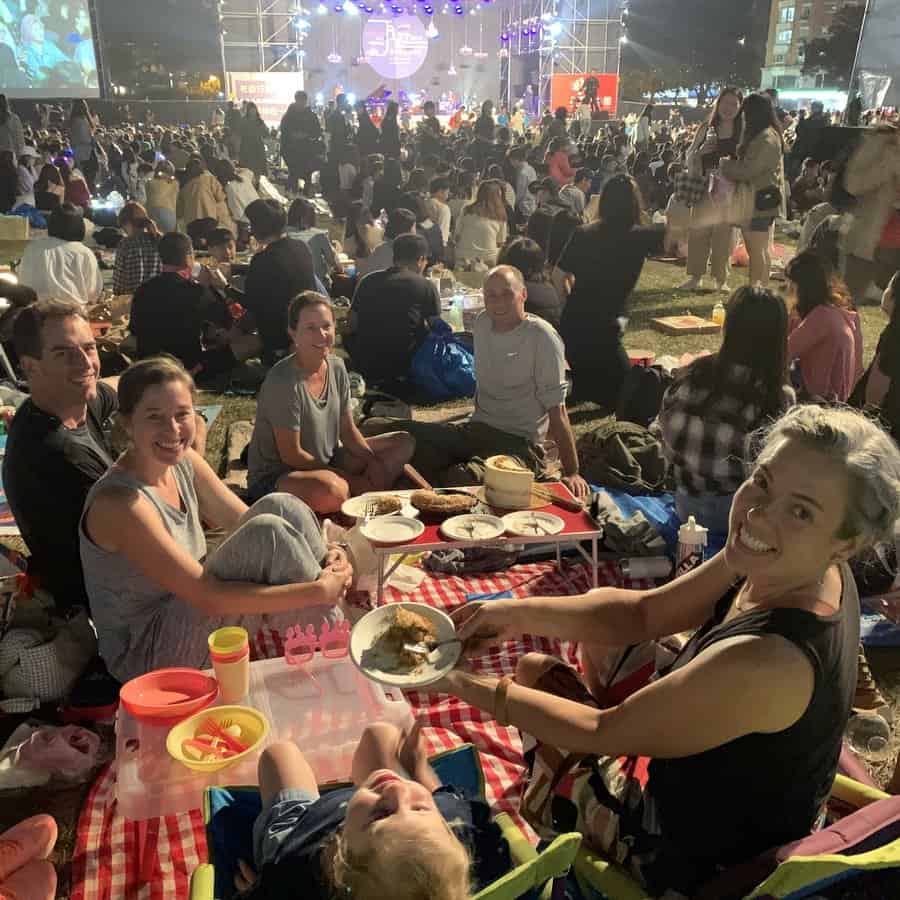 This post is an assortment of happenings between October and December. One could argue that this should be called Winter grab bag. However, the temperature outside is in the high 70’s, so we are going to stick with calling it Autumn.

Three year Eloise and friends partied hard at the annual October Int. Jazz Fest with carrot cake, from Spirited Bakery (run by two sisters and dangerously close to our apartment), hands down the best dessert shop in Taichung. Xiexie to Eloise’s mom, Michelle, for these fun specs which are in full rotation for ALL birthdays now. 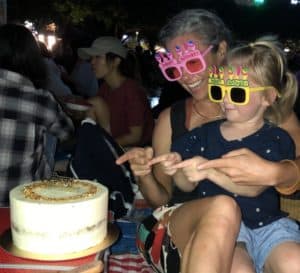 Picks had a work trip back in the states and arranged a long layover in SFO.  He got to see some favorite faces in San Francisco and Portland. He even got a bike ride in across the Golden Gate Bridge to the Marin Headlands with the CRUD gang. Unfortunately, he missed Portland’s Rojo the Therapy Llama’s Retirement Party. 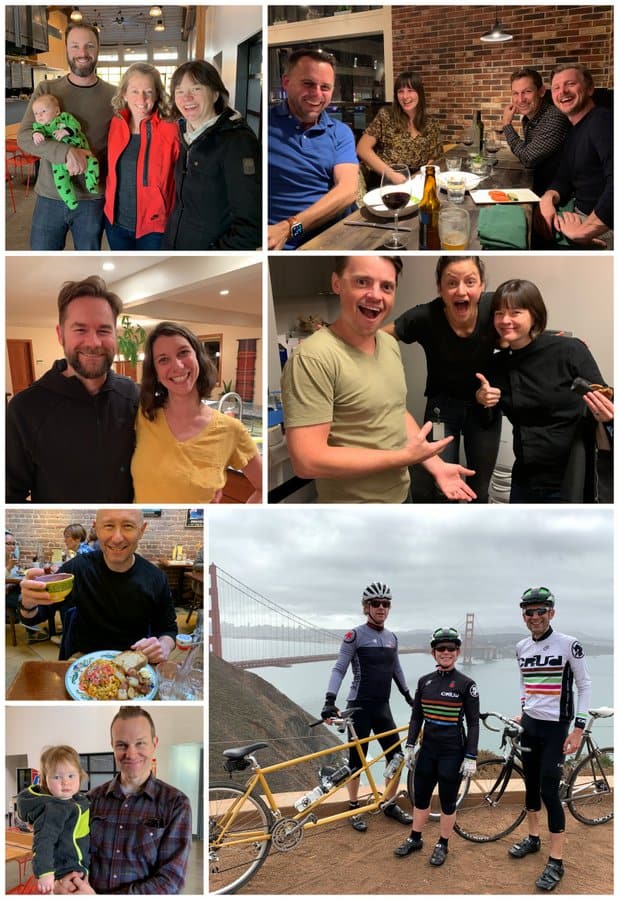 Kirvan our dear friend and neighbor from PDX was in town for Nike biz. She had time to eat ghost pepper dumplings made by Uncle (center pic), cruise the local markets by bike and run a 9K hash with us in the mountains. This hash was extra special because I earned my official hash name: Feisty Forest Pig. Kirvan has hashed already but doesn’t have her official name yet, so you can can unofficially call her Feisty Forest Pig II. We went straight from hash to the largest night market in Taichung (Feng Jia) where Kirvan ordered up the most amazing smorgasbord of local cuisine and we stuffed our faces and then went qipao dress shopping (more on that later). 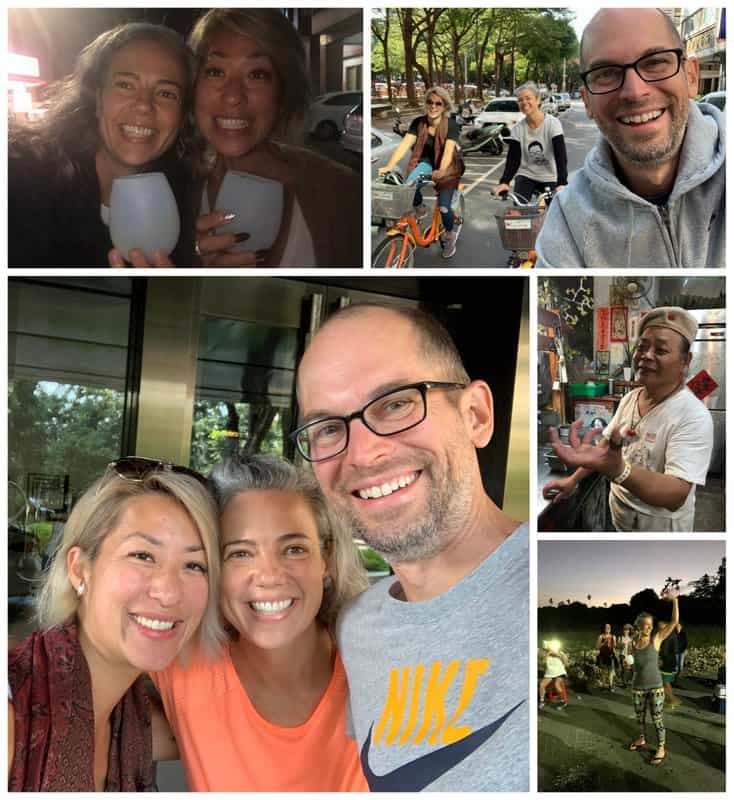 Then Pickles looped around the sun in November. All he wanted was a good IPA which he got. For the record; Pickles discovered stretchy pants around this time and is still talking about them and showing off his athletic moves every chance he gets. #mindblown I guess this is one way to keep marriage exciting? 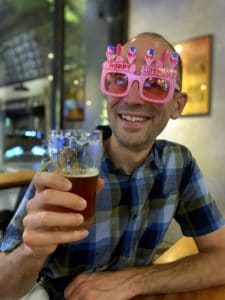 We got gussied up for another five oh! formal birthday party; in a suit and traditional qipao dress. It was Kerri’s birthday (center in group) and that’s her family (her husband Ben is Scott’s boss). They have a hedgehog named Pebbles which I, Passionfruit, considered kidnapping. Patiently waiting for a pet sitting request now. 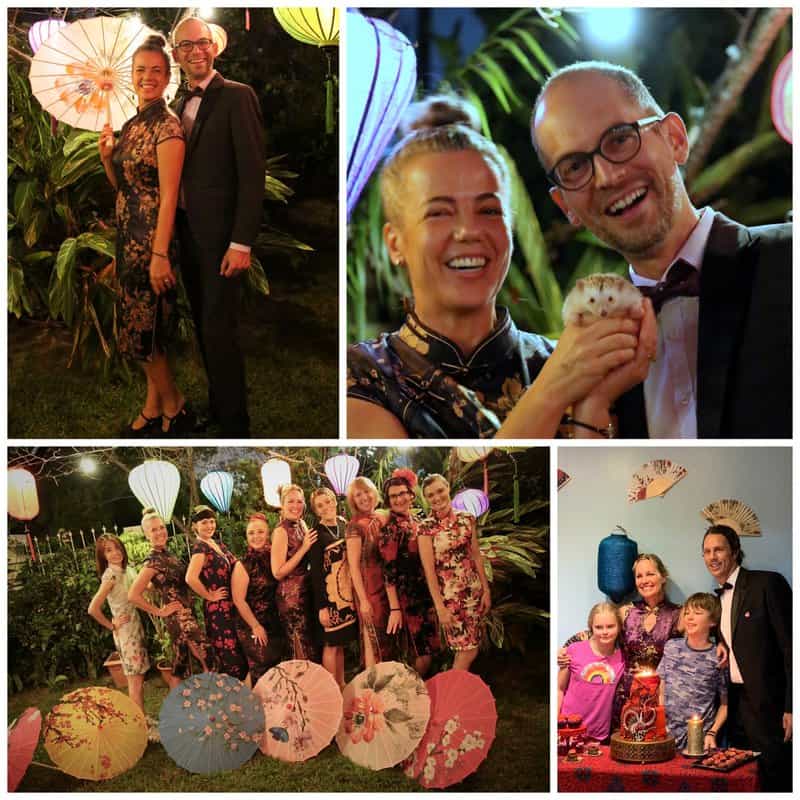 Behind the scenes. The bespoke suit rental for the qipao party, just a couple doors from our apartment. The owner’s dog wasn’t for rent, but he did offer his newsie hat. The whole experience was uniquely Taiwan in a bespoke way. 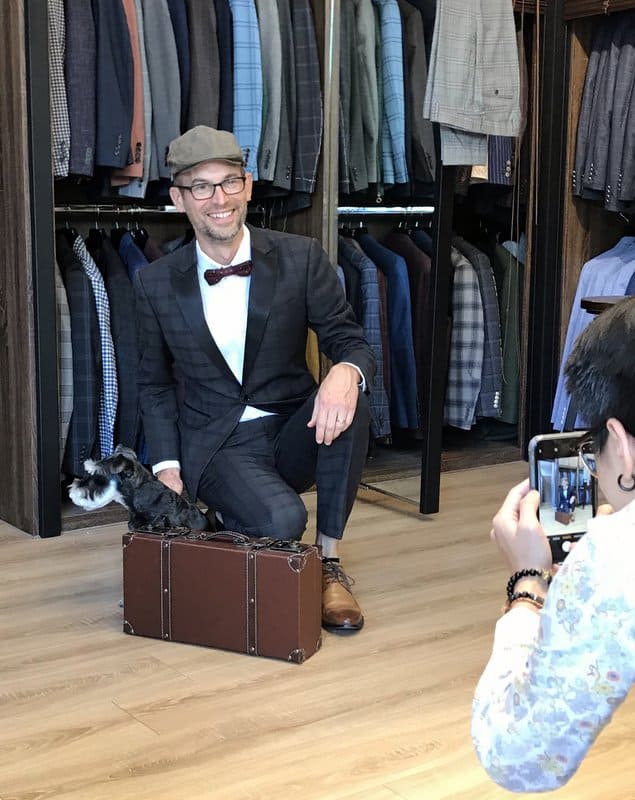 After almost 4 years, someone finally did ask us to pet sit. This little six month old pug named REX lived with us for a week. We bonded. Big time. 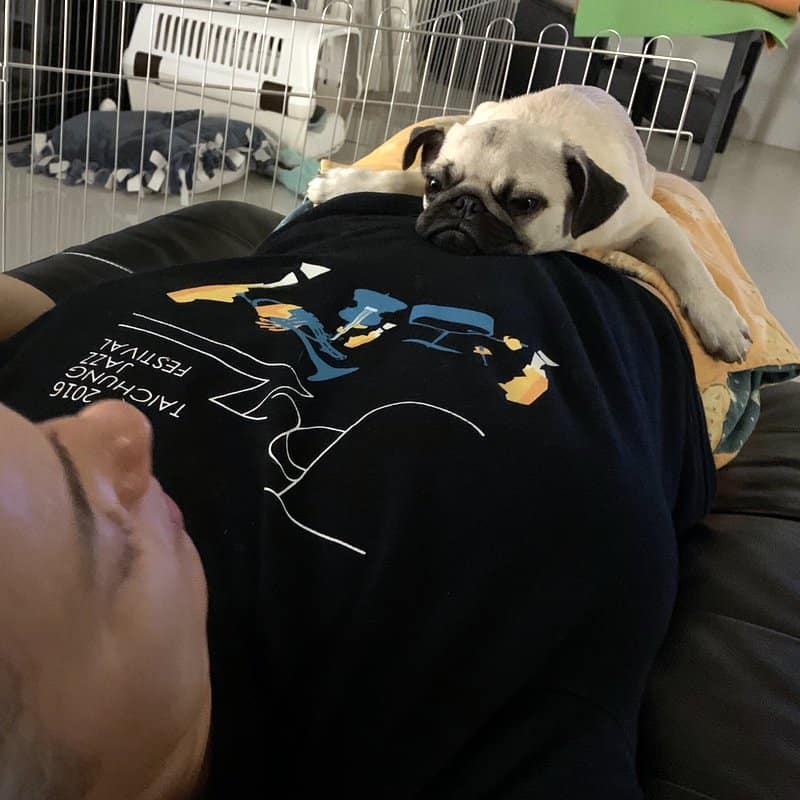 Speaking of cute creatures. Someone over on Jeju Island adopted this! Her name is Birdie. She’s a corgi. We are a corgi family if you haven’t noticed. And yes, the other corgi. Lexi-Lulu is still happily living in Montana with the granddogparents. 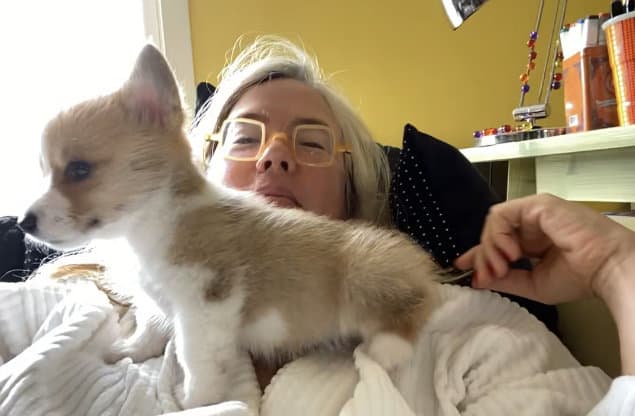 Eloise’s mom and I have become tight friends since they moved here 1.5 years ago. They live 13 floors above us so we see each other frequently for walks, bike rides and coffee dates. Recently I got to help out and pick up Eloise from (full immersion Mandarin) school. When asked what she wanted to do afterwards, she said, “get donuts”, which I seconded. We ate fancy donuts, played with rocks in the park and did yoga at the red lights. She has won my heart, big time, and she keeps my auntie skills sharp too. She also told her mom she’s going to come live with us. 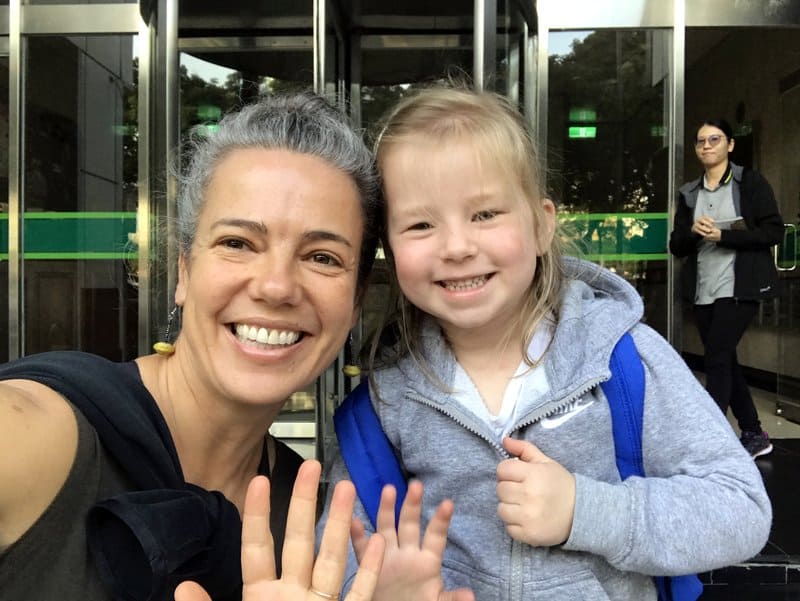 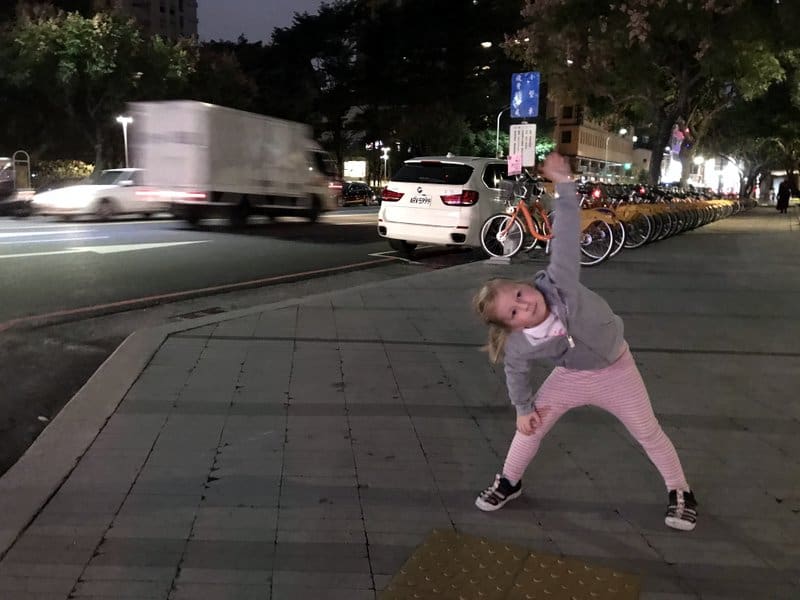 Friendsgiving was a success, thanks to Michelle, who hosted a small gathering and picked up some local duck + Taiwanese tortillas (new to us!) which went lovely with our potluck sides. We then had another dinner with all the Nike expats, hosted by Kate H. I can’t track down who took our group photo, but it was an equally delicious shindig. Our only photo…

While we were in the Philippines Aki decided she needed another Taichung travel/food infusion so she hopped a short flight from Tokyo in early December. It’s been fun to see each other so much after so many years of NOT seeing each other. I love seeing Taichung through friends’ eyes… and she’s an architect so she has two keen ones.

I introduced Aki to her first hash. We power walked 9k! Then Aki introduced me to delicious congee (rice porridge, a comfort food) at a small market stand has been right under my nose for 4 years. I never took to this food before because it’s often served bland, but this variety was delish! Congee comes in all flavors and we had the Asian version of chicken noodle soup. We also enjoyed a Taiwanese tea ceremony at She and Tea and then ate all the dumplings and local cuisine we could find (along with Jenny M. who was in town on Nike biz). Both gals have insatiable appetites for the local cuisine. Ok, we do too! 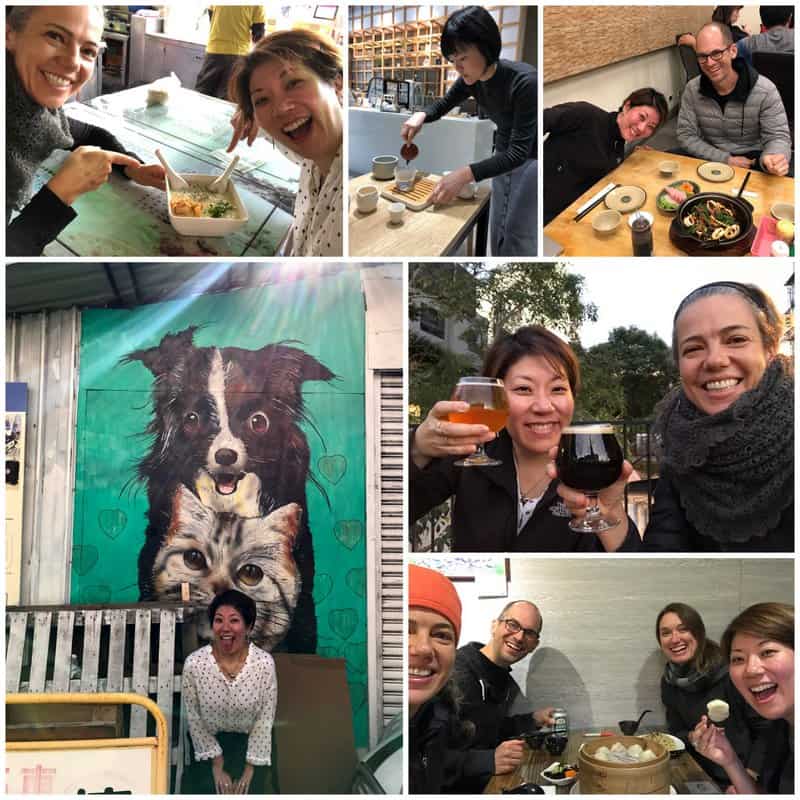 On the heels of Aki’s visit, Erica flew in from California to see what all this Taiwan love ‘n is about. She explored her first 4 days solo on the east coast in Taroko National Park then jumped a local flight to Taichung to see us for a couple days. We immediately inducted her in to the world of hashing and she loved it. It was not an easy trail and required some serious bushwhacking. Hashing has been a fun outdoor activity to do with all of our guests.

‘I feel like I should live here… it’s so satisfying to live in this culture.” – Erica

She then boldly tried guasha (an ancient Chinese healing technique that involves scraping the skin, typically on the backside) which leaves bruising marks. The only shopping was to acquire a new pair of prescription glasses with a blue light blocking filter. Mission accomplished! Prescription lenses are affordable with quick turnarounds here (why these are so $$$ in the USA is beyond us – same goes for phone plans). And her quest to find the finest chocolate croissant wherever she travels was checked off the list, and twice! Erica, like all our guests felt the magic of Taiwan and she is now plotting her Taiwan retirement and to start a software school here (she’s a software engineer). 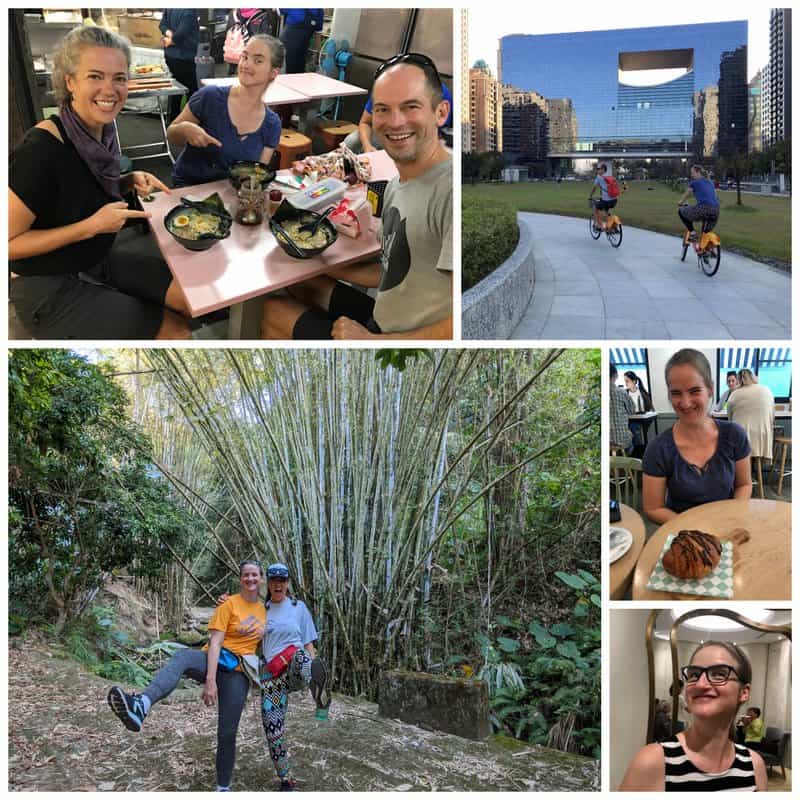 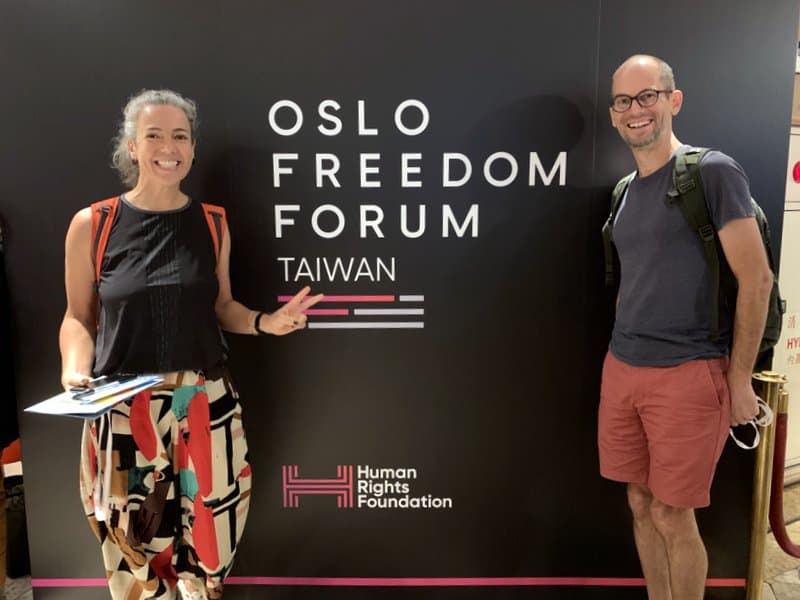 We went a Human Rights Foundation conference in Taipei which had an impressive roster of human rights defenders speaking about the biggest offenders: China, Russia, North Korea and Thailand (Thailand surprised us, but here’s why). I was most excited to hear Yeonmi Park speak who escaped from N. Korea at age 12 (she’s now 26). Her book is harrowing and helped open my eyes to how 25.5 million people live in NK. Another rare glimpse of this authoritarian regime is shown in the documentary, Under the Sun. How the filmmakers got this footage is wild. Check it out.

At the journalism forum I asked what we can do to be better citizens and Cedric Alviani with Reporters Without Borders answered, “Support Independent Press” and Esther Htusan with Associated Press said, “Know the source of what you read. Be a responsible media consumer and do not get your news from Facebook or any social media”. The USA currently ranks 45th out of 180 countries for world press freedom and we supposedly have “freedom of press”?

With love and gratitude for all the things you can’t wrap…. friendships, visitors and high tech digital connections! We miss and love you all. Pickles & Passionfruit

Sign up for the freshest P&P blog posts here: