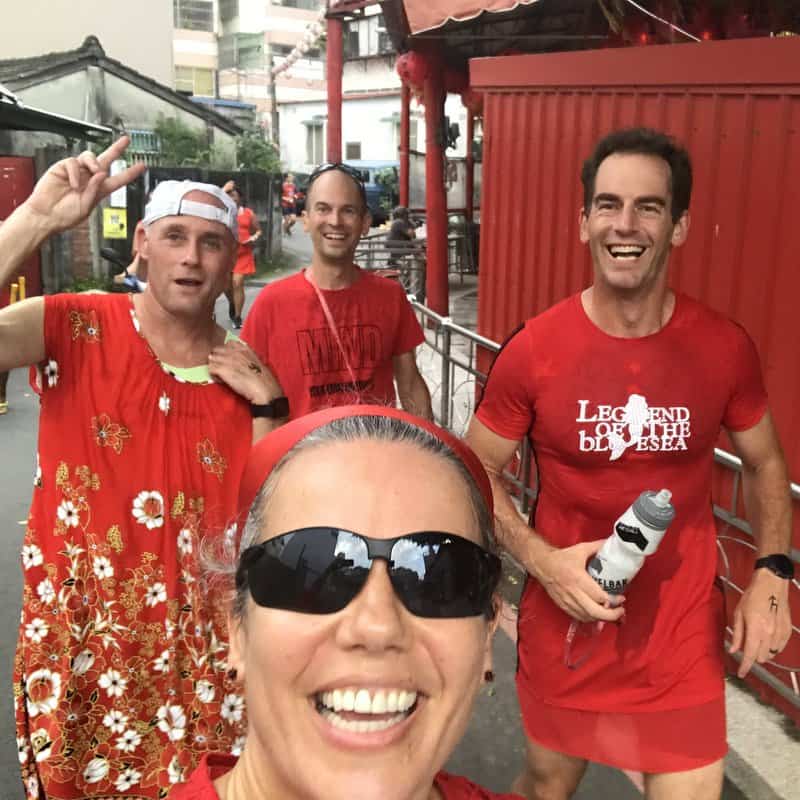 We picked-up a new habit called Hashing. It’s a blend of socializing, exercise and exploration. It’s all jammed in a Saturday afternoon “treasure hunt” with the treasure at the end being cold Taiwan beer, electrolytes, snacks and tomfoolery.

I was intrigued about this activity from my friend Kerry. She’s a regular hasher with 200 runs under her belt. She and I have played Mahjong for the past 3 years and I always enjoy hearing about her weekend hash adventures… where she went… who the hare was… how many bug bites she got, etc. In a quest to explore more nooks and crannies of Taiwan, I figured (with slight trepidation) that it was time to sign up.

The Hash House Harriers (HHH or H3) is an an international group of non-competitive running social clubs. You likely have a club in your ‘hood!

It works like this. Prior to the Saturday meet-up someone is the group (aka “the hare”) lays a trail for the group to run (and a separate one for walkers which is often shorter). This requires a great deal of time and knowledge of local terrain. The route can be anywhere and go anywhere. Then, on the day of the event, we hashers show up with no idea what and where we are running (we are only supplied a google map link to the starting point). At 2 pm, the hare and a buddy (safety in numbers!) take off on their planned trail and leave clues for us to find/follow such as biodegradable shredded paper, flour and chalk. After about 15 minutes we runners take off and attempt to catch the hares. Up and over the hills, through the orchards, rice fields, and rivers all while trying to avoid mosquitoes.

Post run there are lots of toasts, roasts and singing of bizarre songs that we have yet to learn.

Everyone is eventually assigned a nickname in the hash community. We love nicknames but we’re forbidden to pick our own. Passionfruit and Pickles don’t cut it either. Based on other names, it will be inspired by something we do or say that causes great embarrassment.

For our inaugural run I recruited Pickles (because he has sexy legs), Sandy (fellow Mahjonger) and Alex (our neighbor). We chose a unique hash to start with called the Red Dress Run, 7 km, on August 10. Don’t ask why but we had to wear a red dress. Wanting to fit in, I found us all classy local market finds for under $10 USD each.

Temp plus humidity hovers around 105° in August. The thought of running in this heat seemed dreadful so rain is welcome and we got it! The second hash was the day after the Red Dress Run, called the Hangover Run (a unique 2-day combo). We were not hungover so I guess we cheated?

Rain or Shine. We Go.

Our 3rd Hash was during an even greater deluge. Taiwan has been hammered with rains and several typhoons this summer (what you peeps in the USA call hurricanes).

Just when we thought we understood the general gist of these they upped the ante. Our 4th hash this past weekend was a doozy that had us river tracing up to our midriffs and climbing waterfalls. This one pushed us physically and for 8.5 km. The hare was a guy named Lord Dump – a mischievous hare he is.

Until we earn our hash names,
with love from Taiwan,
Pickles and Passionfruit
On-on!

Like documentaries? We’ve seen some thought-provoking ones recently and shared them here. And books… if you haven’t read the Immortal Life of Henrietta Lacks, get on it!