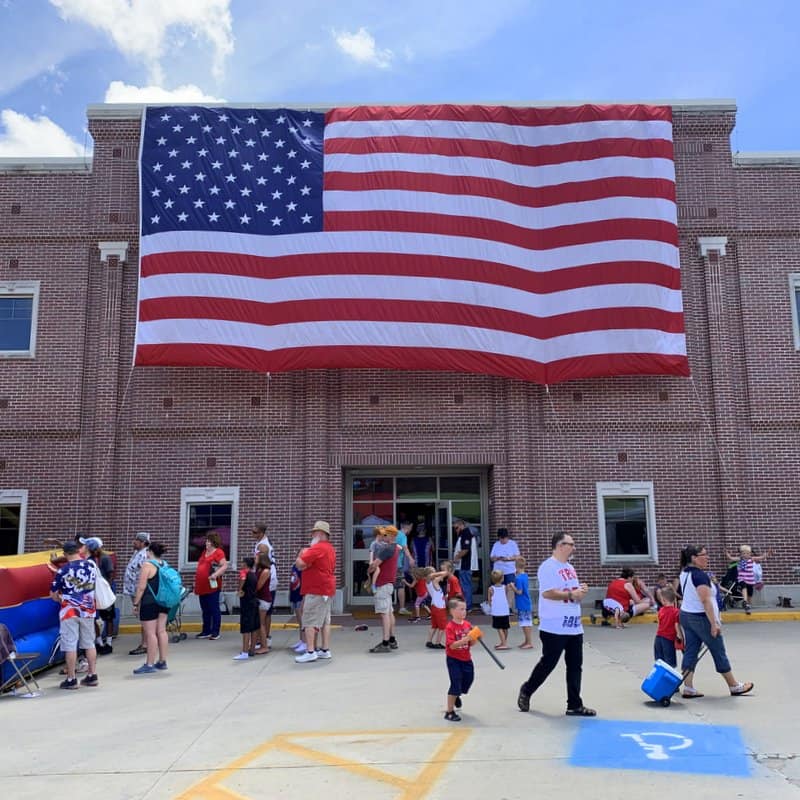 This is a 4 part summer report smooshed up in one. As expats we try to get home at least once year to see all the favorites – it’s an impossible feat. We have favorite places and people all over the USA! Our summer mission was to practice our best aunting and uncling and get to know our fastest growing friends and family. If we saw you, thank you for sharing your time with us! If we missed you, we’ll catch you on a future USA van tour (once we buy one and once we move home).

Pickles and I spent a fast and furious week in Portland. It’s always a blur of a visit with our traditional meet-up at Basecamp Brewing. Come one, come all and BYO kids and dogs. It works every time. Impossible to get a pic of everyone as it’s a drop-in kinda thang, but this was pretty close of the feisty gals. 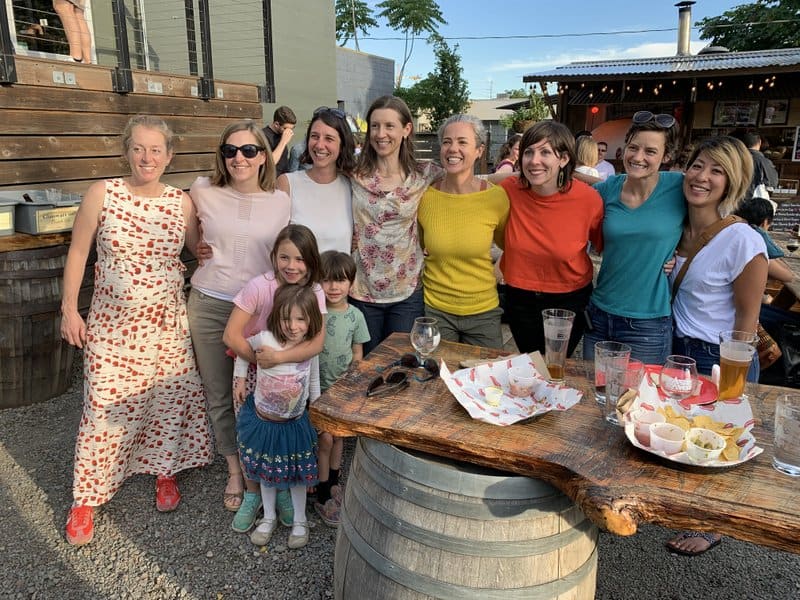 After all the friend hurrahs, we had business to do! We stepped foot in our almost 100 year old house for the first time since we left in 2015. It was in the process of tenant turnover, perfect for a walk-through and catch-ups with the neighbors. Big thanks to Sean for all the garden muscle and whacking back blackberries and to Robin for the nourishment to power through. Friends with tools are cool.

PDX notables:  (1) CBD (Cannabidiol) is in anything and everything imaginable in this city.  (2) We missed seeing the Annual Naked Bike Ride (it was on the OTHER side of the river and we were too tired to track it down – jet lag is rough going eastward).  (3) Portland seems to be figuring out how to be a big city due to a quickly increasing population. Way too many living in extreme poverty (i.e. without housing), suffering from drug addictions and a lack of mental health care for a 1st world country. We desperately need to elect people who care about PEOPLE, not $ and corporations. Without health, we have nothing. These observations are in stark contrast to Taiwan who in our opinion takes care of its people.

P&P parted ways in Portland to see our immediate tribes; Pickles to Nebraska and me to Montana.

The last time we were together was July 2015! My youngest sister, Shawnee, has two boys; Kieran (age 3) and Sammy (7) and is partner at McMahon Winters Strasko, LLC (criminal and divorce specialists) in Lancaster, PA. My other sister, Tatiana, is equally talented and still teaches at KIS on the dolphin surrounded island of Jeju, South Korea. She and her husband, Joe, come back to Montana and Wyoming every summer.

Living abroad neither of us get to see our nephews and nieces much. Kieran was born two weeks before we moved to Taiwan = LOTS of auntie catch-up to do and I was up for the task with multi-daily races around the block and Connect Four with Sammy, snuggles with Kieran and creating catch phrases like “Let’s hail a Poober!”, because that’s hilarious.

Montana & Wyoming notables:  (1) The air is so clean! I never get enough of being outside and didn’t mind one bit that I was UPGRADED to the Westie camper in the driveway because the house was at capacity.  (2) Wendy’s garden (she’s my step-mum and Shawnee’s mum) was bursting with all types of lettuces – primo fresh salad eating season.  (3) Madga, my friend and housemate back in Boston, circa 2003, was traveling in Yellowstone with her husband and 7 year old son, Kaz.  (4) Montana Folk Festival in Butte which features the best traditional performers in the nation – all free – was happening. My parents go every year and I was finally home at the right time to partake.  (5) Always lots of hiking and Yellowstone River floats.  (6) First time father/daughter van road trip.  (7) Face to face client lunch with Greater Yellowstone Coalition 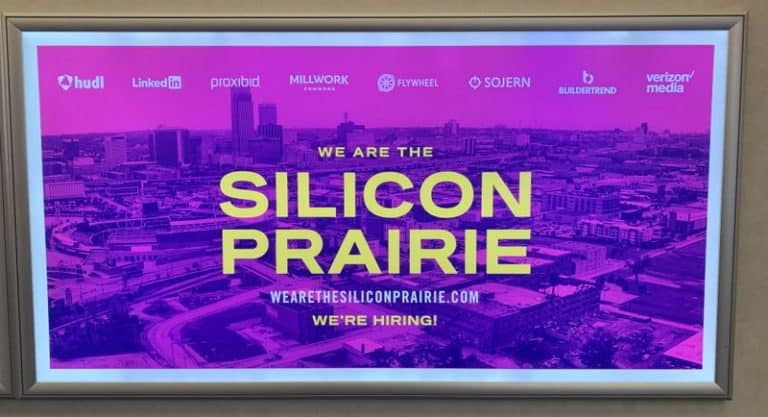 and yes, they are hiring.

After being reminded by my parents that I have not been back to Nebraska for 3 years, I decided to make a trip over the 4th of July holiday to catch up with family and friends. My brother, Steve and his wife Jessette, have three kids. They’re not busy at all; Lily (9), Damon (5) and Gigi (3). I caught up on some kid-friendly, fun uncle stuff like setting off fireworks in the street.

Not only was it great to see family, but it was a great chance to see Team Toth (good friends and the late Poppy’s adopted family).  It was also good to see the Murray family back in Lincoln.  Last October, after 21 years in NYC, PJ and Allison made a triumphant return to Nebraska with their three girls Katie, Nora and Ellie.  In fact the extended Murray-Sanchez-Masi fam was in town for the 4th and it was a good chance to see Allison, Paul, Mike and their families with a total of 9 (!) kids.

Now back to Montana with Passionfruit…

My fam lives about 60 miles from the North entrance to YNP (America’s FIRST National Park). This is where we met up with Magda and her son, Kaz, on the tail end of their family vacation (Greg, her husband, had to get back to work so we missed seeing him). 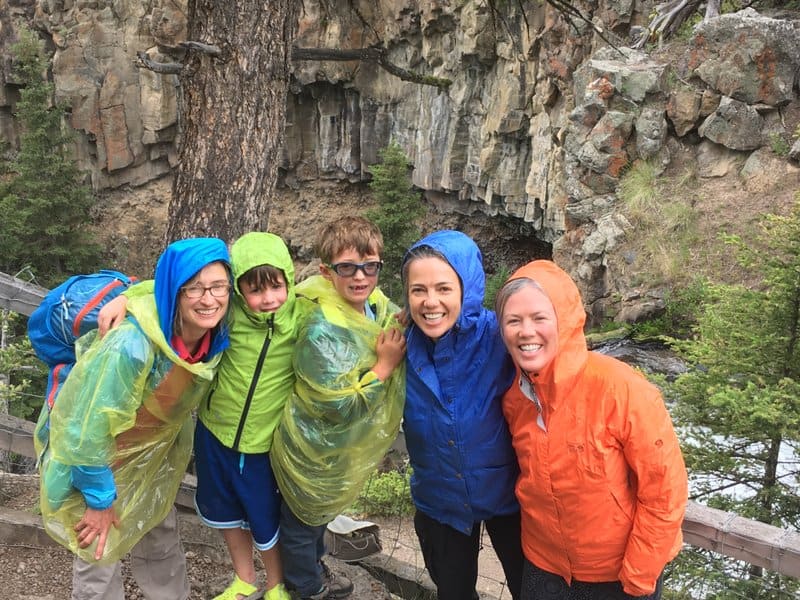 This fest has a beautiful history! The organization was founded in 1933 as the National Folk Festival Association. Thanks to Sarah Gertrude Knott (1895-1984). It’s the oldest multi-cultural celebration (of many nations, races and languages) of traditional arts in the country. It’s traveled to 28 communities in the USA with many successfully sticking as locally run events now, like the Montana Folk Festival in Butte. Other locally run fests are in Lowell (Mass.), Bangor (Maine) and Richmond (Virginia). Highly recommend!

My father-in-law, Jerry Berggren of Berggren Architects is a historic preservation architect and was doing a couple museum assessments in Wyoming and Montana. Lucky us, he had time to stop by Livingston for a home-cooked pancake breakfast. No time for tango dancing this time. 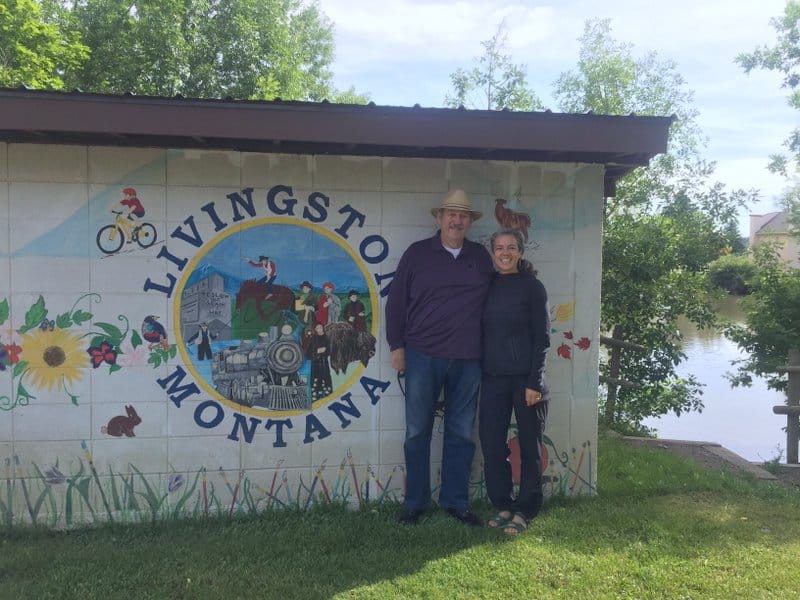 I got some face-to-face client time with Greater Yellowstone Coalition, based in Bozeman, MT – something I don’t get much of living so far away. I’ve worked with this org. since 2014 doing visual communications and their big identity rebrand. I love this org and everything they do – protecting what natural beauty still remains in the ecosystem surrounding Yellowstone Nat. Park. Pickles and I enjoyed a couple of their annual not-for-profit supported bike rides through this ecosystem too: Cycle Greater Yellowstone (toot toot, also my work).

Since Shawnee and the kids flew back to PA and Tati was busy with family-in-law in Wyoming, my dad and I hit the road in the Westie. In typical fashion there was no plan (that’s a four letter word to my dad). First stop… Billings, MT for Mexican food because we both love it and there is NO good Mexican food in Taiwan. 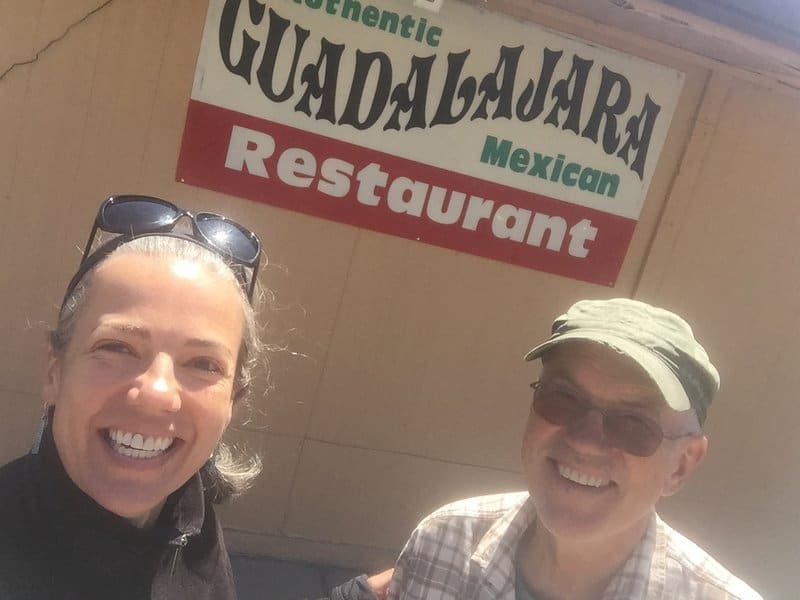 We did not ask you white men to come here. The Great Spirit gave us this country as a home. You had yours. We did not interfere with you. We do not want your civilization.
– Crazy Horse

Next stop: Little Bighorn Battlefield, in Crow Agency, MT, a National Monument to the 1876 Battle of the Little Bighorn (aka Custer’s Last Stand). In short this is where the Lakota, Northern Cheyenne and Arapaho defended their land against the U.S. 7th Cavalry, lead by real full-of-himself Custer. Custer lost and was killed at this battle so it was victory for the Native Americans. However, we all know that was a short-lived victory because the Native Americans have not been able to preserve their way of life and their lands continue to be stolen by white men. This is beautiful countryside and the Nat. Parks Service did an excellent job sharing this history.

Nest Stop: Not shown. We spent the night at Tati’s husband’s mom’s house in Sheridan, WY. The following day we hit the road to Bighorn National Forest. I fell in love with this one. Nat. Parks and Forests of the world are truly the last best places on earth. Let’s keep funding and protecting them, ok?

As you drive through this Forest there are park signs that point out how old the rock is… just 430-500 million years! Nice reminded that we’re mere mortals here.

Next stop: Big Horn Medicine Wheel in Bighorn Nat. Forest. We hiked a couple miles to reach this 250 year old Native American wheel-like structure made of white limestone. It’s at 9642 ft (2939 m), near the summit of Medicine Mtn. Ceremonies still take place at this sacred place and offerings of sage, tobacco and antlers can be seen in the center. 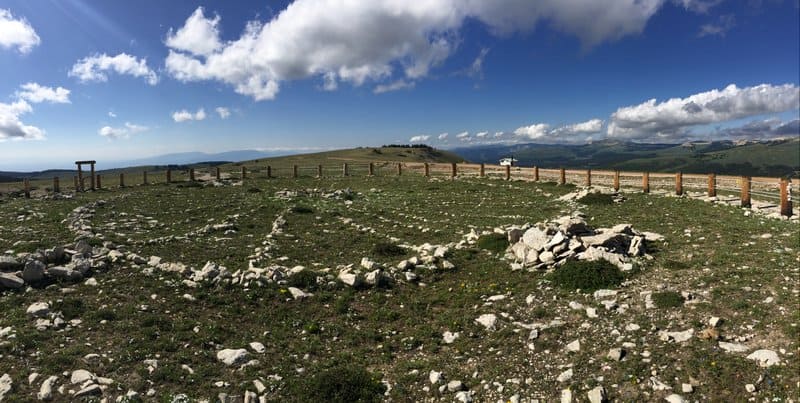 Next stop:  Buffalo Bill Dam in Cody, WY along the Shoshone River, 45 miles east of YNP. It was the tallest dam in the world at 325 feet in 1910! When the last bucket of concrete was poured, it was January and 15° below zero. This was an amazing feat of engineering in really harsh conditions. Most of the work was done during the worst times of the year in deep winter when the water levels were low. Spring run-off and flooding ruined many efforts. In 1907 laborers (Wyoming’s first strike) demanded a raise to $3.00 for a TEN HOUR DAY. They got it. Highly recommend a pit stop here on your way in or out of YNP’s east entrance – it’s free too! 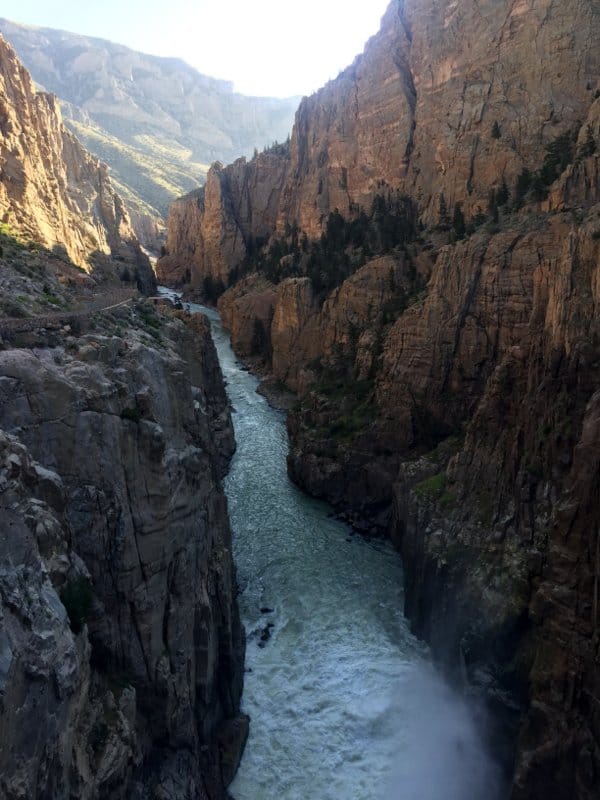 We continued to drive east through the Shoshone Nat. Forest, USA’s first National Forest, thanks to President Harrison in 1891! We entered the YNP’s east entrance and stopped for breakfast at Eagle Creek campsite. The campgrounds on this side of the park are beautiful along the Shoshone River and few tourists for July.

Next stop, Yellowstone Mud Volcano featuring lots o’ bison. There are over 10,000 hydrothermal features in this park and Jack would like to point something out… 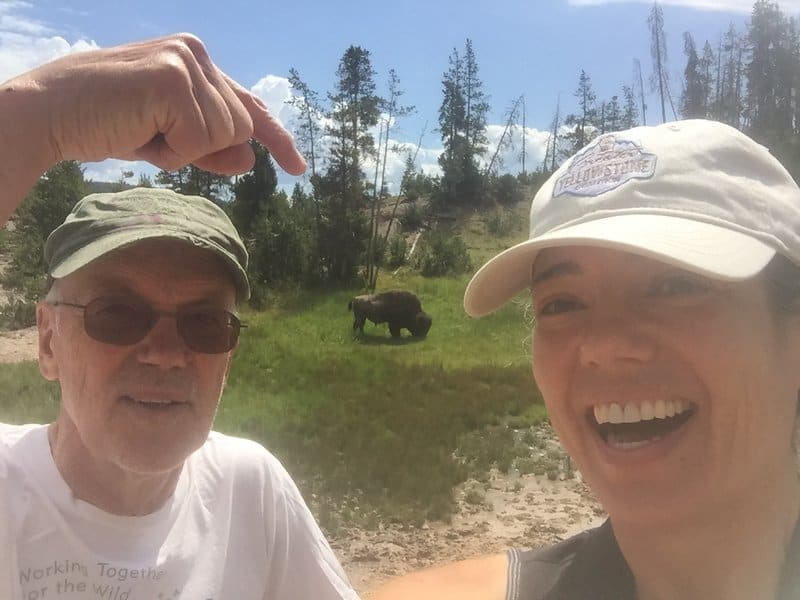 Keep your distance around wild.. WILD life or ya might experience this. 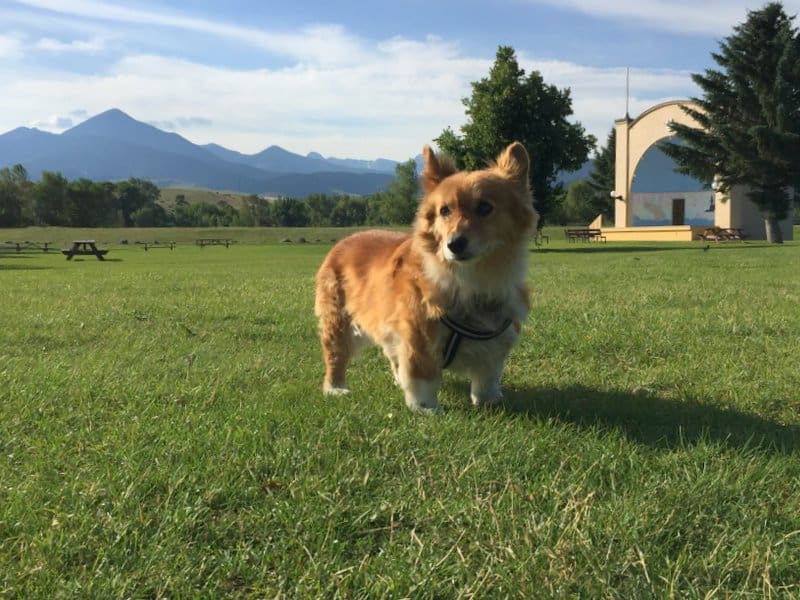 Got two chill river floats in on the Yellowstone River too. 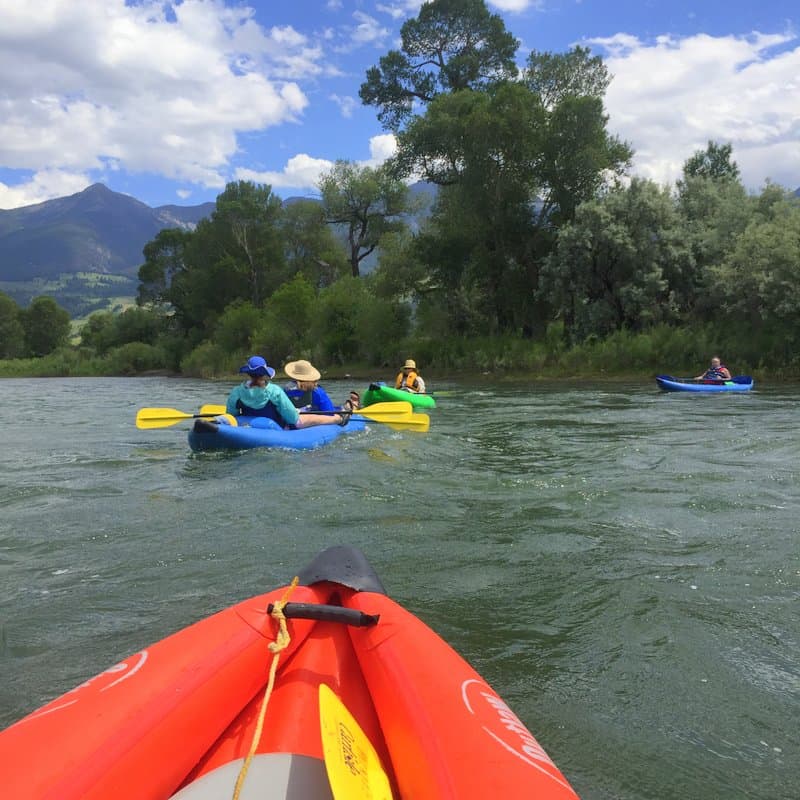 We tried real hard to make the most of it without Scottie around. It was hard, but happy hour helped. 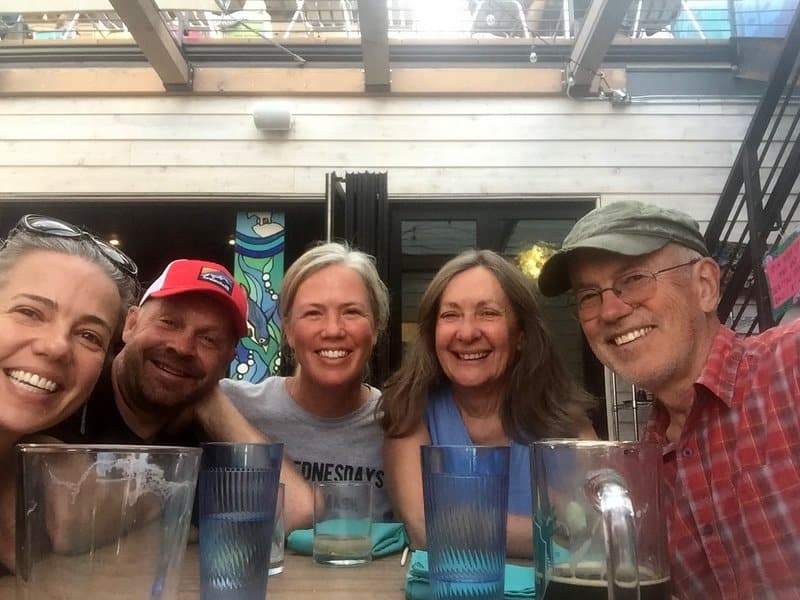 The last couple days of the USA visit ended here. Tat and I flew to Minneapolis (a.k.a. Minne Haha) and met my mom, Katy, for a 4D3N art-infused city exploration. None of us had been before and we were all impressed with how vibrant and culturally diverse this city is. #IlhanOmar 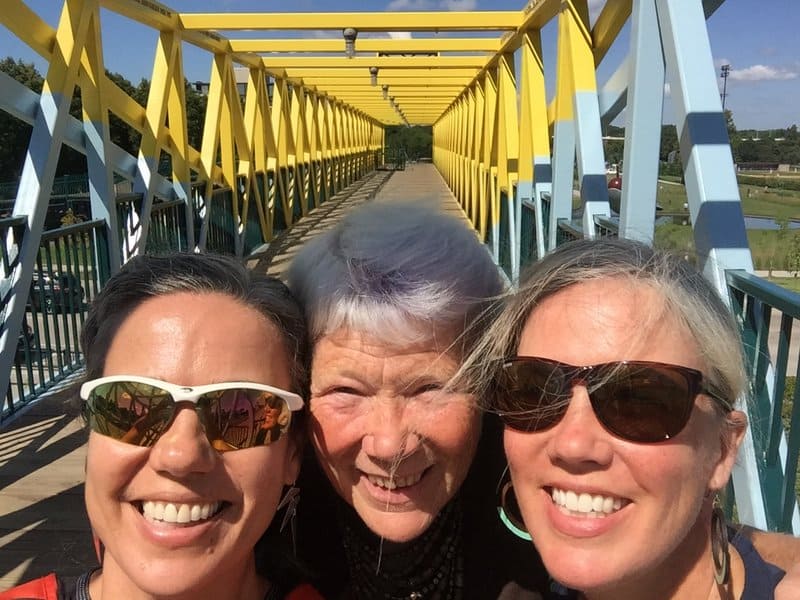 Scott returned early July and me, end of July. Now it’s August and we have some fun TAIWAN posts coming up so stay tuned. We love you P&P subscribers and yes, we are mortified of USA’s behavior on so many fronts. Can we, please…

1.  Practice tolerance and empathy for all, especially those being marginalized.

2.  Use our privileges* to better the world for others instead of destroying it for others. Those not affected by current events are benefiting 100% from privilege. *include: race, class, gender, sexual orientation, religion, education, gender identity, age, physical ability, passing, etc. Forms of Privilege.

If you’re looking for a kind person and can’t find one, just be one (and help elect one).