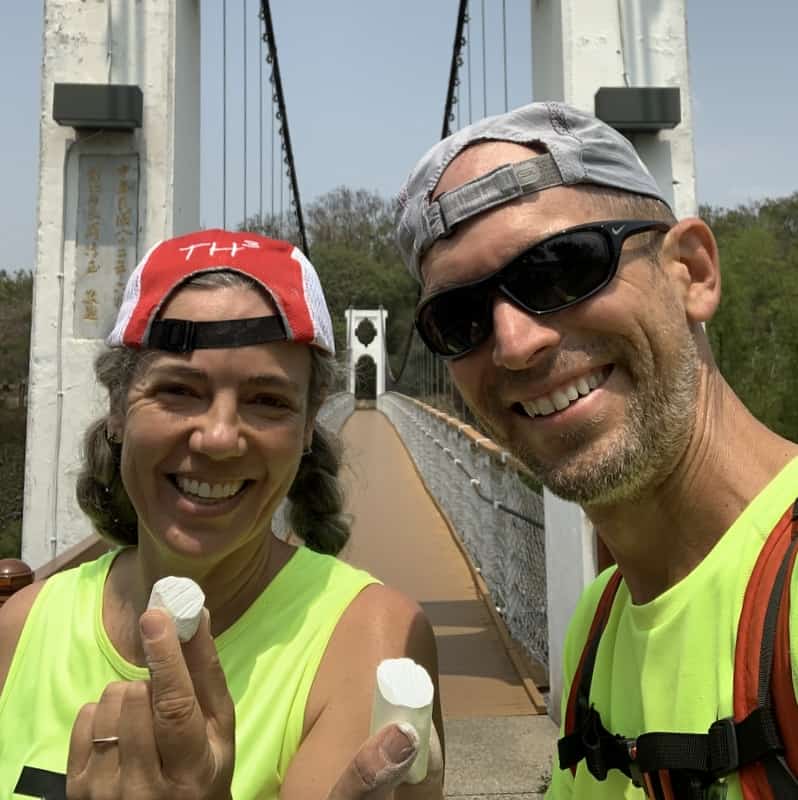 We have been running with Taichung Hash House Harriers (TH3) for the last year and a half.  We have always enjoyed exploring areas around Taichung that we would never find on our own and spending Saturday afternoons with a fun group of people.

No hares, No run

If you’re not familiar with what hashing is, it’s basically a running club that meets weekly. What makes it unique is that members of the club volunteer to set a trail route and they (aka the “hares”) keep details of the route a secret. On Saturday afternoons everyone meets up and the hares start running the route they made and leave clues behind them such as chalk marks, shredded paper and flour. Around 10-20 minutes later, the remaining club members try to catch them as they look for clues to stay on trail. It’s more of a social run and less of a race, but our club has some seriously good athletes in it!

We have been co-hares, separately on previous runs, but we only supported others who planned the trail. We decided that it was about time that we set our own trail, as they say “No hares, no run”,  and what better time to do that than the weekend of our 12th wedding anniversary.

Finding a trail was no small task.  Our favorite hashes include a little paved road, a little hiking trail and a little bushwhacking.  Over a span of a couple of months, we spent our weekends scouting around 4 separate locations. We finally settled on a location in Changwha that offered a great combination of all these things.

Once all the trail details are finalized, the start location is posted on Taichung Hash website about 3 days prior to run day. We left two clues in our description: “Eagles” = area is known for eagle watching and “Dreamers” = name of the pro basketball team’s stadium. 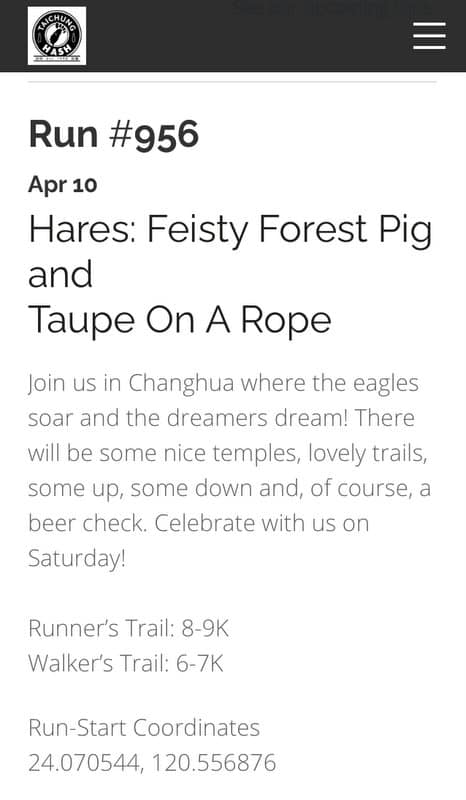 We got lots of good advice from experienced hashers.  The best was from Ryan, “Don’t make it epic” and “Don’t focus on distance, just do a good 2-hour walk and that will be a perfect distance for a trail run.”  From Thomas, “Mark more trail than you think you need to”.

With that advice, we scouted the area in Changwha a couple more times to outline the trail route, plan our checks (this is where there is a break in the trail and people have to scout to find the pick-up clue), and plan a beer check about 1/2 way.  A beer check is a hydration station of cold beer and electrolytes because it’s HOT AS HELL here.

We even used our basic Mandarin skills to get permission for our running club to run through a beautiful temple. The temple keepers were enthusiastic and immediately marked their wall calendar. The day of the run, they were all outside with smiles on to great us.  Taiwan continues to be a very welcoming place for foreigners!

Some people will do a “live” hash, where they make the hash marks during the run, while they are being chased.  That’s a bit intense for us, and we’re not that confident, so we went to the trail early to pre-mark the trail, so it would be all ready to go for the runners.  We were feeling good about that decision as we spent 3 hours marking the trail.  Stopping and/or bending over a hundred or so times to write the classic “h” with directional arrow adds some time!

At 2 pm we, the hares, started to run the trail. After we made the first turn and were out of sight from the runners, Feisty, exhausted from setting up the trail all morning, looked over and said, “I don’t think I can do this!!” Taupe then shared the shortcut straight to the beer check he had secretly planned. This shortcut secured him HOTYA (Husband Of The Year Award). 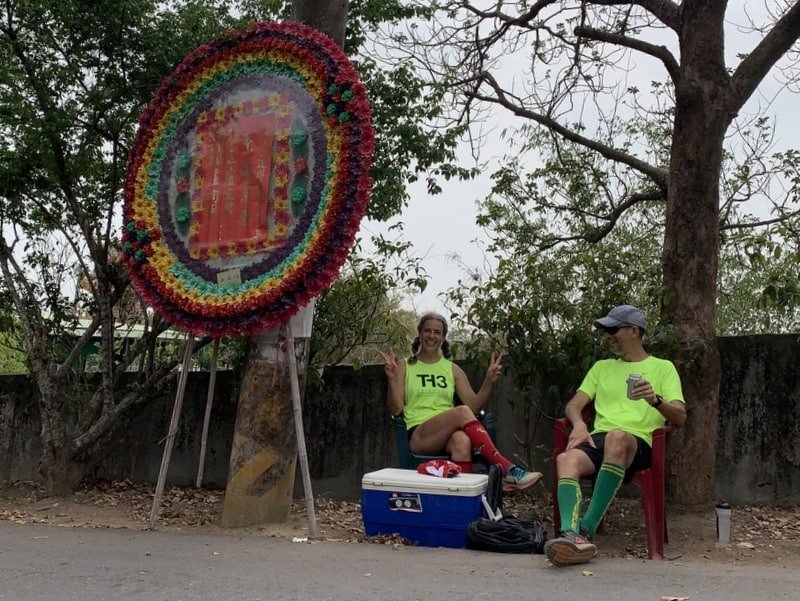 We got to the “beer check” way ahead of the runners and greeted them with an ice-cold beer as they made their way on to complete the trail.

The down-down is what we hashers call the “social circle” held at the end of the run. It’s where we all relax, eat, drink, sing, roast/reward/punish each other, and mostly celebrate our sweaty accomplishment together.

Happily, people enjoyed the run.  We kept Dump (Thomas) happy by having a well-marked trail.  Best of all, no marriages were damaged in the making of this run.

The next day we continued to celebrate our 12 years together at our favorite Taichung restaurant, SUR. We also continued our tradition of opening up a red envelope given to us from our friends on our wedding day back on April 11, 2009.

“On-on” is what hashers shout out to communicate they have found the trail.  It’s very satisfying to say and hear!  Sweaty hugs from Feisty Forest Pig & Taupe On A Rope

Want the freshest blog post to pop up in your email? Sign up here and check your email for a confirmation.