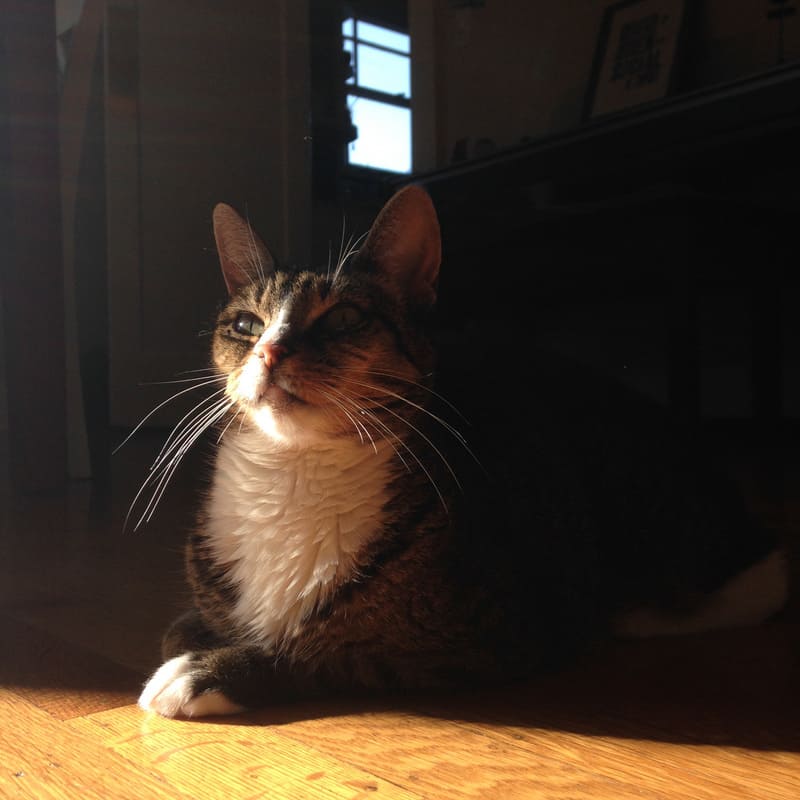 Poppy Oishi Heckles peacefully passed away on May 22, 2019 in the care of loved ones in Lincoln, Nebraska. She was 14 years old, yet lived more than 9 lives.

Poppy was born in the late spring of 2005 in Lancaster County, Pennsylvania. She spent her first days down on luck, wandering the streets, getting rough-housed. Things turned around during a chance encounter with cat lover Tatiana Heckles, who rescued her off the street. That summer, Poppy was formally adopted by Sarah who lived in Boston.

Poppy’s first and formative year of life was lived in Boston with a focus on becoming besties with all Oak Square Ave. gals and figuring out what all the white stuff was falling from the sky.

In 2006 she moved to San Francisco, acquiring her first airline miles flying in cabin, never cargo, because that’s how she rolls. She eventually settled in to The Castro ‘hood where she had year round outdoor balcony access which offered breathtaking views. The weather in SF suited her as did the cushy wall-to-wall carpet. It’s here where she met Scottie B. Together they played many games, such as “Kitty Defender” and practiced pro wrestling moves like “kitty backbreaker”.

Two years later in 2008 she headed north to the Pacific Northwest, where she welcomed Scott as a new housemate, in Portland. She lived first as an urban dweller in a modern downtown loft and then moved to the east side where she got her first taste of yard life. She was most comfortable lounging in any sun beam, particularly on the back porch. When the heat got intense she found the private shade of the apple tree or under a Montanarondack chair absolutely delightful. Come winter, she would wedge herself between the upright piano and the heat vent or belly up in front of the gas fireplace.

Her BFF, the robot feeder, always got her cruising:

Her catatarian efforts were few, yet big-hearted. She will most be remembered for sharing her personal living space with yet another housemate and new in-law, Lexi-Lulu the Corgi in 2014.

Little known facts about Poppy Oishi is that she enjoyed playing Connect Four, was extremely well-read and even co-authored “How to Talk to your Cat About Evolution” which was nominated for The Royal Society Science Books Prize in ‘08. Her favorite piece of literature (which was heavily cat-eared) was Inspur-r-rational Stories for Cat Lovers by Niki Anderson.

Over Thanksgiving 2015 she relocated to the fifth state she would call home, Lincoln, Nebraska. She suffered a short spell of separation anxiety when Sarah and Scott relocated to Taiwan to fulfill a work assignment, but it subsided quickly once in the Team Toth snuggle zone of Tony, Deb and their children Zoe and Greylee. Poppy, always a Husker fan, never missed a “Go Big Meow” moment, a chance to play cards on the bed or a spa date with Zoe.

Poppy enjoyed sleeping in her kitty saucer, running towards the sound of kibbles falling in her robotic food machine, gentle touches, giving soft-paw and doing kitty pull-ups to get up and on the bed and couch.

For those that had the pleasure to meet and snuggle her you know her heart was sweet and brave. We will deeply miss the tripod-stanced Professor Wobbles. And we will forever be grateful for the Toth family’s love and kindness.

Remembrances of your time with Poppy are welcome in comments for all to enjoy. To avoid crashing our blog’s server, a complete photo album featuring her robust life and those dear to her can be viewed here: https://photos.app.goo.gl/syobvrYaekmEgYvN8

Thank for you all the love and kindness you’ve ever shared with Poppy.