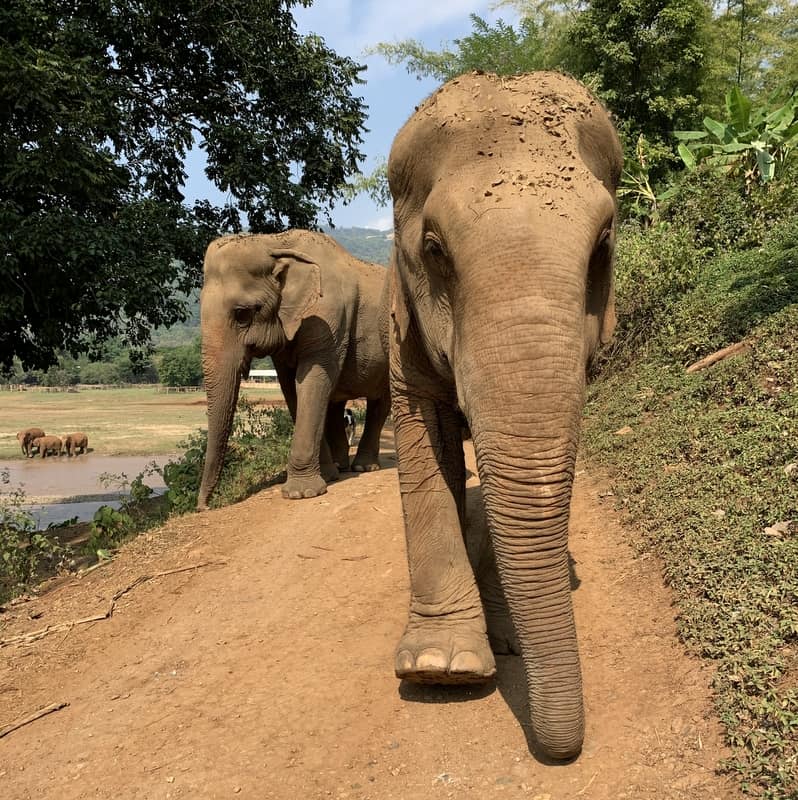 We wanted to get away for the Christmas and New Year holiday. Christmas isn’t a National holiday in Taiwan, but it is a good time to explore Asia while the US is on holiday. Plus, we were craving some good authentic Thai food. We found a short-ish (4 hours) direct flight from Taipei to Chiang Mai in Northern Thailand. 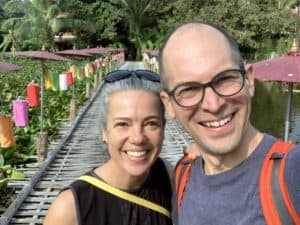 Pickles had been here in 2004 with a buddy (Brandon Brown!), staying in cheap flophouses and dirt bagging it – of course. I had never experienced the northern region and we both have a fondness for Thai food which is incredibly region-specific throughout the country, often loaded with fresh vegetables and spices. Since quality Thai food (of any region) is unaccounted for in Taiwan this was a travel motivator.

Chiang Mai is a stirring place to visit that is ON at all times. Massages offer a peaceful respite as did our urban open-air apartment with a hammock. We spent most of our time in the Old Town which is bustling with markets and international tourists (we heard Mandarin, French, and German the most). Old Town is a 15-minute taxi ride to the Chiang Mai airport so it’s easy in and out. We find the culture to be consistently safe and honest just as we did in 2010 when we visited Ko Lanta in the south. 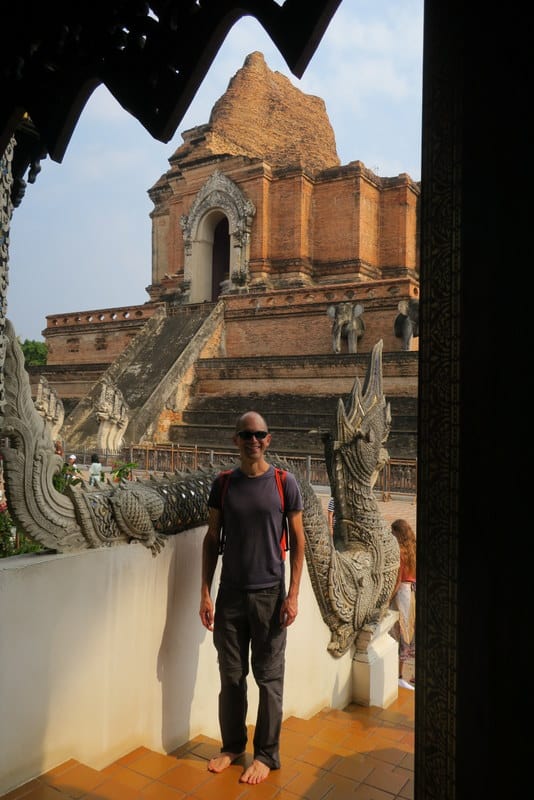 Chiang Mai is the largest city in northern Thailand and is 15.5 square miles with a population of 160,000 and over 300 elaborate Buddhist temples (or wats in Thai). Dress code is important to recognize as too much skin will get you turned away. I always packed a scarf for the day to cover my arms. It’s also handy to wear slip-on shoes as these need to be removed before entering most temples. 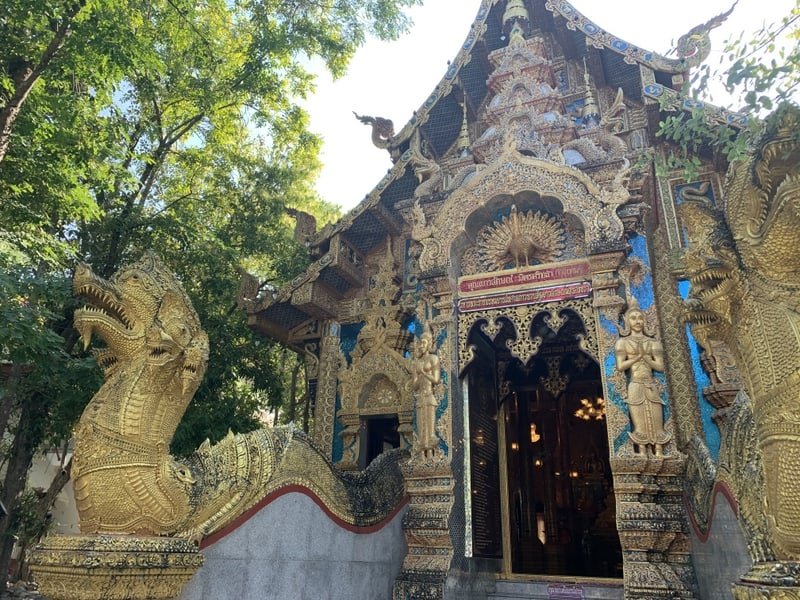 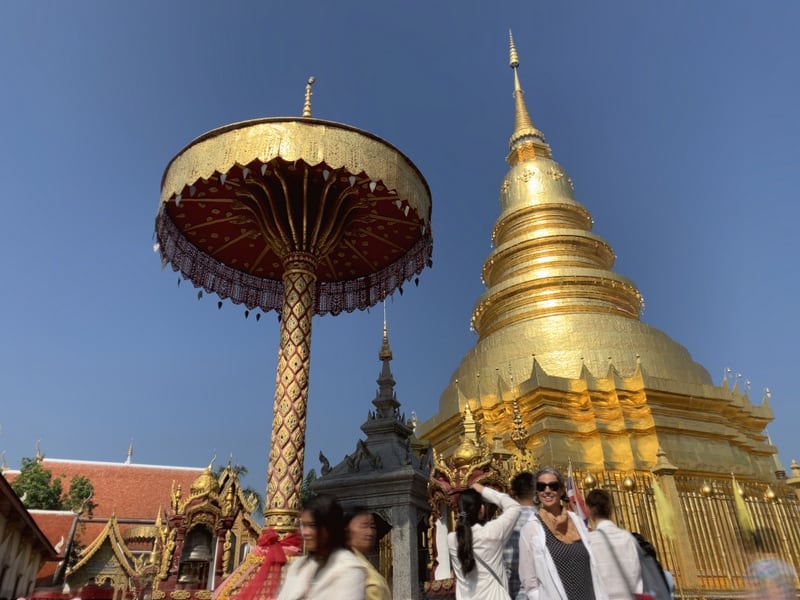 At the airport immigration there’s a sign that states, “To buy or use Buddha as decoration and tattoo means no respect and wrong”… so we nixed the Buddha tramp stamps. 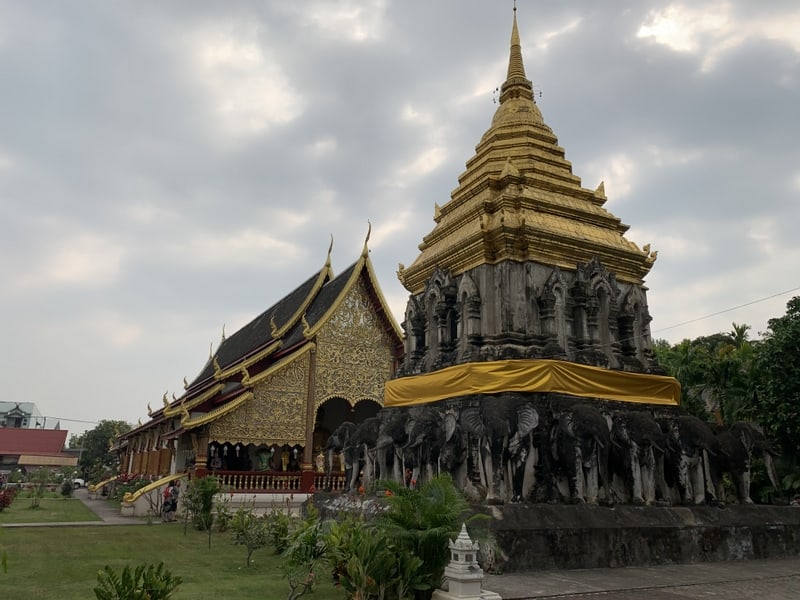 Alive and well in 2020! “It is believed that it humiliates and ruins the sanctity of the city pillar”. Therefor, “Men Only”. I have no words for such ignorance.

Shame, stigma and misinformation surrounding menstruation contribute to serious human rights for women and girls! Unfortunately, Thailand is part of the problem and not the solution when they post signs like this.

Temple exhaustion (and period shaming) is real which is a good reason to slump in a comfy chair and get a Thai foot massage. Foot massage parlors are plentiful and will often include head, back and shoulders. Since a one hour massage was 200 Baht ($6.00 USD), we averaged a massage a day. Full body massages are very popular, but due to the very real possibility of getting injured we stick to the foot massages. 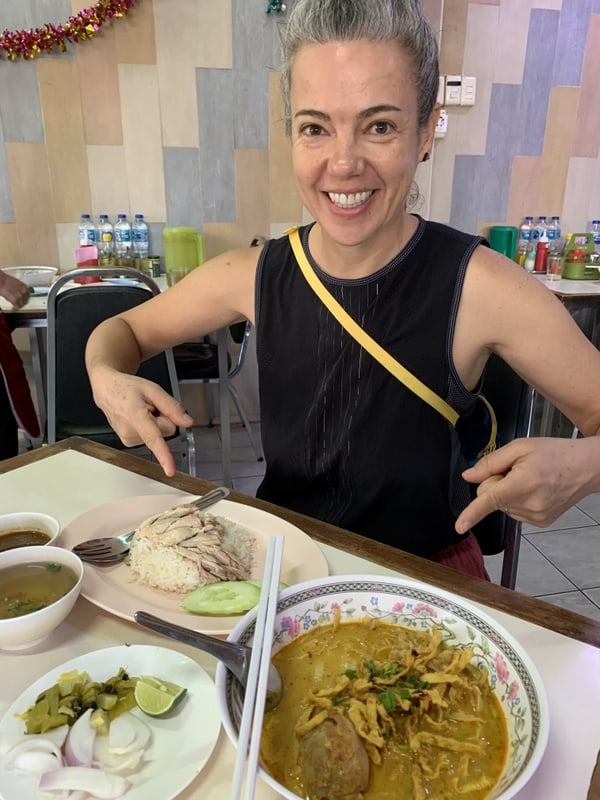 Chiang Mai is known for Khao Soi. THIS IS WHAT WE CAME TO EAT… and eat we did, every single day, even for breakfast. This dish has deep-fried crispy egg noodles and boiled egg noodles, pickled mustard greens, shallots, lime, ground chilies fried in oil, and tender fall-off-the-bone chicken meat in a curry-like sauce of coconut milk. This dish is common in Myanmar and Laos as well.

Khao Man Gai is the other reason to visit. It’s the Thai version of Hainanese chicken rice (created by immigrants from Hainan in southern China), is a typical and widely available street food dish in Thailand. For those back in PDX, let’s all give a bow to Nong Poonsukwattana (originally from Bangkok) who brought this tastiness to PDX with “Nong’s Khao Man Gai” food carts. Hers is LEGIT. 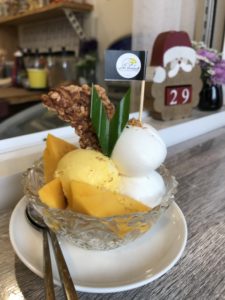 Thai Cookery School has been around for almost 30 years! Pickles came here in 2004 and it hasn’t changed that much, for obvious reasons. They know the local cuisine and hire great instructors.

Our instructor for the full day was Garnet, which Pickles thought was Janet with a G so we refer to her as Ganet now. Dammit Ganet! to be exact. I predict she will have her own cooking show at some point because she was so passionate about cooking. She would show us how to cut chili peppers and then proclaim, “#lifechanging” or “#fabulous”! We think she would have behaved the same enthusiastic way had no students been present. 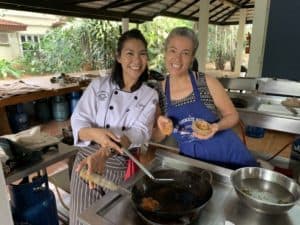 Lesson #2: Don’t cut too small and don’t cook too long 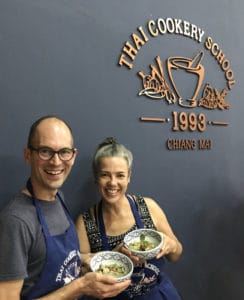 And then we devoured every dish we made. It’s a lot of food for a day, but somehow we found the space.

We spent a day pampering (feeding, walking, bathing) two female elephants (seen on blog’s feature photo); Sa Ard (b. 1958) and Happy (b. 1942). They were both rescued from riding camps in Pattaya and now will forever be respected and free to live in nature. 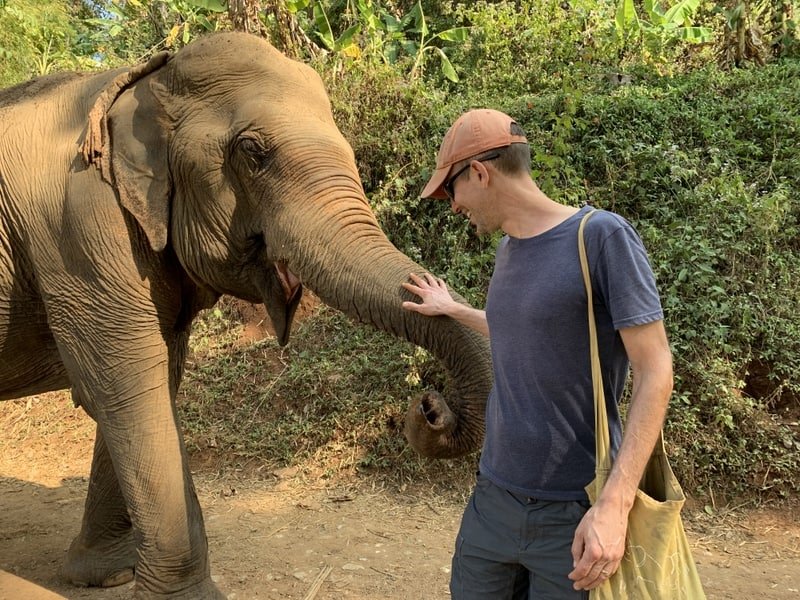 The amount of elephant “sanctuaries”, zoos, riding, and trekking centers is overwhelming. They all have their own brochure advertising; THE BEST! or RIDE-FREE! or CRUELTY-FREE!, etc. Unfortunately, animal welfare is not well regulated by the government so it’s challenging to know which ones are legit. Sadly, many support the entertainment industry and surprisingly, riding is still in vogue with some tourists. Many outfitters also breed to appeal to tourists because tourists think the calves are cute. Don’t fall for those.

The threats against Thai elephants come only from human exploitation.

We landed on the Elephant Nature Park (ENP) and reserved a “Pamper a Pachyderm Full Day Trip” well in advance of our arrival. It’s popular for good reason so book early if you go. It’s an elephant rescue and rehabilitation center where you can volunteer and visit to help. You won’t see many calves here which is clue #1 they aren’t in it for the entertainment. In fact, many of their elephants are old and injured, some completely blind. Their oldest is a female who is 104 years old. They built her a private water hole because her mobility is limited – same with the sight-impaired elephants. ENP also rescues dogs, cats, and buffaloes.

Rescues come from all over Thailand, Myanmar, Cambodia and Laos. They rescue from circuses, trekking camps, riding centers and the logging industry which causes horrid injuries due to logs breaking loose which crush legs and hips. Thailand banned elephant logging in January 1989, but surrounding countries continue. Their natural habitat has since dwindled which means the WILD elephant population is threatened. The balance between wild and domesticated elephants is not healthy. 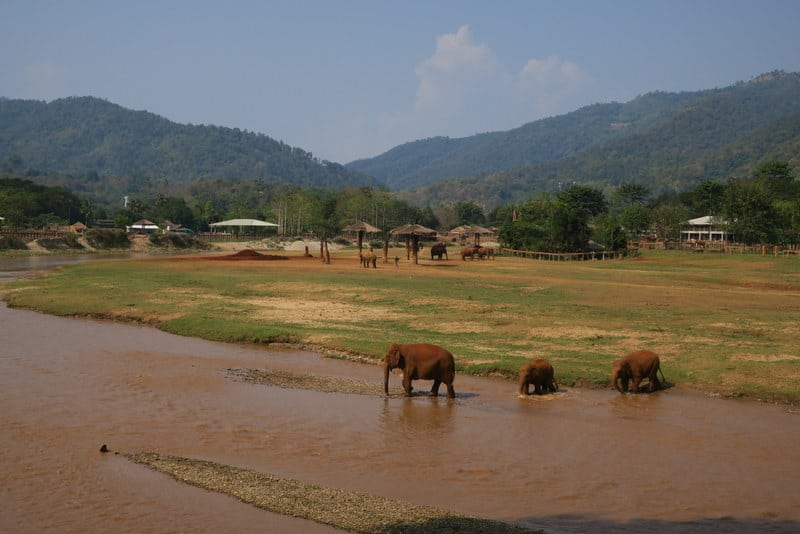 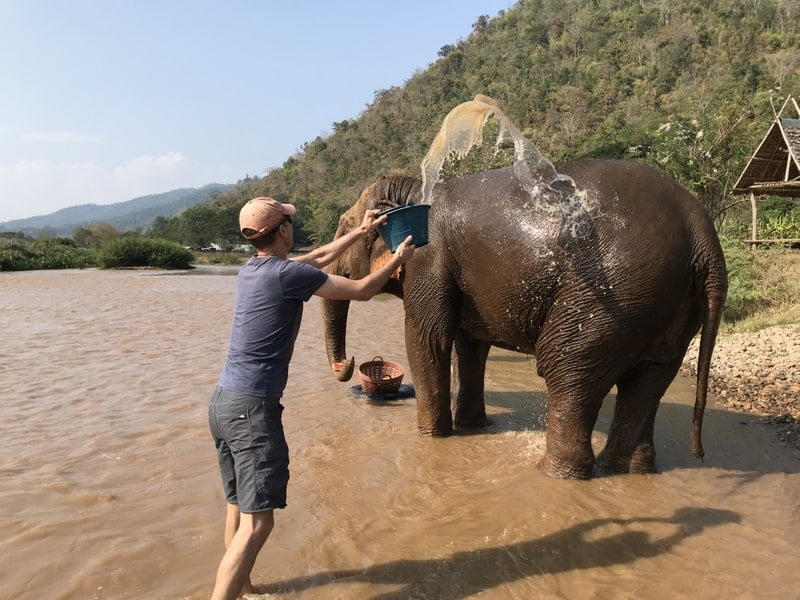 How do they acquire elephants?

Elephant Nature Park typically purchases an endangered or injured elephant, preferably in return for them closing shop (i.e, circus, ride/trek camps, etc). These “exchanges” require time (building relationships) and money. And every elephant requires space to roam so money is also spent on acquiring natural habitat and food (220-440 lbs. of food per elephant, per day).

There are an estimated 3,000-4,000 elephants in Thailand today – half of this number is domesticated, the remainder lives wild in National Parks Reserves. 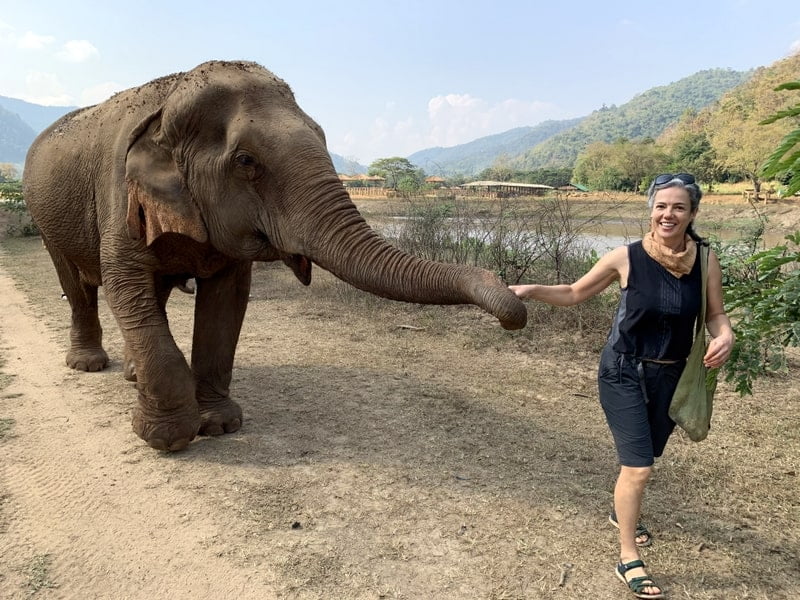 I’ve never been this close to an elephant nor touched or fed one. My eyes welled up immediately because they’re absolutely beautiful and gentle. I was particularly in awe of the female’s two breasts which look strikingly like ours. 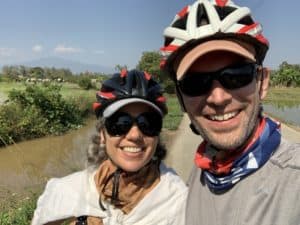 Chiang Mai can be busy and hectic, and we were craving some countryside. Pickles found Grasshoppers Adventures and we signed up for the Chiang Mai countryside day ride, 60k. It was so much fun, quite relaxing and refreshing to get out of the busy city. We would definitely add Thailand to our list of places to bike. Serendipitously we met two young ‘ns who had just finished riding 2,000k around Thailand with luggage the size of my toiletry bag. They both cycle in the UK army and are currently our inspiration for packing light. 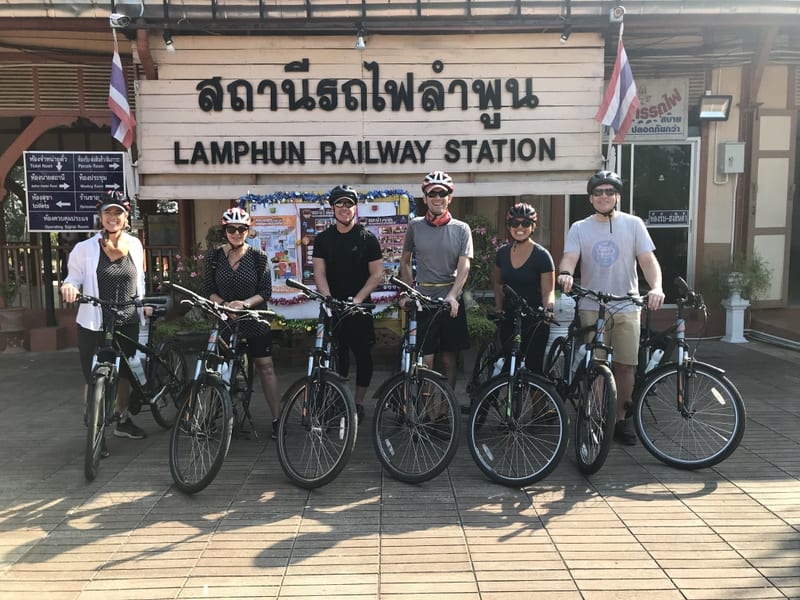 We didn’t even know this was a thing until the day before and it’s really A THING. Along the Ping River, what seems like thousands of people (maybe more?) gather to release lanterns in the sky and watch fireworks. Pros: It’s pretty to watch. Cons: It’s incredibly noisy and all the paper lanterns (with small fuel canisters and circular metal rims) will eventually fall from the sky and become rubbish somewhere on land or in water.

We observed in wonderment, but couldn’t bring ourselves to create more waste. 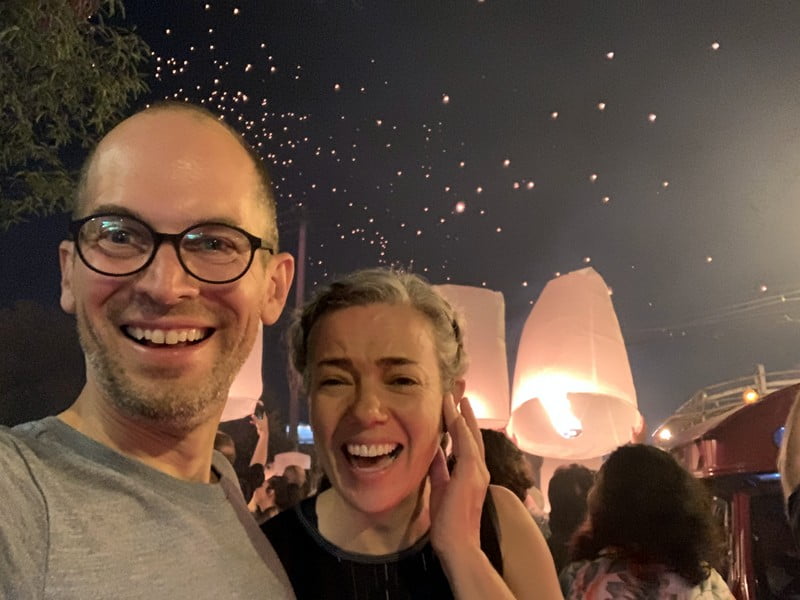 Links to our favorite places:

From Taiwan with love,
Pickles & Passionfruit