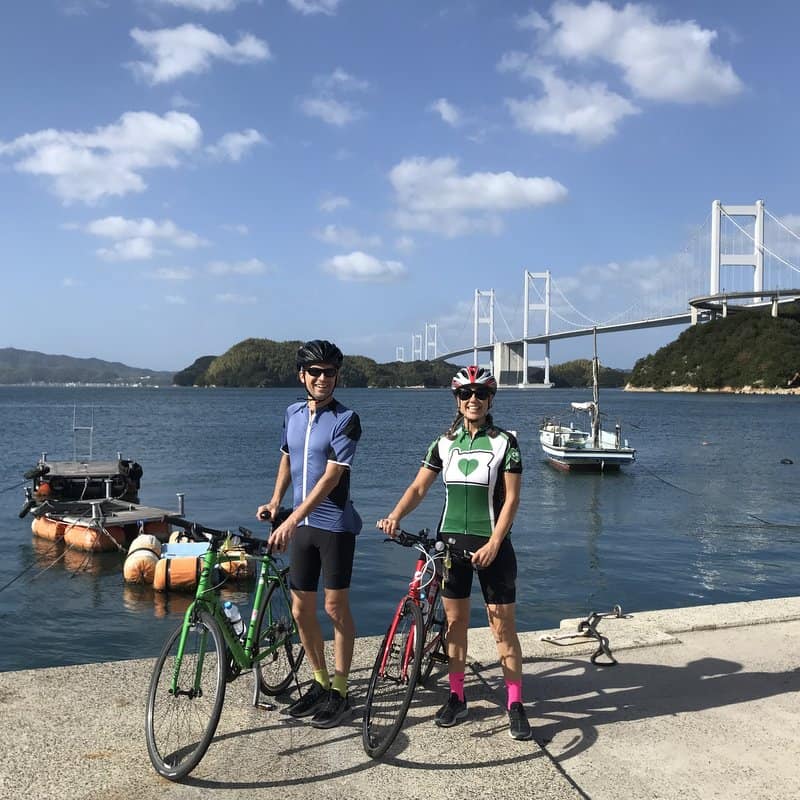 Taiwan’s 10-10 holiday is similar to USA’s fourth of July. Families and friends gather to bbq and set off fireworks. It’s Taiwan’s National Day and Pickles got two days off of work. For us that means a good time to travel.

Inspired by #7 on NYT’s top 50 places to visit in 2019 we went to Japan with a focus on biking Shimanami Kaido (also known as The Nishiseto Expressway) in the Setouchi Region. This bike route ranks in the “Epic Bike Rides of the World” book by Lonely Planet, which sealed the deal for us. 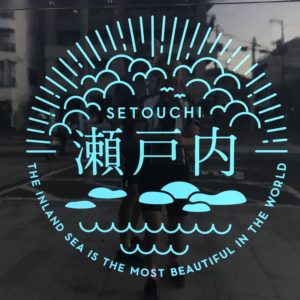 We crafted a clock-wise itinerary that started and ended in Okayama (airport code OKJ). From Okayama we went to Naoshima, an island known for its art museums such as Benesse Art Site. From there we continued to Imabari which was the start for our 85k bike ride ending in Oniomichi, and a final stop in Hiroshima to visit the Peace Memorial Museum.

which is far more than just OKAY… in fact this city won us over BIG and made the list titled, ‘Places we’d happily retire’.

Okayama is like the the Amsterdam of Japan. Even the population is similar at about 721,000 people. Everyone, from babies and parents to slow rolling elders are on bikes! It made for a nice vibe in the city and a strong sense of community as people could get everywhere they needed to be by bike. To us that’s a sign of a well planned city. 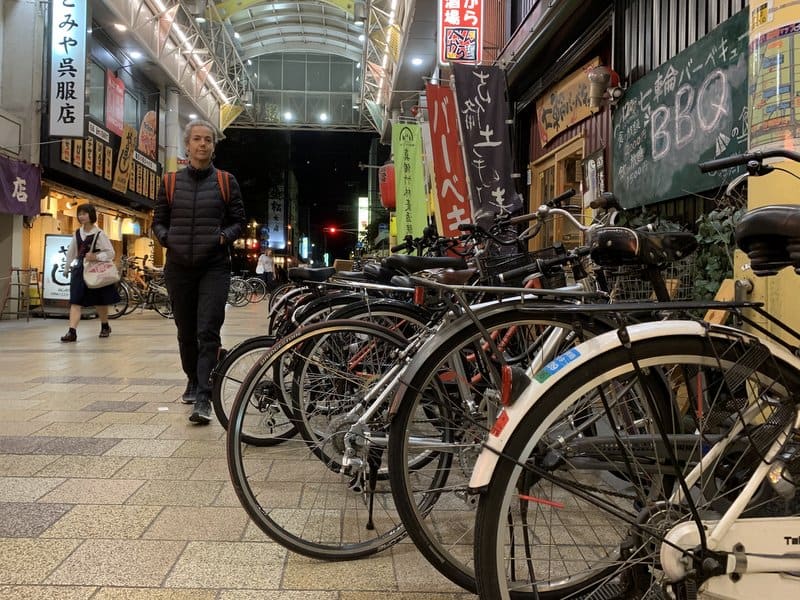 We only booked one night in Okayama thinking it was just a layover type of place to get us to the next place, but we managed to see two very beautiful sights: Okayama Castle and Korakuen Garden. We wanted to stay here longer. 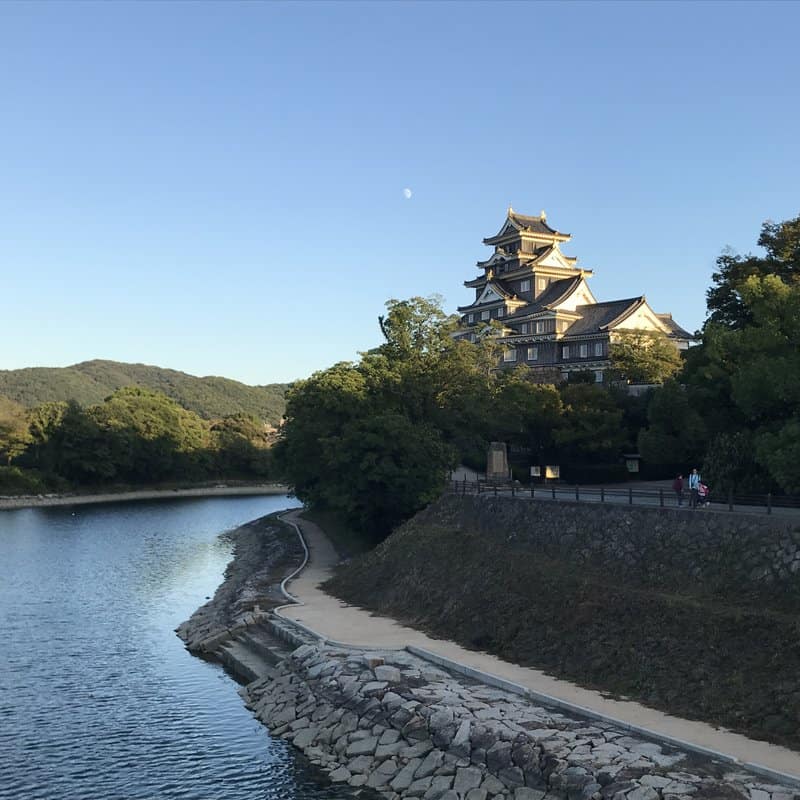 Korakuen Garden is one of the “Three Great Gardens of Japan”, built in 1700 by green thumb Ikeda Tsunamasa, lord of Okayama. His castle (above) overlooks this green masterpiece (below) which sits on the other side of the river. It’s stunning and meticulously maintained. The profession of gardening in Japan is highly respected.

We then took a train to south, to the coast to catch a ferry to…

This is a small Island at 5.5 sq. miles, navigable by bike, that has become a hub of art galleries all thanks to an education and publishing conglomerate based in Okayama named Benesse Holdings. They have the Berlitz language brand and some famous pieces in their art collection by Claude Monet, Frank Stella and Andy Warhol just to name a few. Wanting a special place for all this art, Benesse bought land on this island and hired world-famous architect Tadao Ando to build museums (small and large). 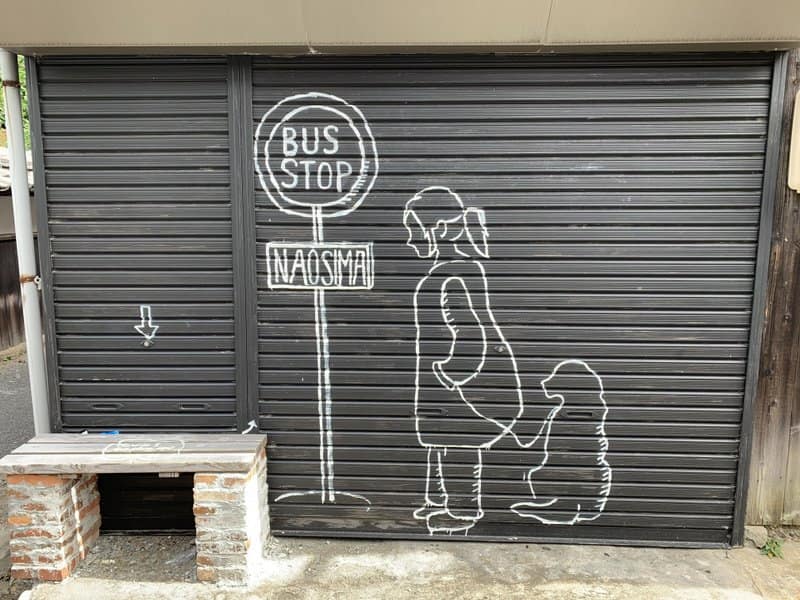 We spent 2 nights, 3 days and only scratched the surface of art viewing. Just glance at the Benesse Art Site website to get a sense of how robust this art scene is. We visited Chichu Art Museum plus many other ‘art houses’, but ChiChu was a highlight. TIP: Reserve/book your ticket and time slot online in advance.

Not only were the art exhibits stimulating, the architecture that houses them are design pieces blending old and new materials with the highest regard to aesthetics. 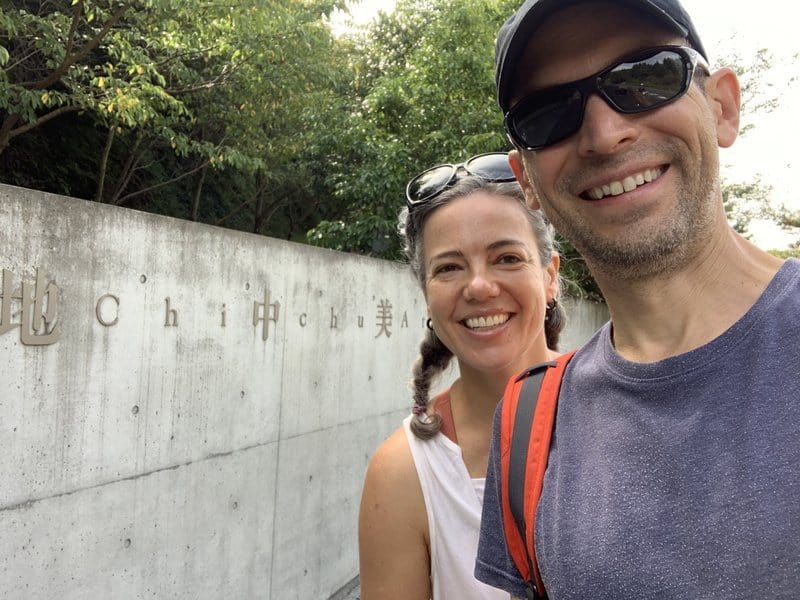 The space designed to house five Monet’s at Chichu is breathtakingly modern, with natural light and may have even been subterranean. I do know we had to wear soft white slippers to enter which made the room blissfully peaceful. These are spaces designed for a human to absorb and think about art – in peace! I’ve worked in and with museums and I have never experienced anything as thoughtful as some of these spaces. It’s safe to assume Benesse spared no expense.

Two artists that wowed us: James Turrell, particularly his ‘Backside of the Moon’ exhibit and Tadao Ando, the architect of many museums and galleries on the island.

All museums are PHONE & PHOTO FREE which makes one present with the present.

The Naoshima Noren Project is a project for hanging colorful doorway curtains (Noren) throughout Naoshima. All of the Noren are created by dyer and weaver Yoko Kano. These were some of our favs seen on homes, businesses and galleries: 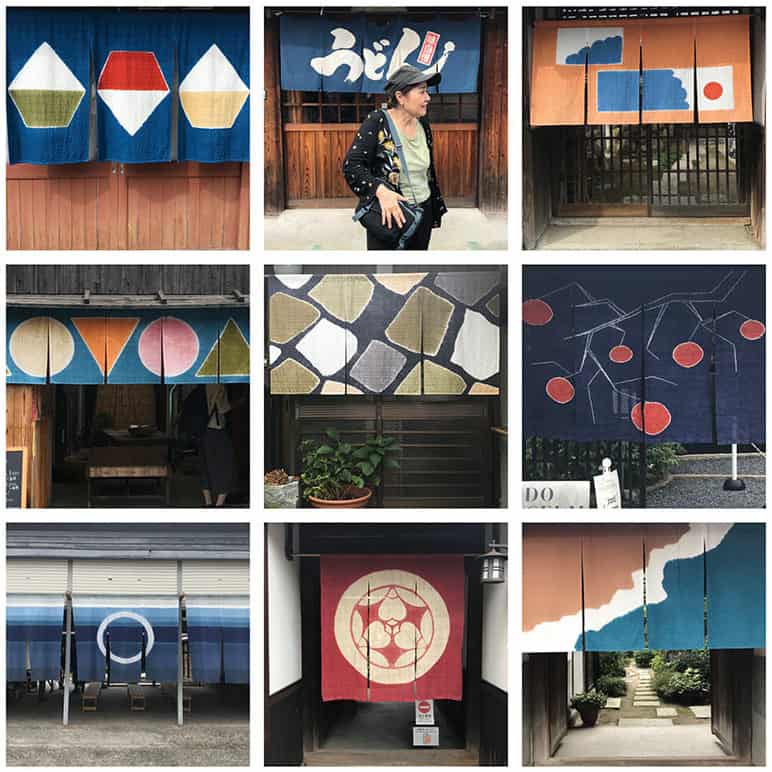 We left Naoshima by ferry, going south to Takamatsu where we caught a train to …

(The southern point of the Shimanami Kaido bike route)

This bike ride is a visual stunner and we think doable for most fitness levels. The route is on the flat side with gentle sloping pathways leading up and down to the bridges. It was DESIGNED with cyclists in mind – they were not an afterthought. Hallelujah!

This is our view from the Sunrise Itoyama Hotel in Imabari which sits under the first bridge. It’s a fantastic starting point for the ride and included an onsite restaurant, gender separated onsens and bike rentals! That checked all the boxes for us.

We rented average cross bikes for a one way ride. We would have preferred road bikes, but we didn’t plan far enough in advance. We felt lucky to get anything really. We wore regular sneakers (not clip-ins) and spandex for undercarriage comfort. We did this ride in one day, but you could stretch it out to many more and stay at ryokans along the way. TIP: If you’re picky about your bike (or really tall), reserve at least 3 months in advance. It’s not touristy, just quite popular among the Japanese.

To ride light, we had our backpacks sent to the end hotel via Yamato Transport (Japan’s #1 courier) for about $30 USD. This is very common and trusted in Japan and Taiwan. Hotels will manage it for you. 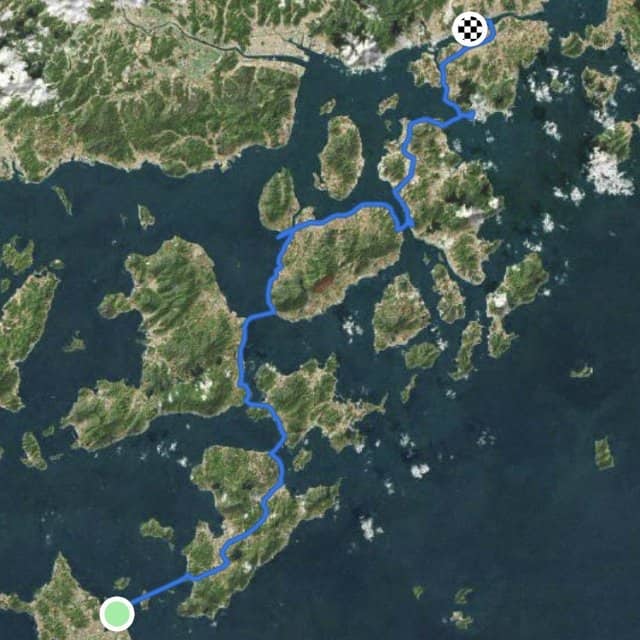 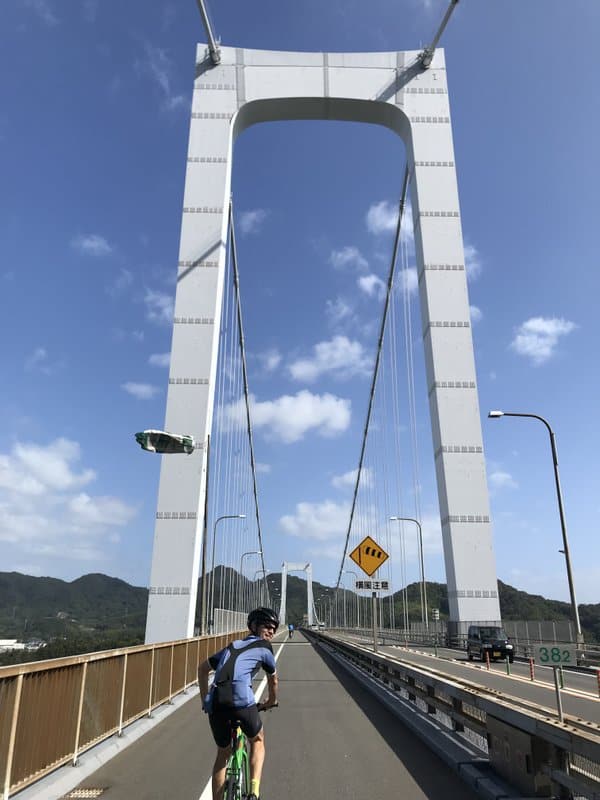 Almost 3,000 islands are located in the Seto Inland Sea! Many of the smaller islands are uninhabited. 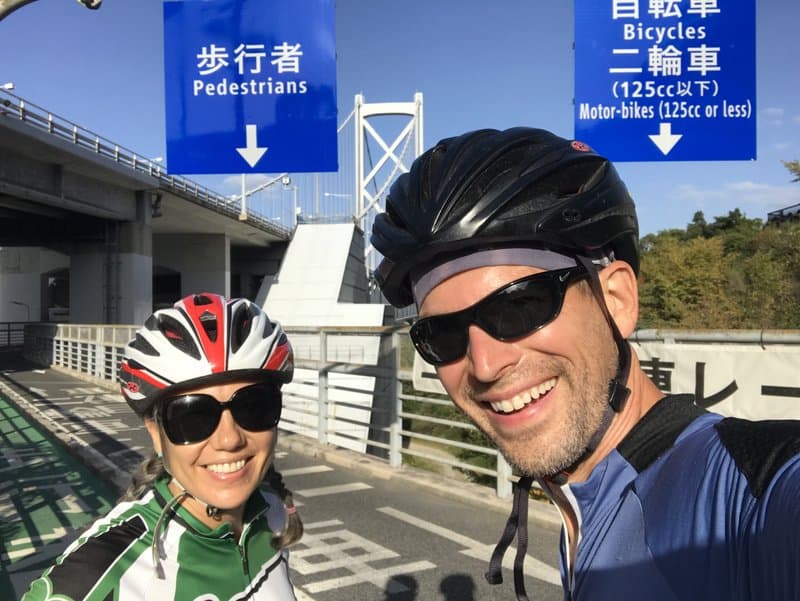 We loved the separated path for pedestrians and cyclists and the ENTIRE ROUTE has a BLUE PAINTED line so no need to refer to a map, ever. Japan is buttoned up! This made for one of the most relaxing bike rides we’ve ever done. 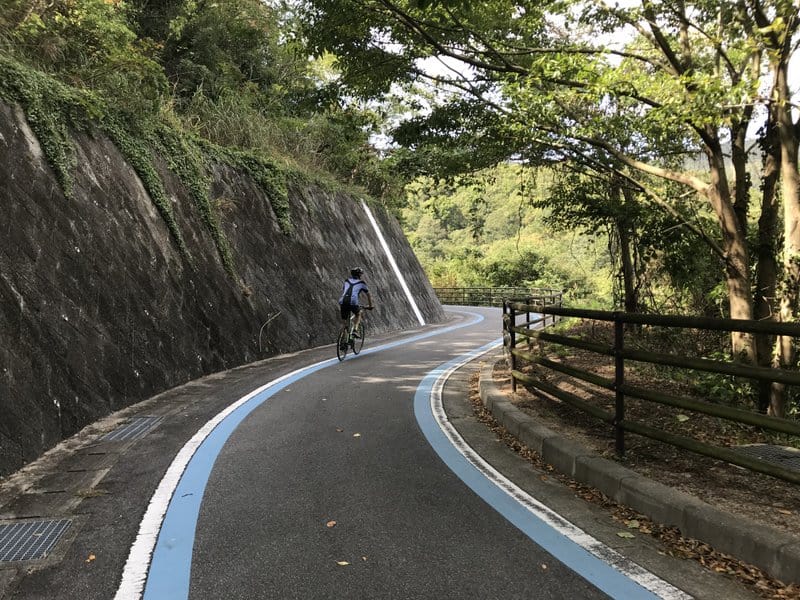 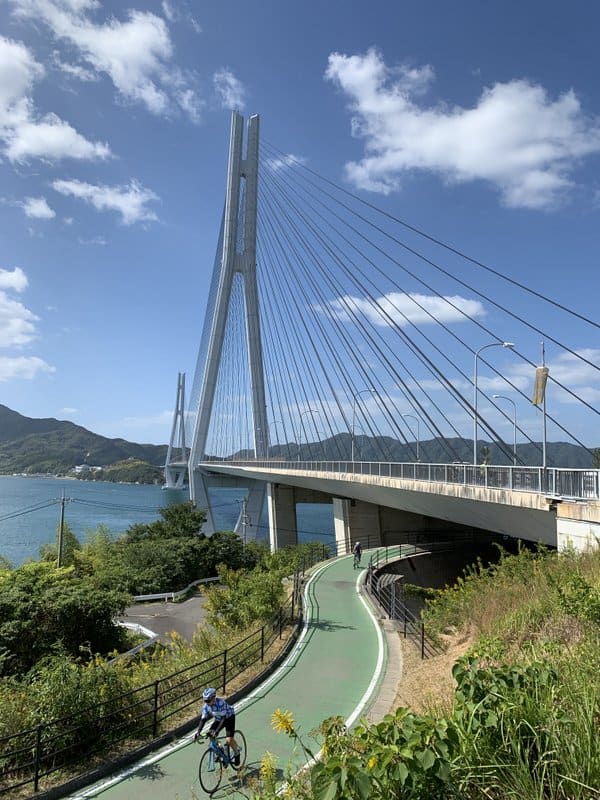 The French Mediterranean has competition! Japan grows lemon and olives trees? We had no idea. All the small towns we passed through had their local delicacy such as lemon ramen at さよ (translates to ‘goodbye’) restaurant and it was delicious! 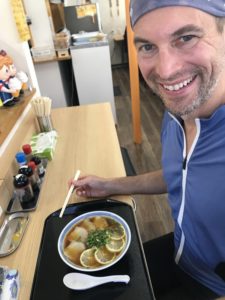 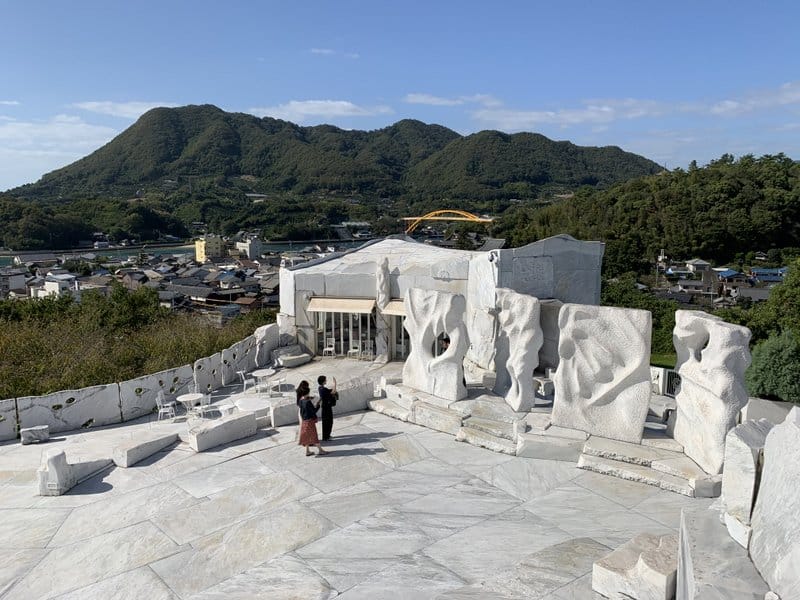 ONWARD TO OUR FINAL DESTINATION… 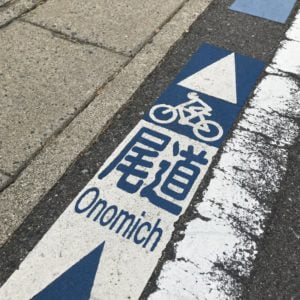 We came to Hiroshima to visit the Hiroshima Peace Memorial Museum. It’s a sobering memorial and an important part of history. The museum is filled with artifacts and stories of those that survived which offers an empathetic education to those not familiar with the use of nuclear weapons. Not too many dry eyes in this museum.

We’ve seen folded cranes all over Japan and now we know the story’s origin. It’s from a young girl named Sadako Sasaki who was only two years old when Hiroshima was bombed. She lived, but was doused in black rain. She lived to be 12 years old but suffered greatly. While sick, she attempted to fold 1,000 origami cranes. She folded 644 before she died and it’s said that her friends completed the 1,000 and buried them all with her. There are thousands of paper cranes folded by visitors at this memorial.

Considering what happened only 74 years ago, it’s hard to fathom that a city could recover to be so vibrant, beautiful and kind … and delicious. We hunted down Hiroshima’s famous Okonomiyaki (a savory pancake), a thin layer of batter and a generous amount of cabbage on top of yakisoba noodles. Okonomi means “how you like” or “what you like”, and yaki means “cooked”. 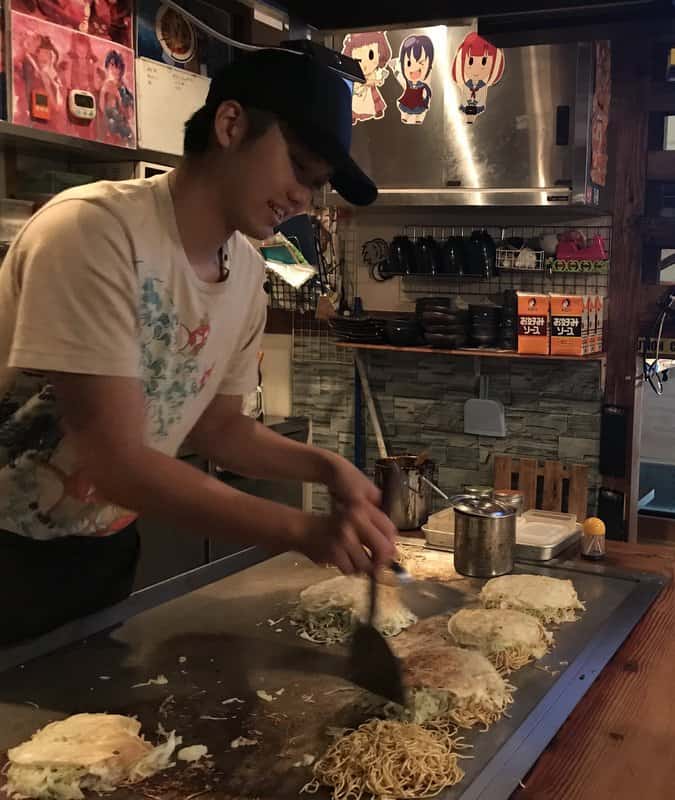 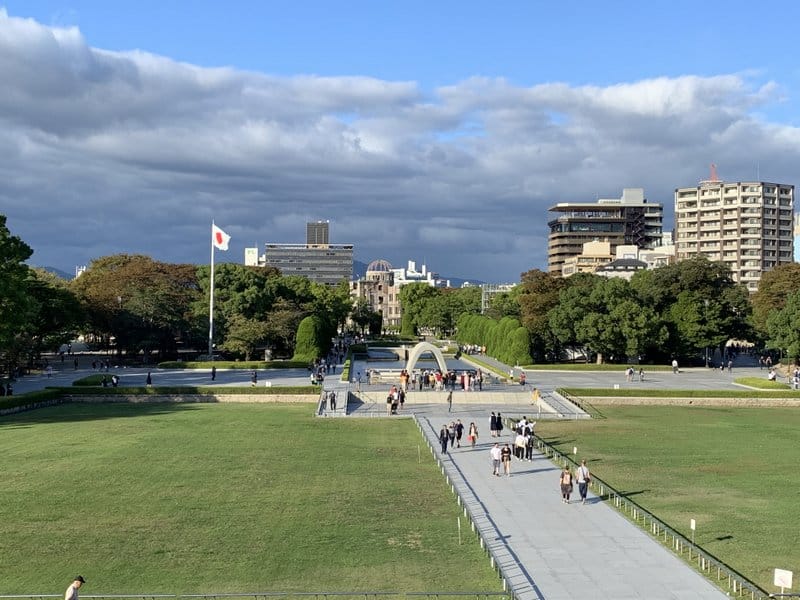 We leave you with the inscription from the cenotaph (arch shown above center):

This memorial expresses the spirit of Hiroshima – enduring grief, transcending hatred, pursuing harmony and prosperity for all, and yearning for genuine, lasting world peace.