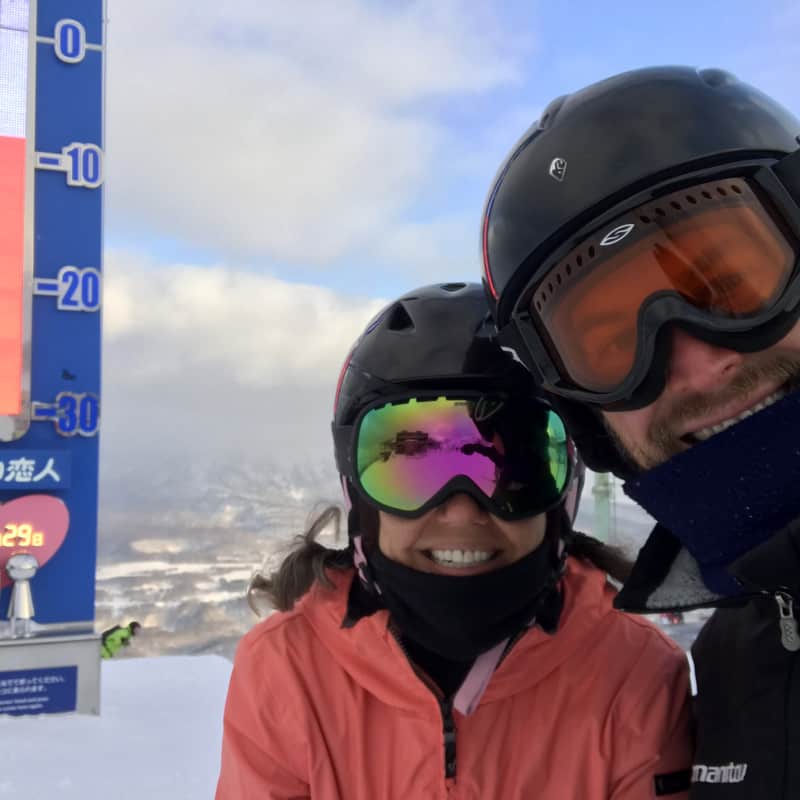 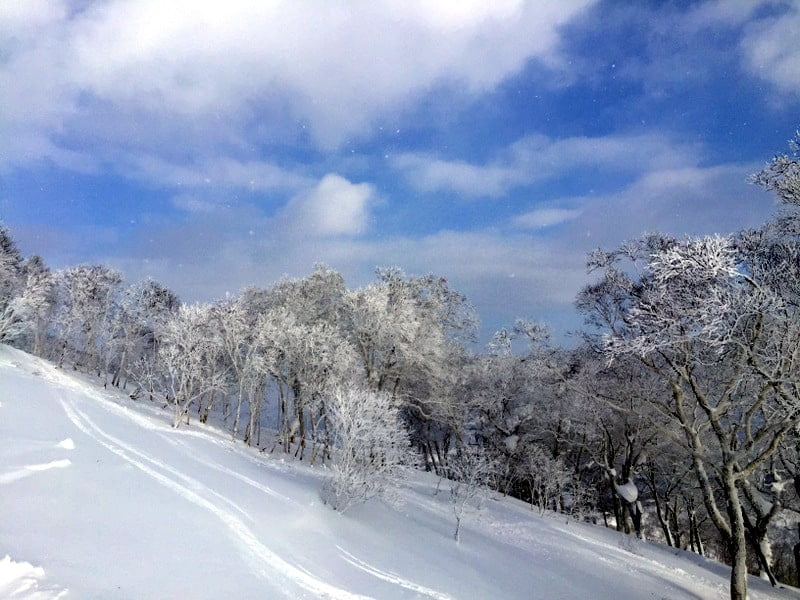 Another adventure checked off the bucket list. After 3 years of NOT snowboarding we were desperate to find out if we still could. The place to go around here is Niseko on Japan’s most northern island and it did not disappoint. The snow is dry. It’s fluffy. It’s consistently falling. It’s 100% primo… sort of like Roundtop in Pennsylvania where I cut my first tracks. Ha. Just kidding. 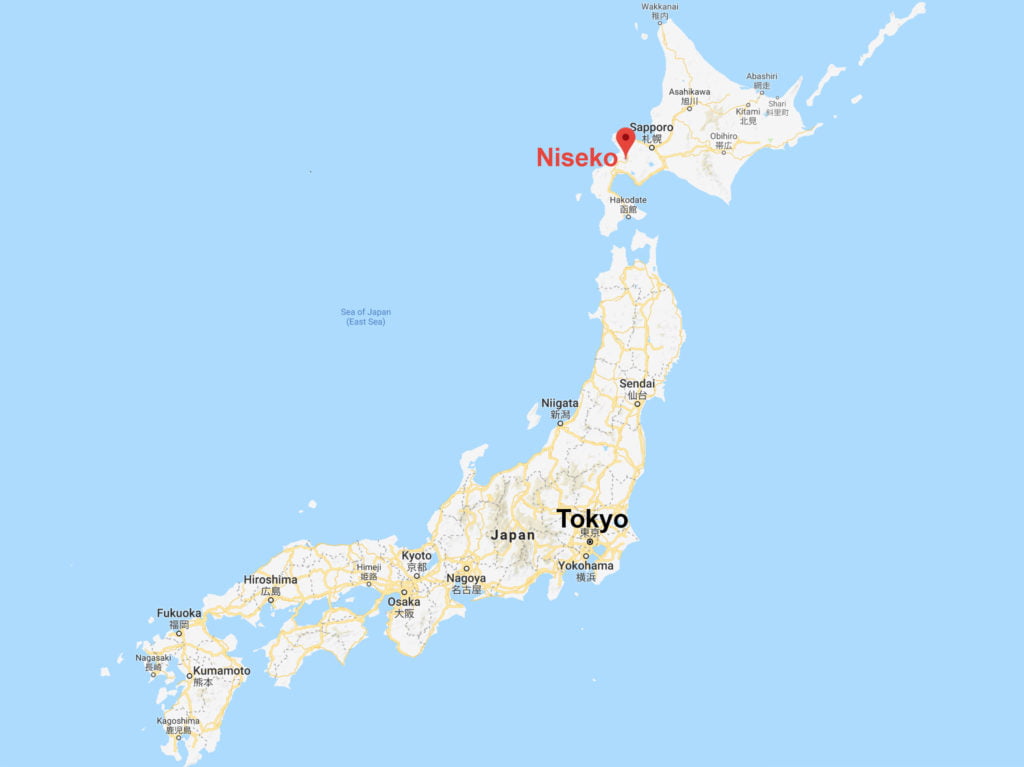 A couple things that wowed us about Niseko aside from the snow conditions. For starters the mountain is massive as it’s comprised of 6 different ski areas. A car rental is not necessary (and why would you ever want to drive in this much snow is beyond me). The town and most every hotel has a shuttle bus that runs between all the mountains (and your ski pass works as a bus pass). Our hotel’s shuttle was so prompt that if you were 30 seconds late, it was gone. I appreciate how accurate and dependable things are in Japan. Lastly, one does not need to lug any gear because renting high quality gear (even snowsuits) is easy and affordable at about $30/day and it’s delivered straight to your hotel. Japan. So organized. So accommodating.

Depending on how you like to travel this could be a perk or a bummer, but there are no language barriers in Niseko. It’s a very international town – every young Australian from the Southern Hemisphere seemed to be on their summer break working in the restaurants. Niseko is worldly and it was refreshing to hear other languages aside from Mandarin, but culturally speaking it’s not a rich Japanese experience. You come for the pow-pow, baby. 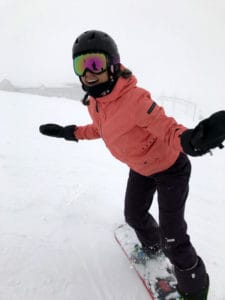 Sorry, mo onsen pics as they’re never allowed and that would be creepy as everyone is naked. Niseko has lots of public onsens (hot spring baths). In fact, many hotels have their own (ours did not), but most hotels are open theirs to the public for a nominal fee. One day we shredded down the mountain as cold as popsicles, hopped on a bus straight to the Niseko Grand Hotel Onsen, the only co-ed onsen in town (yep, there were johnsons in this onsen), paid about $10 usd each, plopped our gear in their foyer and soaked outside under snowfall. The other onsen we frequented was within walking distance to our hotel and near Bar Gyu (with tiny door), Yukoro Onsen. It’s a gender separated one, which is standard, but this onsen allowed one to take a can of beer in while you soak. And that’s how you wrap-up a day on the mountain! 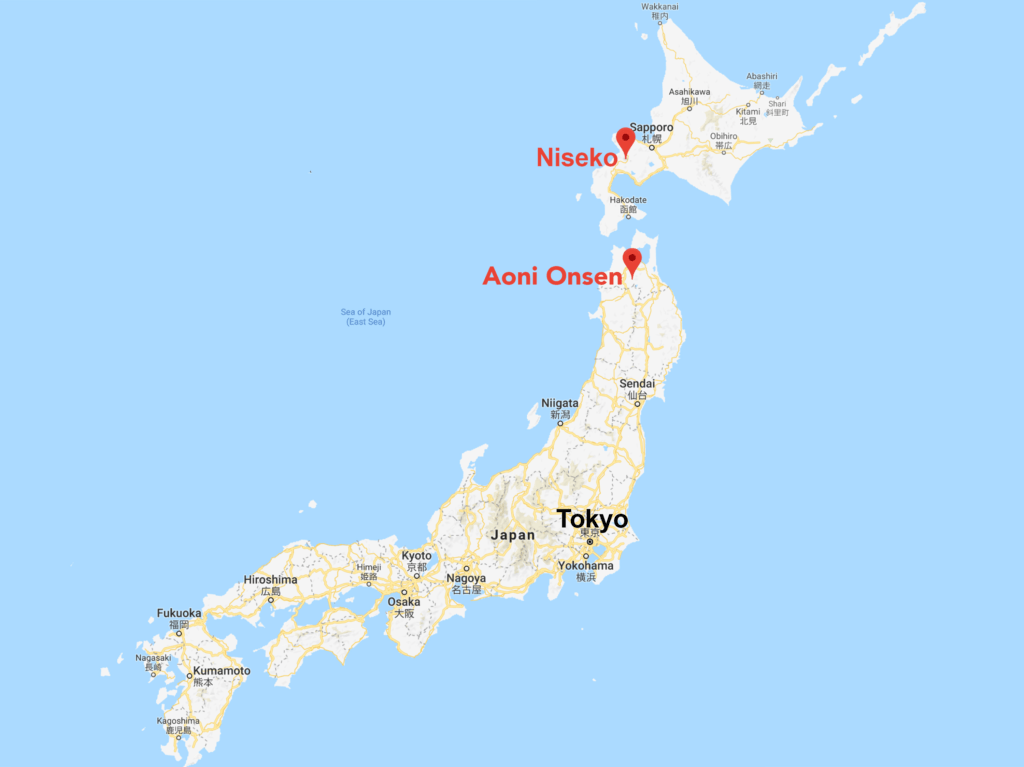 Deep connection to all things lunar

While most people in the western world celebrate a solar calendar new year on Jan. 1, we over here in the eastern world celebrate the lunar new year. This year the new year started on February 5. The date changes year to year because it starts on the first new moon of the lunar calendar, and ends during the first full moon 15 days later. Most people have off the entire week and many businesses and factories are closed for at least the week, if not longer. It’s a time when people return home and spend quality time with their families. It’s like Christmas but with daily fireworks and zero commercialism or American football. It’s awesome. 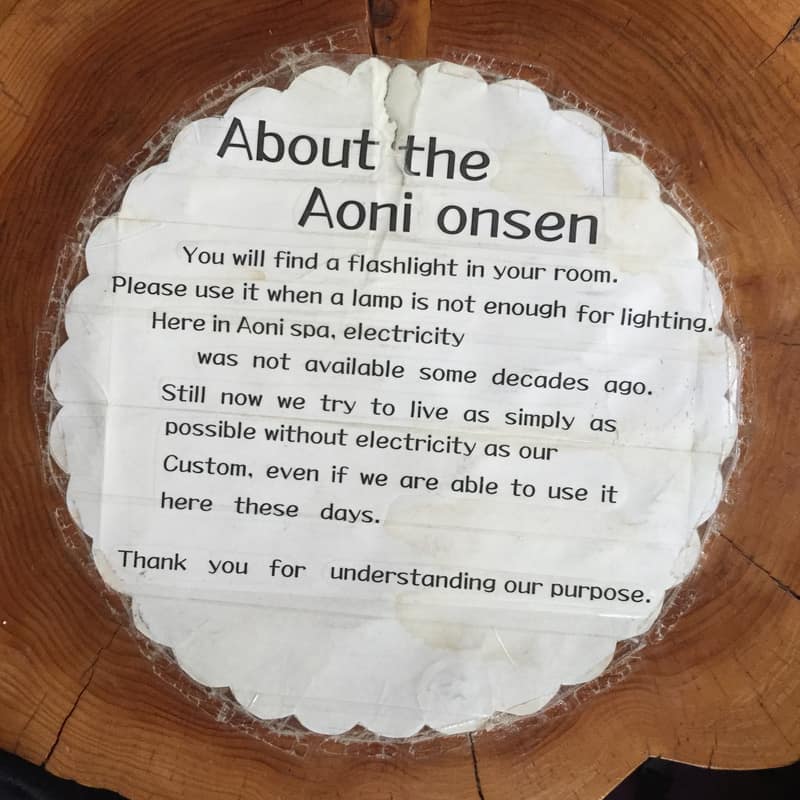 Since we just saw the closest family we have over here in New Zealand, we decided to make the most of this Japan trip and get off the beaten path. I found a ryokan (a traditional tatami-mat room with communal hot spring baths) in Northern Honshu, Japan’s largest island, just south of where we were snowboarding. It required some work to get to and one canceled flight due to wind but we made it. It was really off the beaten path and very little English spoken in these parts which is exciting, in a challenging way. We didn’t think it was possible, but we found more snow at the deeply nestled-in-the woods Lamp No Yado / Aoni Onsen.

One rarely feels small in Asia 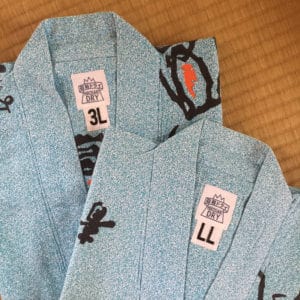 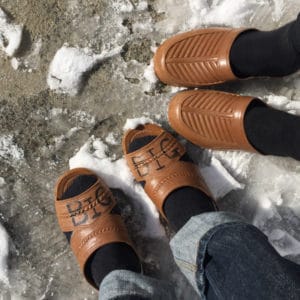 This place was intriguing because it was founded in 1929 and they still don’t depend entirely on electricity, but kerosene lamps (200 are on hand) and stoves. It was also remote as in the road to get there was 7 kilometers and closed to all traffic (except them) due to the snow. In all honesty they had some parts wired but only during portions of the day. At night we used kerosene lamps for light and a kerosene stove for heat. It was cozy. I know, you snowed in souls in the USA must think we’re nuts, but listen… we live in a year-round tropical climate now. SNOW IS NOW EXOTIC. 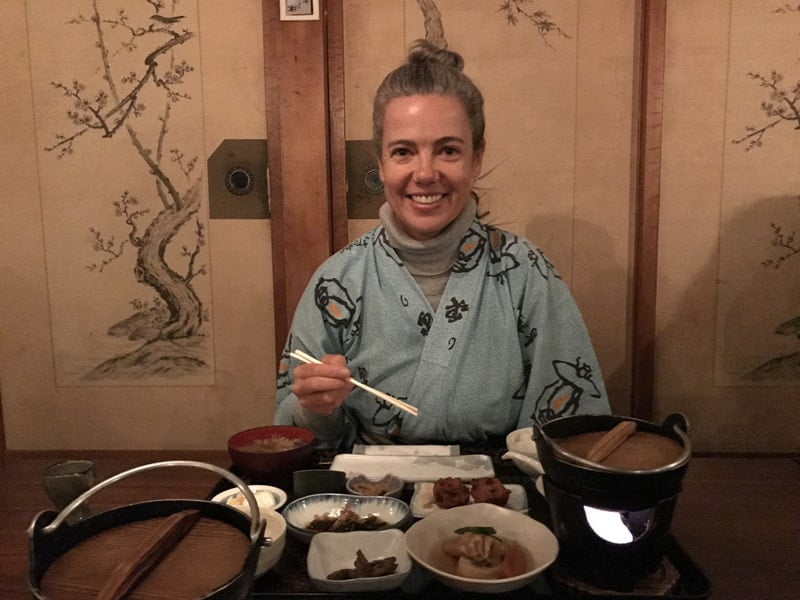 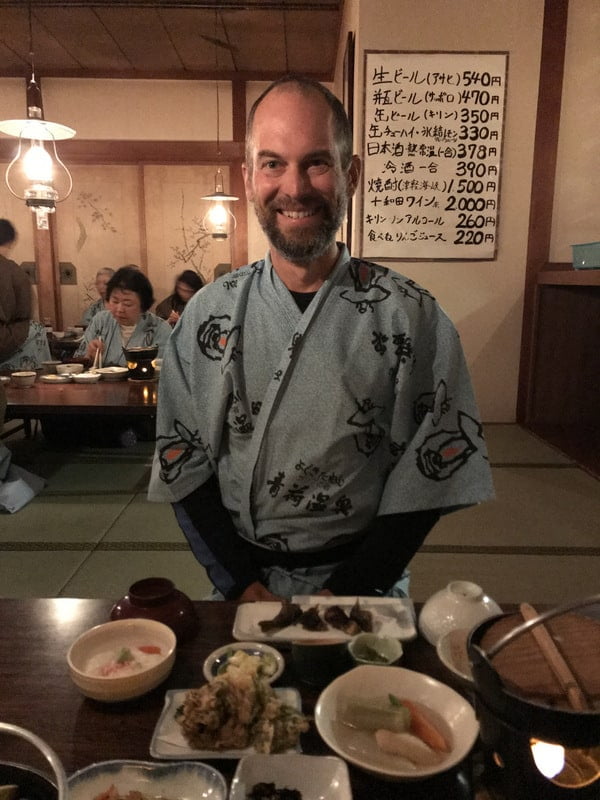 The property has 4 beautiful onsens, some inside, some outside. 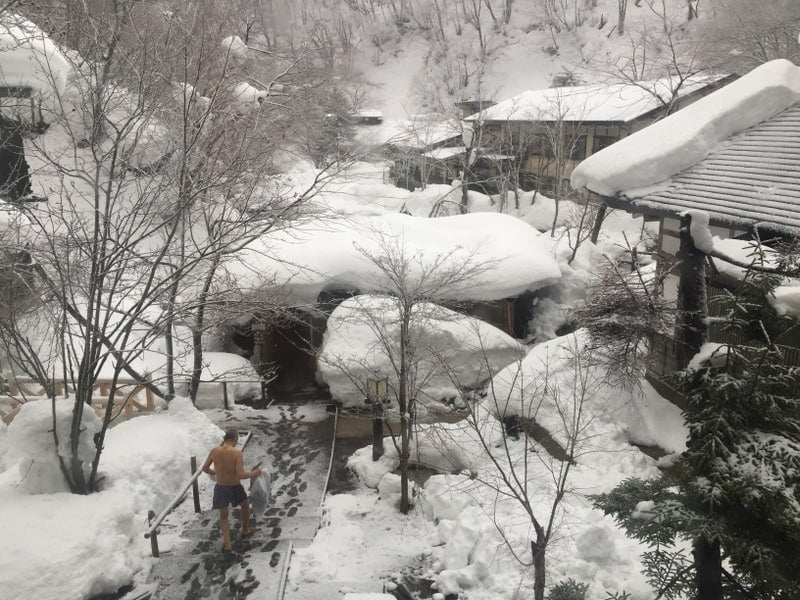 Young women beautifully singing together as they soak in one of the onsens. I think this video captures the essence of this place.

I never thought it was possible, but after 3 full days we hit our limit on onsen soaking and eating fish for every meal. We were desperate to stretch our legs, to hike or walk in the woods, but the snow was so freak ‘n deep you couldn’t go off road. The only place to hike was along the 7 k road (driveway). 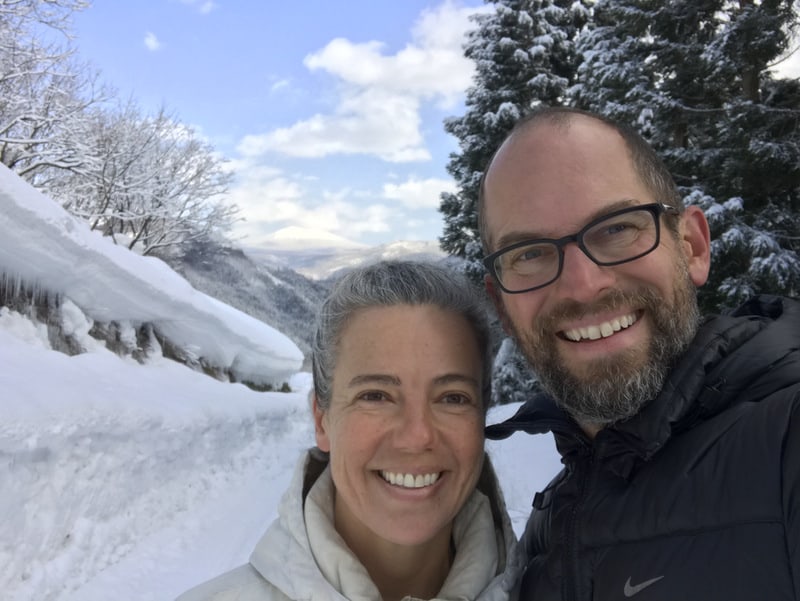 Happy belated lunar new year. We miss and love all of you fine friends and family.

Want to get an email when we post to the P&P Blog? Sign up below. We post roughly once a month. No spam ever and you can unsubscribe at any time by sending us a message tied to a frisky Pembroke Welsh Corgi.