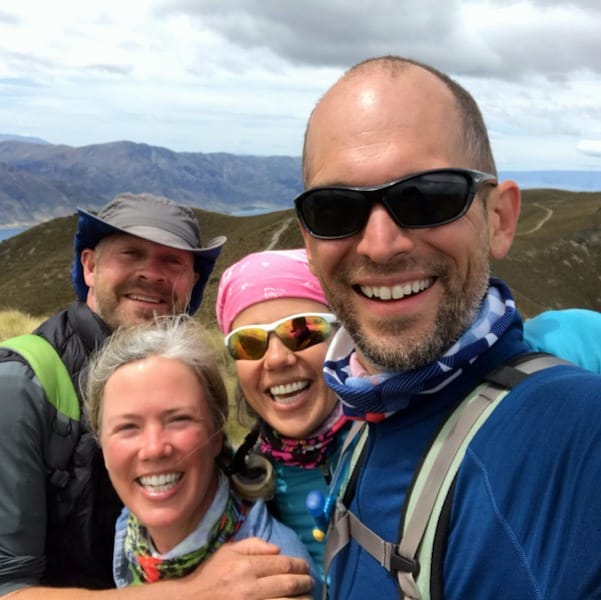 Second time around. This time with more van!

Scott… what a guy. Of all the ways he could have spent his 10 year sabbatical at Nike he invited me, my sister, Tatiana, and her husband, Joe to join (they have long teaching breaks about this time). Luckily Heckles Creative’s sabbatical aligned perfectly with his and I accepted the invite. The only stipulation was that Tatiana and Joe rent their own camper van. Fair enough. We get along, but let’s face it, even family needs some elbow room. Why New Zealand again? Well, it still remains perfect if you love nature, national parks, hiking, fresh air, unpolluted night skies, unpolluted waters, wildlife, solitude and living in a van down by rivers, oceans and lakes – all of our favorite things! It’s magical. It’s also perfect for those who like to travel on the fly without a lot of planning because all you need to do is: #1. rent a camper van. #2. show up. #3. decide which direction to drive. #4. step on the gas and go! Easy breezy. That sums up the next 33 days.

And now from Mr. Sabbatical, Pickles, himself…

We opted to start driving south because on our last visit we ran out of time to do this area justice.  We stopped in some of the towns along the East Coast that we love, but we all wanted to get out of the towns and off the beaten path asap.

Curio Bay is one of the “Must-do’s” of the south island that we didn’t have time for it on our last trip.  Fair enough – we didn’t make that mistake again.  Curious what we rented to get around?  These are 20 year old Toyota HiAce vans, certified self-contained meaning we could go anywhere and be self-sufficient for at least 3 days: we carried all our own fresh water, contained all gray water, LPG gas for cooking, and a porta toilet (goal: leave NO trace anywhere).  This certification permits camping in the wild (a.k.a. freedom camping) which we love.

We had some favorite hikes that we wanted to do again and share with Joe and Tati.  First was the alpine lakes hike from the divide.

On our last visit to NZ, we drove out to Milford Sound in the rain only to find out that no camping spots were available and had to turn around.  After that, we were wise enough to book camp sites in advance and spend a day touring the Sound.

We made our way thorough Queenstown for a nice meal, but it didn’t take long before we craved some freedom camping in the wild.

There is nothing like seeing the bright blue glacial water of Lake Pukaki and Mt. Cook. On a clear day it is breathtaking. On average Mt. Cook is covered in clouds 2 out of 3 days.  Lucky us.

Wanaka, somehow we blew through this town on our last visit.  Foolish!  Wanaka is great!  Good food, good beer all is a small city on the side of lake Wanaka.

Since we had seen the Fox and Franz Josefs glaciers, we opted to explore the Rob Roy Glacier in Mount Aspiring Park through the Wanaka entrance.

On our drive up north we picked up a couple of hitchhikers who were coming off the Heaphy Track.  These two women were on the year long work visa for people under 30 – and we are still upset that we didn’t know about that when we were younger.  They made us want to pull out our backpacks and tent and do an overnight hike.  They told us how we could do the middle section if we take a water taxis in and out – so that’s exactly what we did.  It was super easy to plan the water taxis and book a campsite at one of the i-site centers (information centers) which are ALL over NZ and make traveling on the fly easy breezy.

Coming off of the Abel Tasman Track a Kayak guide recommended the Pelourus Bridge DOC campsite.  It is one of the nicest DOC sites on the South Island and apparently another LOTR film site.  We checked in and the host asked, “Do you like Glowworms?”.  Um, Hell Yea! He proceeded to tell us about the short 15 minute hike to a waterfall where we could find them at night.

We almost stayed a couple of days at this campsite as we couldn’t image what could be more magical than a glowing forest, but we continued on to the Queen Charlotte Sound on the North-East corner of the South Island.  We stayed at a Campsite called Mistletoe Bay in the Te Mahia region.  While it is a family friendly campground, it felt like a playground for adults with hiking, swimming, kayaking and stand up paddle boarding.

As the sun set some other camper asked “Have you seen the glowing ocean at night?” We didn’t know what to expect, but we certainly needed to check it out.

On November 14, 2016 there was a magnitude 7.8 earthquake that completely destroyed sections of roads to Kaikoura and made it difficult to get to when we visited in January of 2017. Now the roads are (almost) repaired and rebuilt making travel here much easier.  Kaikoura is known for its wildlife: sea lions, albatros, dolphins, and whales.

We met a traveler that told us that she had a life changing experience swimming with dolphins.  We didn’t know that was even a possibility, but with testimony like that how could we pass that up? At the local i-site, we were able to secure a swimming with Dolphin tour but only the 5:30 am tour was available.  Being on vacation, setting an alarm kind of goes against our principals, but for SWIMMING WITH DOLPHINS… worth it! I don’t know my dolphins very well, but we were told that the Dusky Dolphins of the area are some of the most friendly, curious, and acrobatic of all the dolphins in the world.  To get their attention it was suggested that we make squeaky noises, swim in circles and look them in the eye.  Just act like a dolphin.  It sounds a bit like a joke to see what you can make tourists do, but once you see the dolphins going to the loudest squeaker – suddenly everyone in the water is squeaking up a storm.  Sarah made more of a guinea pig noise which she claims was very successful.

Only one company is permitted by the Dept. of Conservation to interact with these dolphins.  NZ takes great pride and care in protecting its natural wildlife.

We think the compact Dusky Dolphins are the Corgis of the Sea. I think you’ll see why.

In was an amazing month in New Zealand, and these were just some highlights of our trip. There were many smaller adventures along the way and most of those came from the excellent guide book NZ Frenzy, by Scott Cook.  It has been our go-to guide for both of our trips. Highly recommended for travelers going to the island!

If there is one thing we learned it’s that there is no such thing as too much time on this island.  We can’t wait until the next visit!

Want to subscribe to our P&P diary? Sign up below. We post roughly once a month (or twice if we’re catching up). No spam ever and you can unsubscribe if you send us a video of you squeaking like a Dusky dolphin.