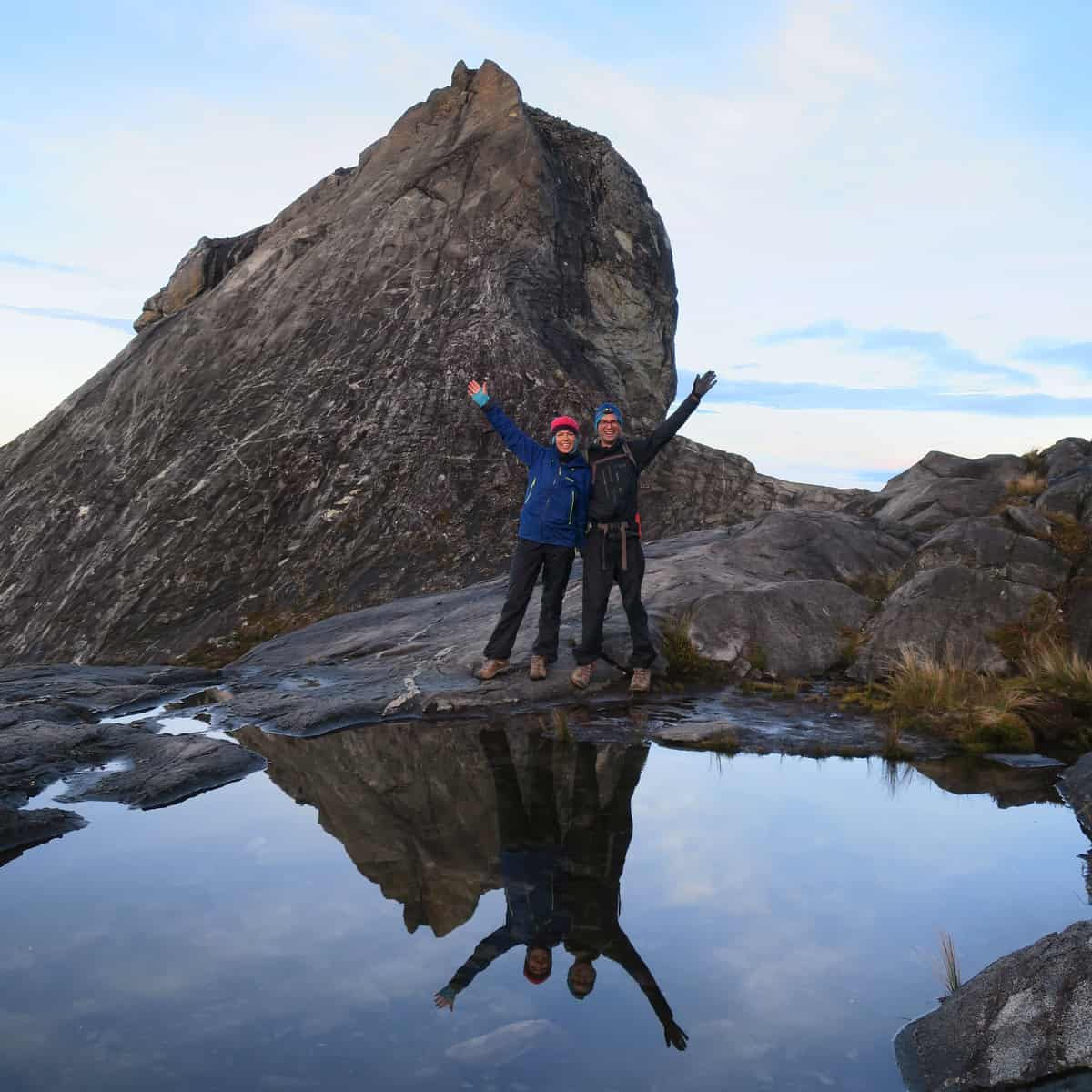 After our summit of Jade Mountain in Taiwan (NE Asia’s highest peak) we got summit-curious and wondered what the highest peak in SE Asia is. Turns out it’s Mount Kinabalu at 4,095 meters (13,435 ft) in Kinabalu National Park. We love spending our free time in National Parks so we said, “let’s go”!

Mt. Kinabalu is on the island of Borneo. It’s in the Malaysian state of Sabah. We learned that it’s renown for sealife and diving. Since we’re PADI certified that was a no-brainer to add on. To round off the experience we spent some time in the jungle to see wildlife. 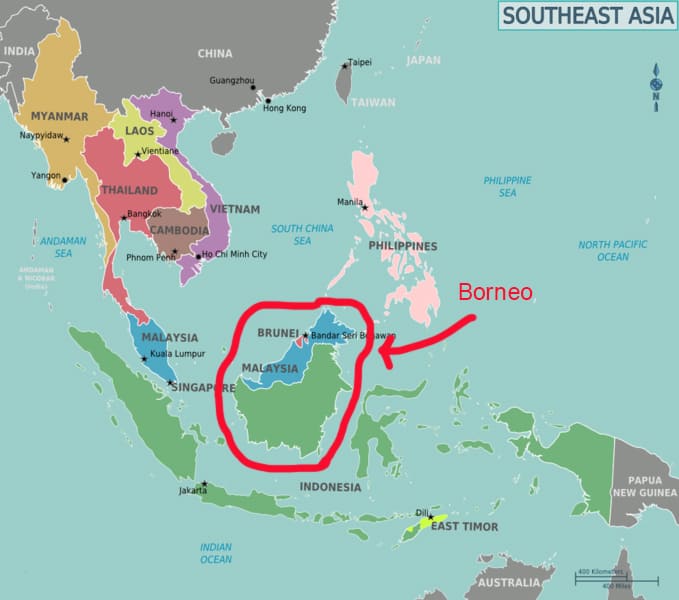 Only 130 hiking permits are allowed per day (due to space at basecamp) and the National Park mandates all climbers hire an accredited guide. To kill two birds with one stone we booked though Amazing Borneo Tours which furnished us a permit and a guide in one easy click. Thanks for the tip, Jenny M! Unlike Jade Mtn, this is a 2-day hike with a steeper incline. We also started at a lower elevation of 1,800 meters. We met our guide, Johan and started hiking at 7:00 am in hot, but rain-free weather. After 6k we made it to basecamp at 11:30 am. The climbing was steep and slow going as there are few switchbacks. 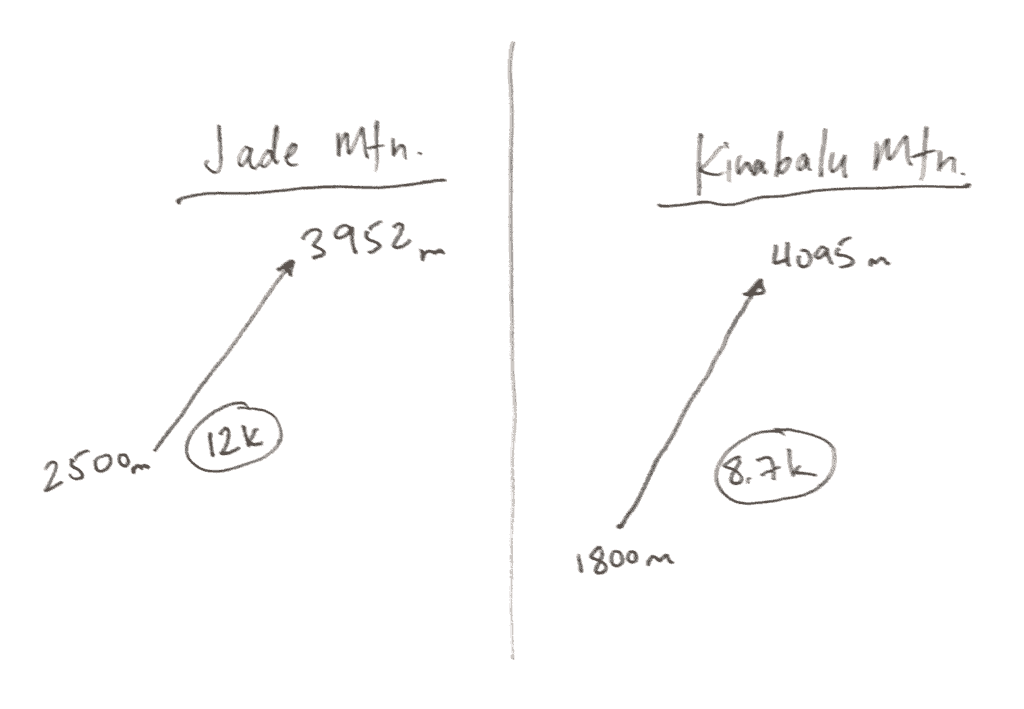 The lodge feeds everyone an impressively diverse and hearty buffet. You take only what you can eat. No wasting food here. Then it’s time for bed. We shared a double bunk room with a young solo-traveling woman from Ontario and a solo-traveling man from Switzerland. Really nice people and they didn’t snore! 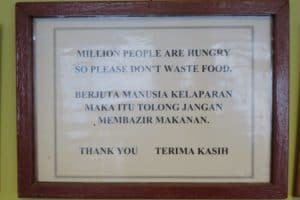 The highest mountain between the Himalayas and New Guinea. It took about 3 hours to hike this last 2.7 k. Here we are at 4,095 meters ready for a 6 am sunrise – anxious to see what we hiked up!

As the sun rose, we sat in awe of the mountain’s massiveness. To us, the terrain was otherworldly. Neither of us have seen anything like these rock formations. After taking in the sunrise we started to get cold and needed to start moving so we began our descent.

Geologically, Kinabalu Park is a granite intrusion formed 15 million years ago and thrust upward one million years ago by tectonic movements and shaped by forces that continue to define its landscape. Despite its geological youth it is exceptionally high in species with living relics of natural vegetation remaining, over 93% of the Park area. {credit: Unesco}

Going down we got to see what we hiked up in the darkness. It was a little nervy hiking on wet granite at this pitch. Thankfully no one slipped and cracked their head so we consider that a win. 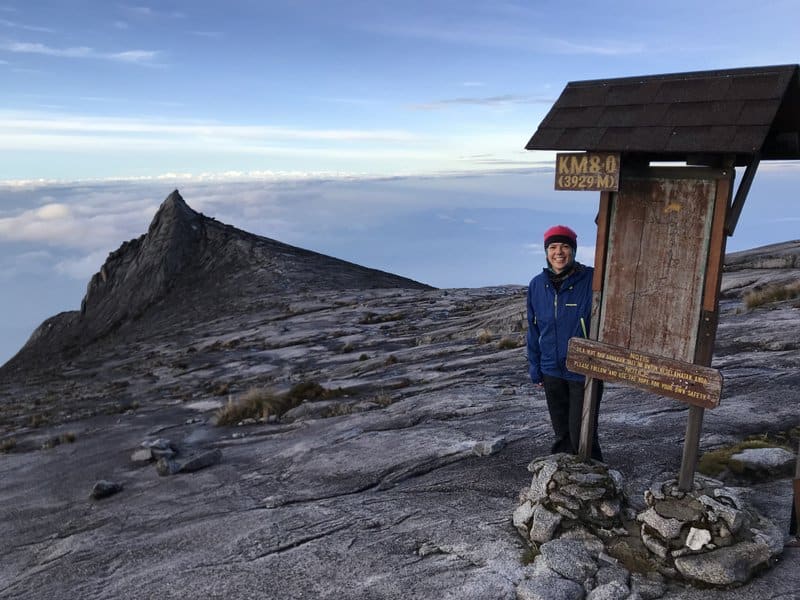 FACT: Nothing is truly water-proof in these rains and going down is far harder on the body than going up. This entire hike is loaded with steps so every step down became more and more painful on the knees. A hiking stick is highly recommended! We were constantly passed by sprinting porters who seemed magically slip-resistant in the pouring rain. Turns our they all wear these shoes made from an actual rubber tree which put our fancy Keens to shame. 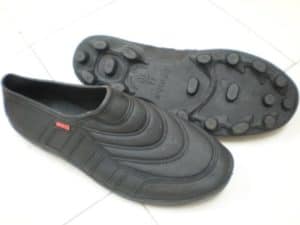 After 6 hours of hoofing it plus a 1 hour break for breakfast at basecamp, we made it back down at 2:00 pm. We were quite happy on the outside but our quads and calves were crying up a storm. We could not walk normally for 5 days. Never has a hike caused so much lactic acid build-up. It was a hike of a lifetime that’s for sure. 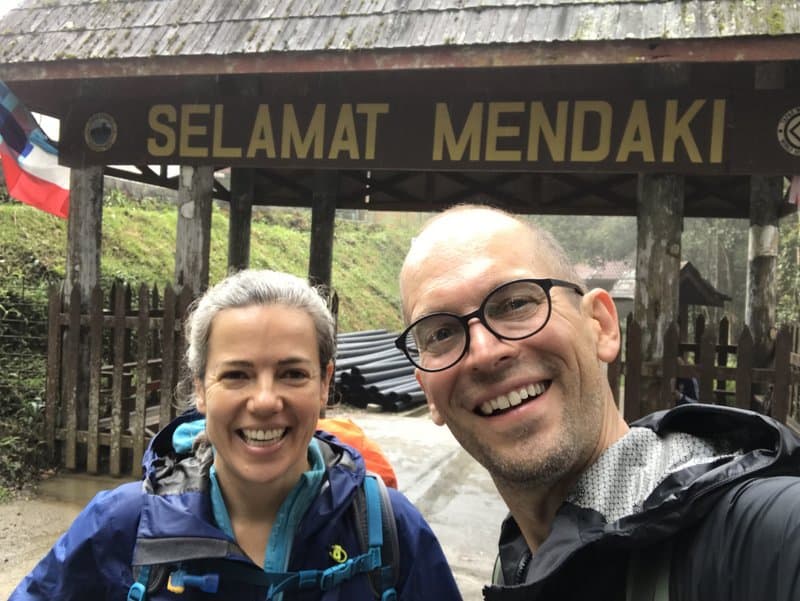 Time to kick back a little. With PADI diving licenses in tow we made our way to the small island of Mabul. For our diver friends wondering why didn’t dive at Sipadan (aka the best diving site in the world apparently) it’s because we couldn’t secure a permit as we booked too late. Mabul was second best being the neighboring island. The biggest difference between the 2 islands is sealife at Sipadan is large and at Mabul it’s often micro.

The most mesmerizing creature we saw was the Green Turtle (Chelonia mydas). The green name is from the color of the turtle’s fat. Due to human activity these beauties are listed as endangered. We could have watched these turtles for 2 days straight. Other creatures we saw included: broadclub cuttlefish, yellow margin moray, crocodile flathead, feather star which looks like a plant, bubble coral, giant frogfish, ornate ghost pipefish, a young Harlequin sweetlips, chocolate chip and granulate sea stars plus so many more which are all neatly logged in our dive book now. 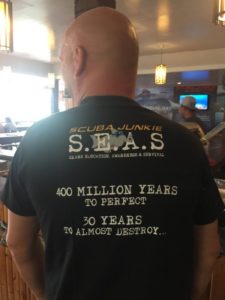 The outfitter we used was Scuba Junkies. We believe they are one of the more conscientious in this area. No one is perfect, and we’re not perfect as traveling isn’t exactly a carbon-neutral activity, but we try our best. Things we appreciated: (1) They practice responsible no touching and glove-free diving.  (2) Turtle hatchery that incentivizes the local community to report eggs to their trained staff to manage the nesting process.  (3) They serve absolutely zero seafood.  (4) Launched the Mabul Community Market. The sale price of each item goes directly to the person that produced it and therefore provides a viable alternative to ocean exploitation (i.e. selling sea shell based items).  (5) They had the smartest waste management we witnessed of our trip (composting and recycling on site) working on a solar system and absolutely zero single-use plastics available for any guests including bottled water.  (6) Started S.E.A.S. (Shark Education, Awareness & Survival) due to the increased demand for shark fins (i.e., shark fin soup) and other products the population of sharks has declined by up to 90% worldwide. (7) They set up garbage and recycling bins throughout the island (a foreign concept to the local villagers who never needed such things in the past), weekly facilitation of garbage picks-up on land and water, hauling of said garbage off the island. Note: most of this garbage originates from other land masses and washes up here. 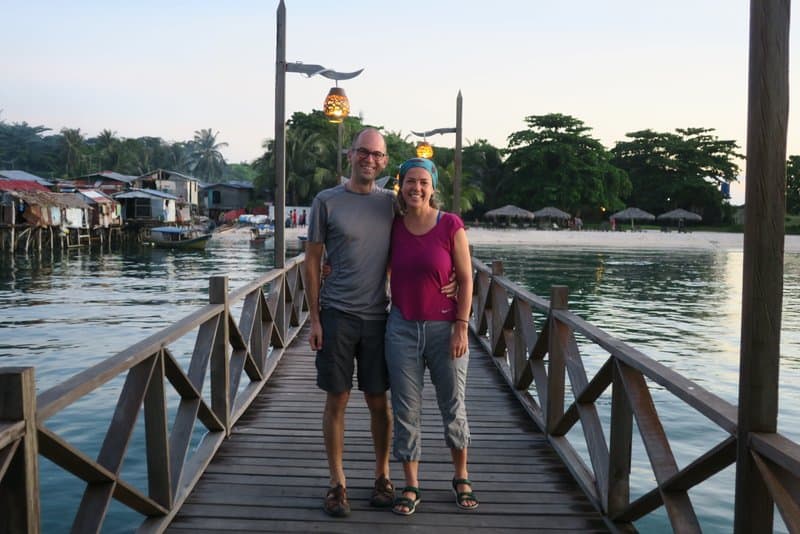 We took a 2 hour taxi ride north to the small and untouristy town of Lahad Datu. We stayed at a B&B called Bike & Tours, run by Itisha and her Swiss husband Simon (recommended by cyclist friends). We spent 2 nights here and 1 in the jungle which was arranged by Simon.

Before we arrived we asked Simon and Itisha what they recommended for seeing wildlife and they said the Bukit Piton tour. He then made every effort to let us know that this is not a typical tour… it’s a little rough around the edges… it’s not for everyone… it’s off the beaten trek… not known by many… we said, “perfect, sign us up”! Simon & Itisha (along with the community and guests like us) are working to restore the native habitat for orang-utan in this area called Bukit Piton. This area was destroyed by fire and poor logging practices. To restore the forest they are planting native trees, one hectre at time (pending available funds). Each tree costs $70 USD and includes 5 years of maintenance which guarantees it will reach a healthy maturity and not get smothered by the forest’s fast growing vines. Their efforts are working. We saw several orang-utan (sorry, they move too fast for pics), a pygmy elephant, civet cats and monitor lizards during the day.

Helping where we can

Person of the forest

Orang-utan is derived from the Malay and Indonesian words orang meaning “person” and hutan meaning “forest”. 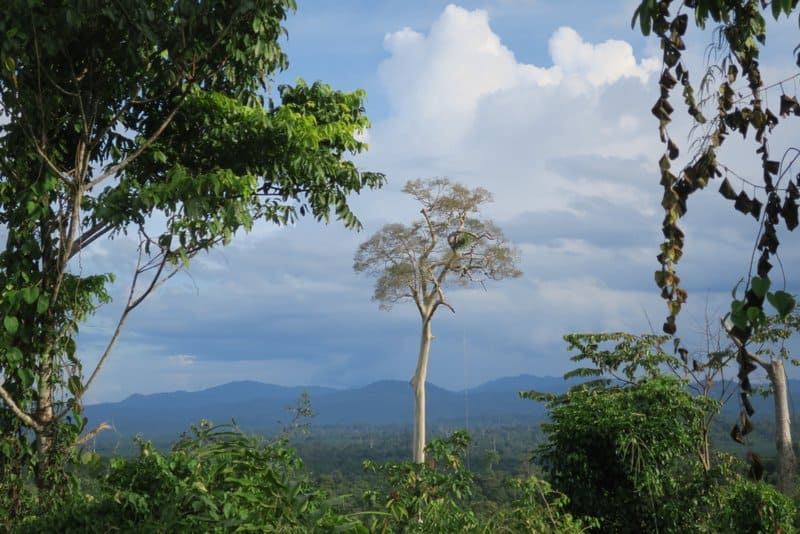 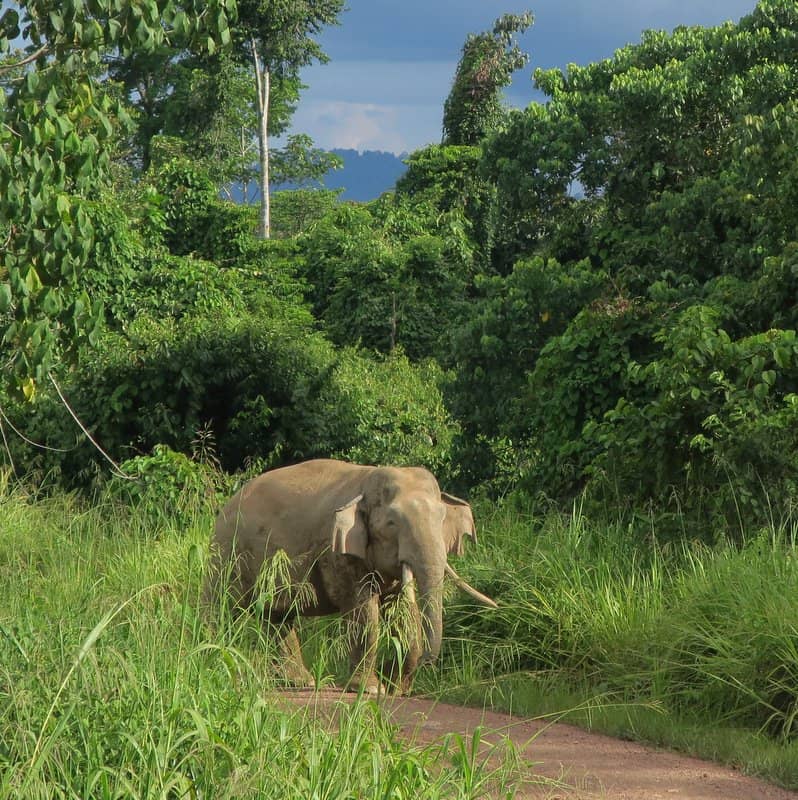 This was a highlight – a once in a lifetime experience. Our guide, Maz picked up the noise of the elephant which sounded like a soft shrill in the far far distance (nothing like the trumpet blowing we hear in movies). As we drove down the rode, very slowly, we saw this beauty the distance. We parked and sat there gazing in wonderment. A WILD ELEPHANT!

The photo we captured here is a Borneon Pygmy Elephant approx. 45 years old. Sadly, this creature along with the orang-utan is listed as Endangered on the IUCN Red List due to habitat loss, degradation and fragmentation.

Sadly we learned that the week prior to our trip 25 Pygmy elephants were killed, mostly by snares set up on the palm oil plantations bordering the forest reserves (which is the elephant’s habitat as well). There’s a conflict between humans and animals happening globally (in the USA it’s with the grizzly bear). Conservation group WWF estimates that only around 1,500 pygmy elephants remain today (make that 1,475 now).

After dinner, our party of 8 piled in the pick-up truck and drove around slowly for 2 hours spotting wildlife. Maz and Janey have incredibly sharp eyes for this. It blew us away what they could spot. As night the orang-utan are sleeping in nests high in the trees. It’s the bird life that’s most active after sunset. We saw buffy fish owl, flying red squirrel, black hornbill, slow loris, civet cat, a sneaky river cat and so many fireflies.

This was an eye-opener. Malaysia is the second- largest producer of palm oil after Indonesia. These efficient oil producing plants were introduced by the British in the 1870s and have now covered most of the land in Malaysia. Sadly this has encroached and eroded the native forests creating deforestation and a massive monoculture. Without diversity and native trees there’s very little habitat or food for native species like the orang-utan and pygmy elephant. From the little we know it’s a bittersweet oil debate. Palm oils are in almost everything we consume from foods to cosmetics. Some say coconut and even sunflower oil require far more land so palm oil is actually less impactful land-wise. What do you think? If given the choice we’re motivated to purchase Fair Trade Certified™ sustainable (__ fill in the blank __) oil. 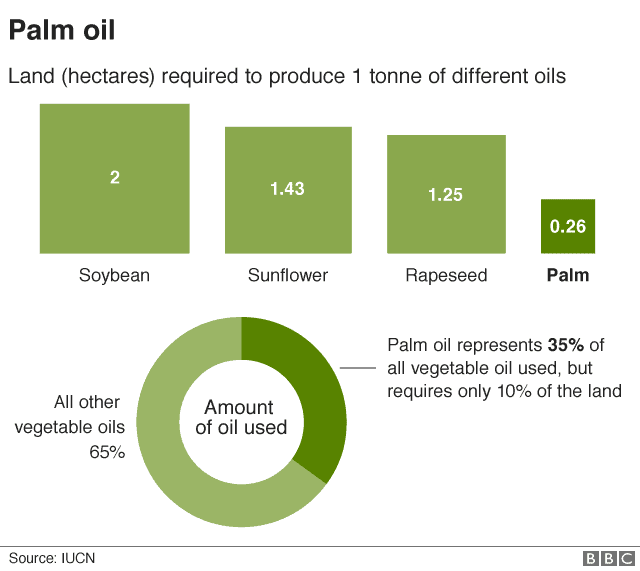 Travel for westerners is pretty easy and joyful as long one is mindful and sensitive to the muslim culture. The primary religion here is Islam and secondary is Buddhism. English is an active second language and in one state, Sarawak, it’s the first language. We found the people to be very kind and curious, often greeting us with a “hello” or “be my friend” and asking where we are from.

Environmentally, parts of this trip were hard to witness, understand and process. We saw a lot of garbage in the water and a lack of what we would consider basic waste management infrastructures. For us, travel has become an educational eye opener – we try to better understand different cultures, ideas and practices. We try to withhold judgement as we’re quite aware that we come from a privileged and wealthy society and we are far from perfect. Sometimes travel is about checking-out and relaxing from the rest of the world and sometimes it’s about learning something and checking-in with the rest of the world. This trip was a bit of both.

Live simple so others may simply live. – Mother Teresa

Here’s one example why. These are local dwellings on the island of Mabul perched on a shore of garbage. The locals grew up eating their meals on bananas leaves which are compostable and can be tossed in the ocean and fed to animals. They drink boiled well water and live simply compared to our standards. Western conveniences like single-use plastics (i.e. plastic water bottles, plastic utensils, plastic diapers and plastic bags) have been introduced but there’s still no infrastructure to deal with these “conveniences”. Much of this is washing up from other land masses, daily. 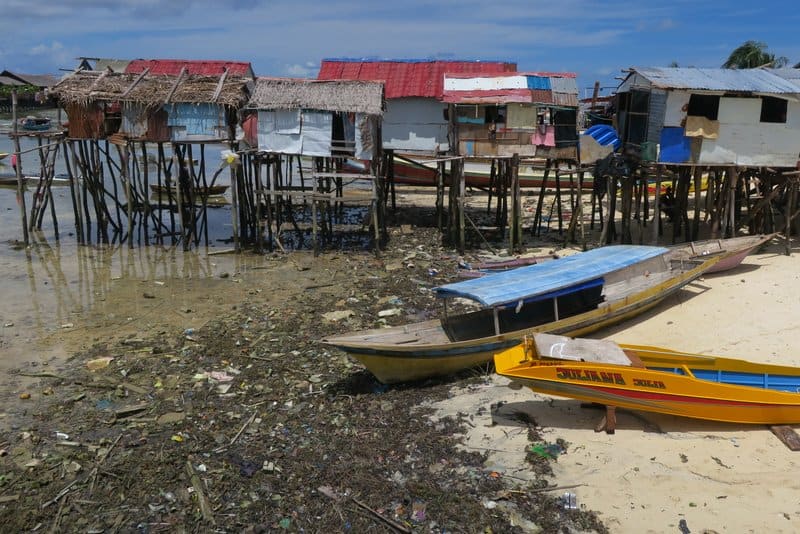 We leave you with a movie recommendation which Scuba Junkie played for all guests one evening: Racing Extinction (trailer link). It’s an eye-opener.