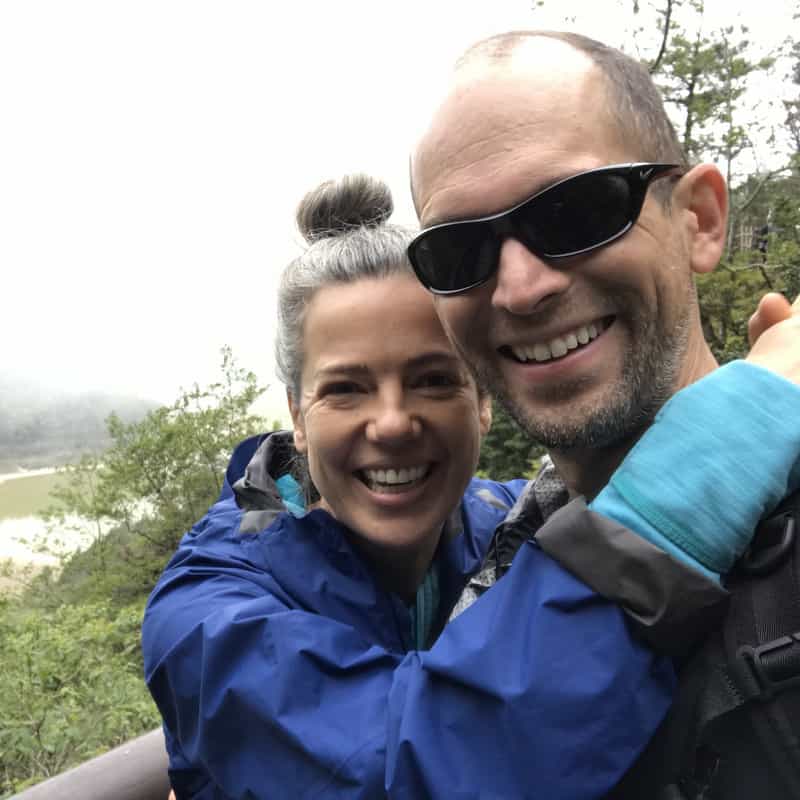 The past four months were a whirlwind of exploring new places (Tasmania & Kyoto), hosting family and friends in Taiwan and squeezing in some of that work stuff to make it all possible.

Come April, the only hiccup was a 3 week bout of apartment construction that coincided with a 3 week bout of bronchitis that had Passionfruit in bed for most of it. She finally beat it by turning the apartment in to a sauna which tested the marriage, but it worked.

Labor Day is May 1st here so we had a long weekend to play with and a messy, busy apartment to escape. Adults get the day off, but kids go to school. HA! The other motivator to jet off was the air quality index (AQI). It was crap on the west side of Taiwan (where 90% of the population lives, like us). The east coast is often cleaner (less people, less industry). We check air quality almost daily via this free app and you can too. If you live near any industry, traffic and/or coal-powered plants it’s something to pay attention to.

Off to cleaner & unchartered pastures

For such a relatively small island there’s a lot we have not seen in 2.5 years. You can fit 3 Taiwan’s inside the state of Oregon and we only scratched the surface there in 7 years. In the northeast nook of Taiwan, there’s a county called Yilan that has cliffs, plains and beaches. From what we knew, we thought it would be a nice weekend jaunt:

#3:  it’s famous for hot springs, specifically the town of Jiaoxi

Cruising in the Fog 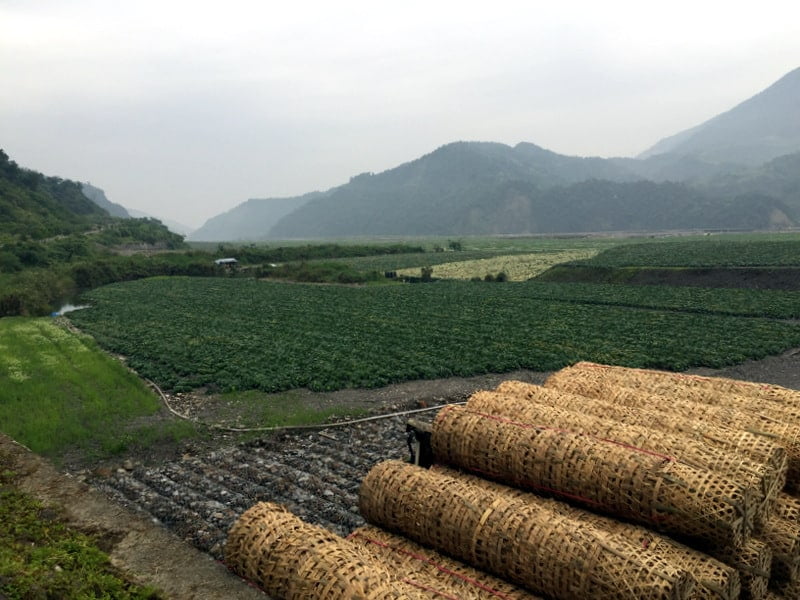 It’s about a 2.5 drive from Taichung (where we live) to get to the town of Jiaoxi in Yilan then another 2 hours inland to get up in the mountains. The roads are extremely narrow, steep, hairpinny and shrouded in fog so it was slow rolling. However, the cool misty fresh air made it all worth it. Nothing feels better on lungs recovering from bronchitis than cool misty air.

Why we come here: 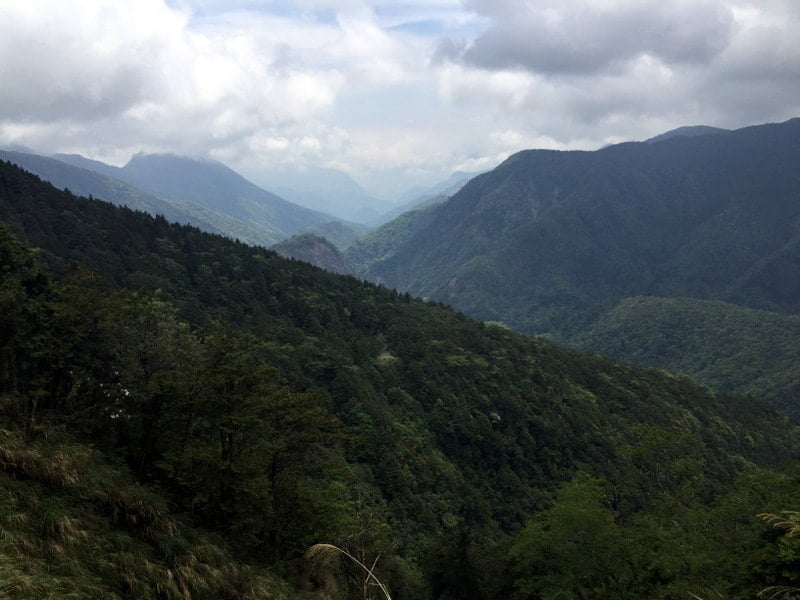 Next to the human hot springs is 284 f degree water bubbling out of the earth – apparently perfect for cooking eggs and corn. 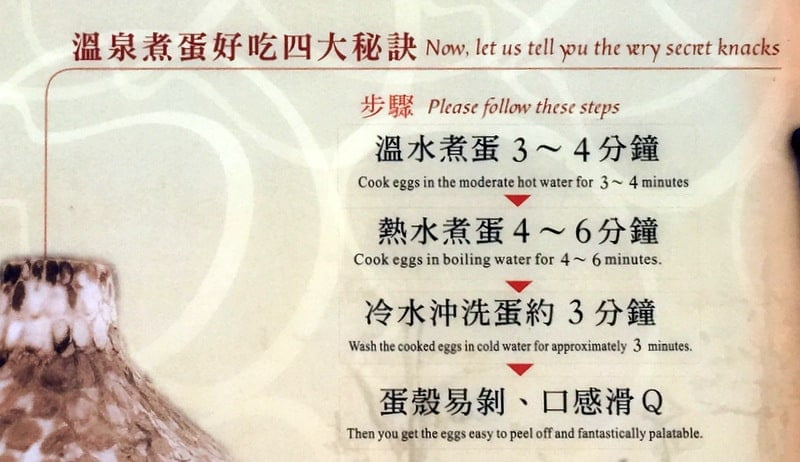 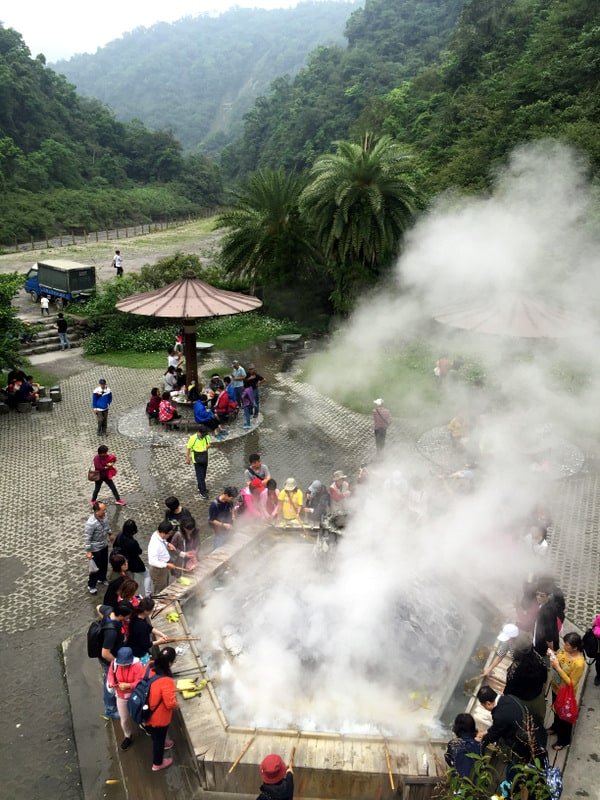 We decided to hike the Cueifang Lake Circular Trail because it was remote and quiet. This lake sits at 1,840 meters (6,036 f).  When we approached the “view” we saw nothing as it was socked in, but within minutes it lifted and we got to see this. Honestly, we were just happy to breathing fresh air and be amongst the trees. 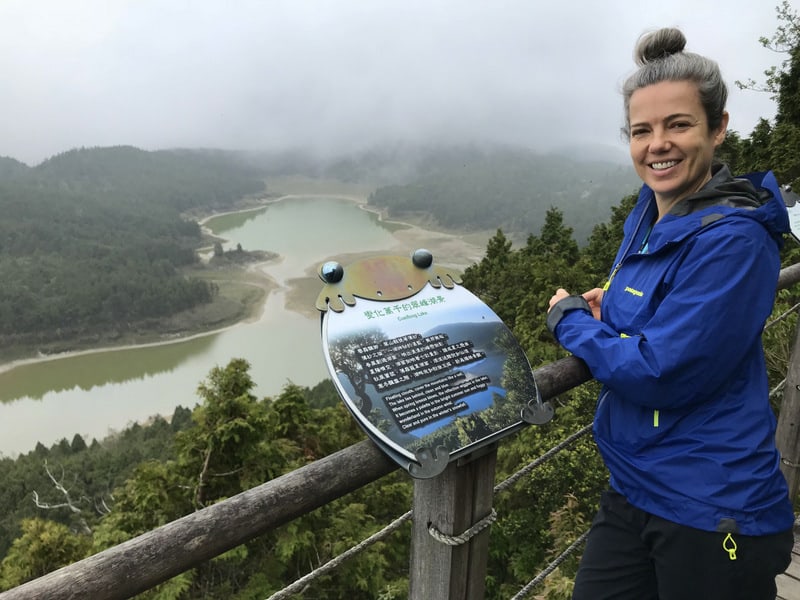 Our hotel was in the small, chill town of Jiaoxi which is known for its hot springs. We booked 2 nights at Just Sleep hotel where every room has a large stone tub for private hot spring soaking and public soaking rooms inside and outside. Most hotels in this region provide such amenities plus a breakfast (average $75-100 a night for a nice hotel). 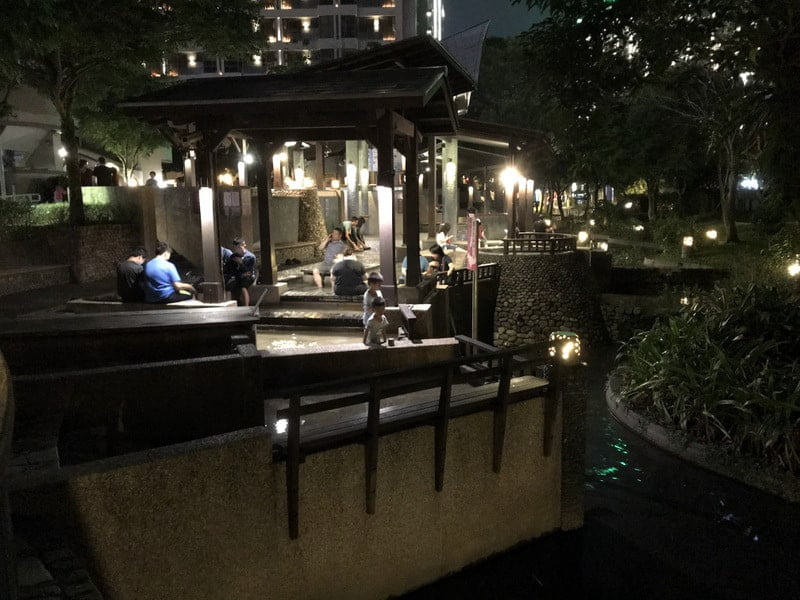 The town has several beautiful parks with meandering pathways to public hot springs and opportunities for foot soaking and fish kissing of the feet. Generally speaking, the parks in Taiwan are safe and clean and open 24/7. Have yet to encounters the “creepy man”, nudity, homeless, drug addicts or gangs of unruly teens. It makes for pleasant walks.

This is REALLY popular all over Taiwan, but particularly in this town. Basically you allow the garra rufa, the toothless fish, often called Dr. Fish to “eat” dead skin off your feet. Some looked big enough to suck a big toe right off and that’s sort of what it felt like. We paused during the feeding frenzy… wondering if the fish may be starved so customers get a good nibbling…. which lead us to the PETA site which gives a thumbs down and for good reason. We feel bad now. 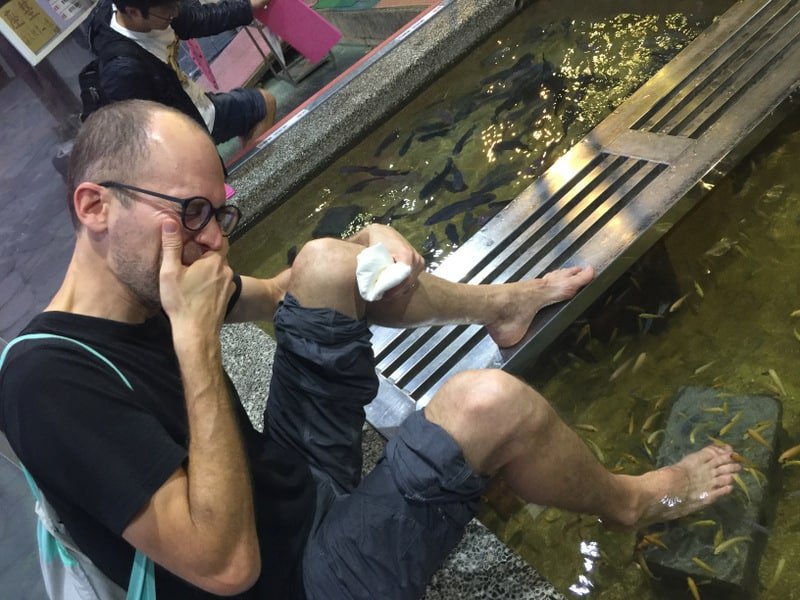 The last day we did a short hike which leads one up alongside the Houdongkeng Waterfall (猴洞坑瀑布) and then to several beautiful crystal clear soaking pools. We rock hopped and got a natural foot nibble by the local fish. We shall return when the 100+ degree days of August arrive. 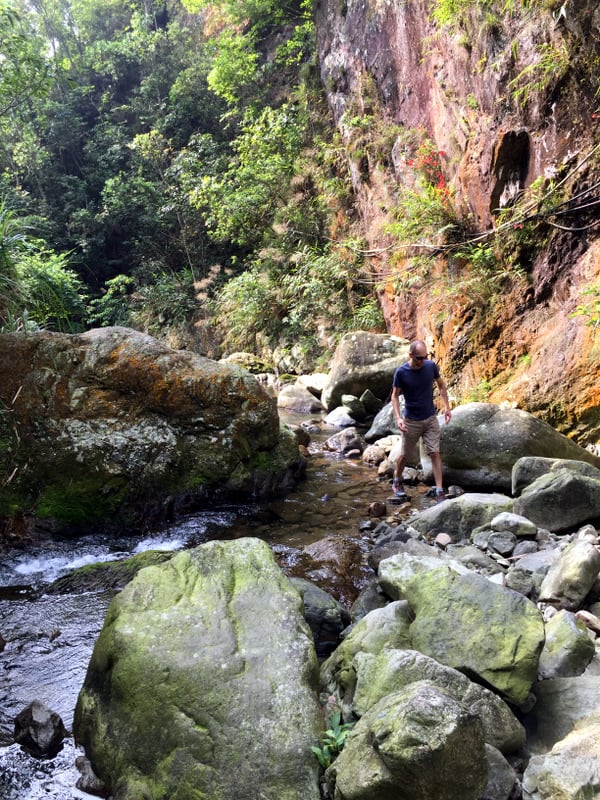 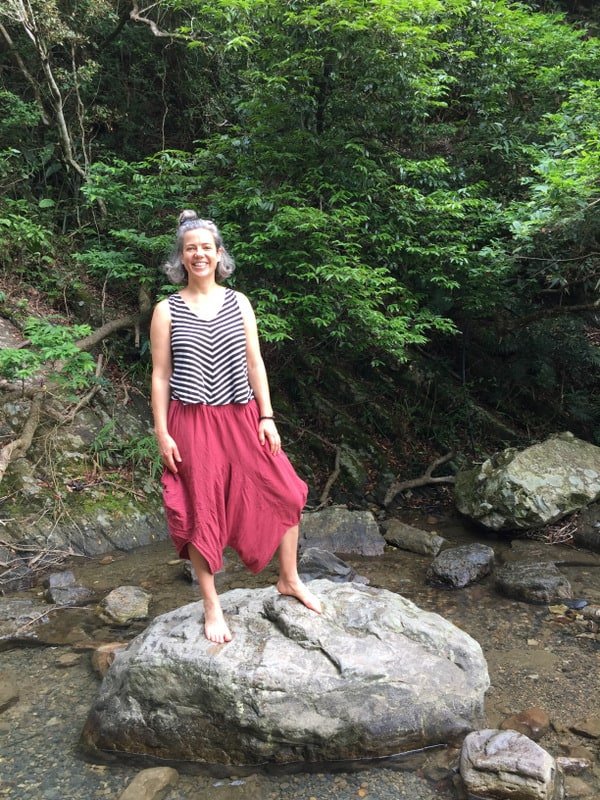 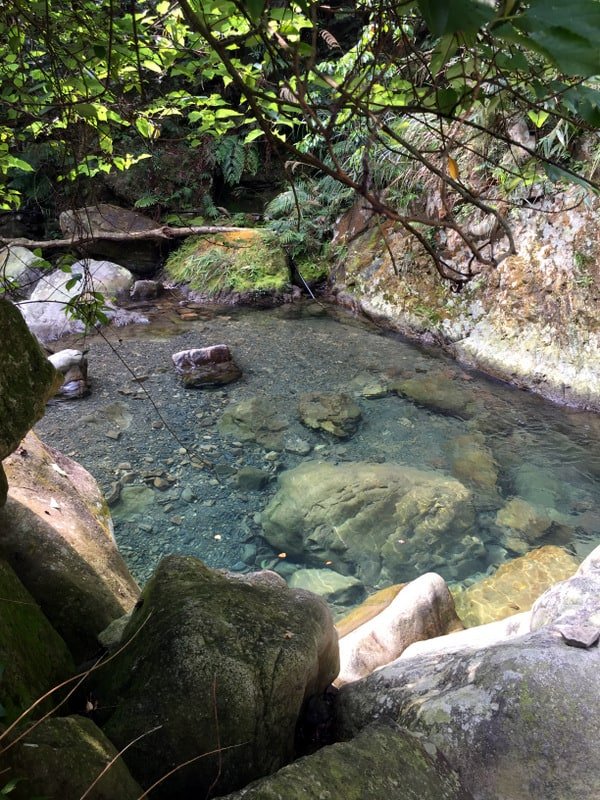 On the way home we drove slightly out of the way to check out Fulong Beach for a swim in the ocean (it was a cooker of a day) and to see the International Sand Castle Competition. Blew the pants off the Stone Harbor, NJ drippy castles that’s for sure. Some favs: 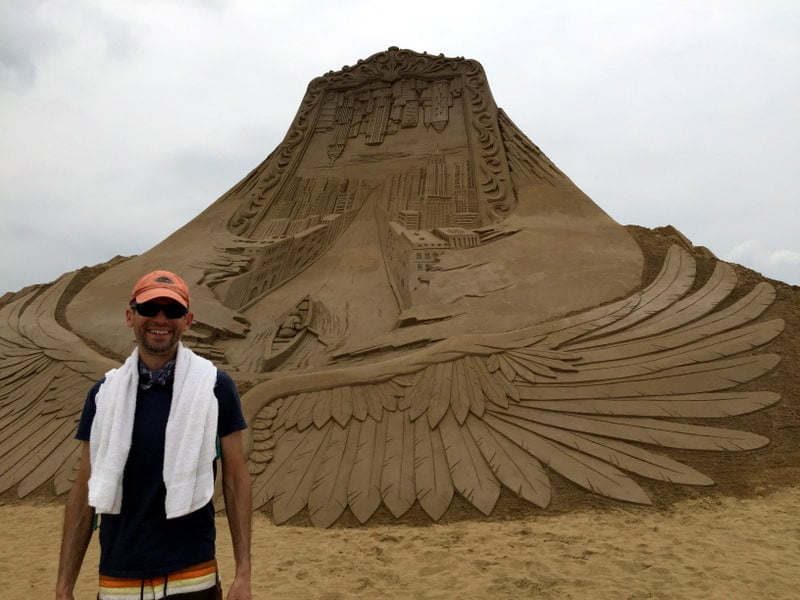 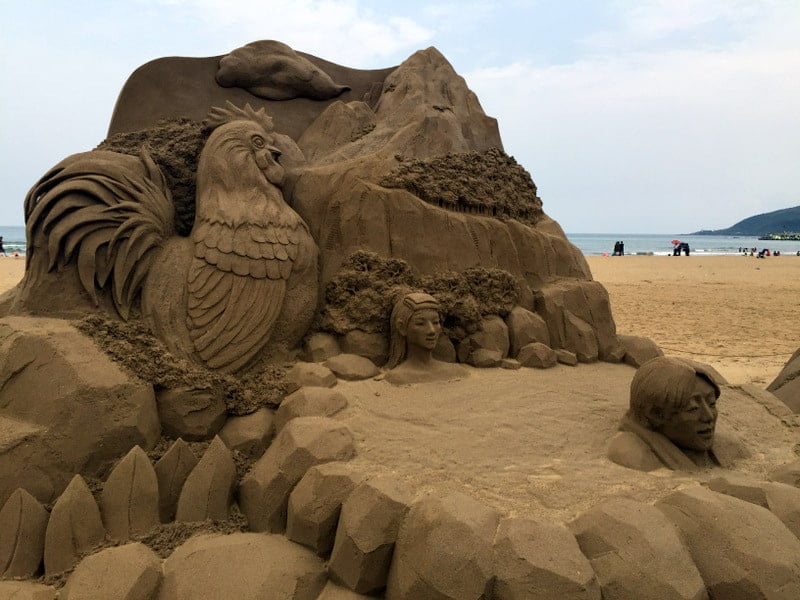 We crammed a lot in a 3 day, 2 night weekend and report that Jiaoxi, Yilan is a great place to escape the city life! It has it all… mountains, rivers, beaches, hot springs, pulled pork sandwiches, craft beer and ice cream. Four thumbs up from P&P.

My sister, Tatiana and her husband, Joe, live in Shekou, China, just a short 1.5 hour flight from us in Taiwan (our countries don’t get along, but we sure do). They both teach English at an international school and recently published this short film about their 3 week holiday bike trek through rural China. It’s filmed and produced by Joe with Tati as adventurer/actor/hot pants connoisseur. We may be biased, but we think it’s fantastic. It’s a rare peek in a not touristy area of China. Spoiler alert: we hope to see more films once they relocate to the beautiful island of Jeju, South Korea this August for new teaching assignments!!

Cheers to the onset of summer and lots of fresh air!

P.S. Did you know we’re still publishing our Taiwan Observations?