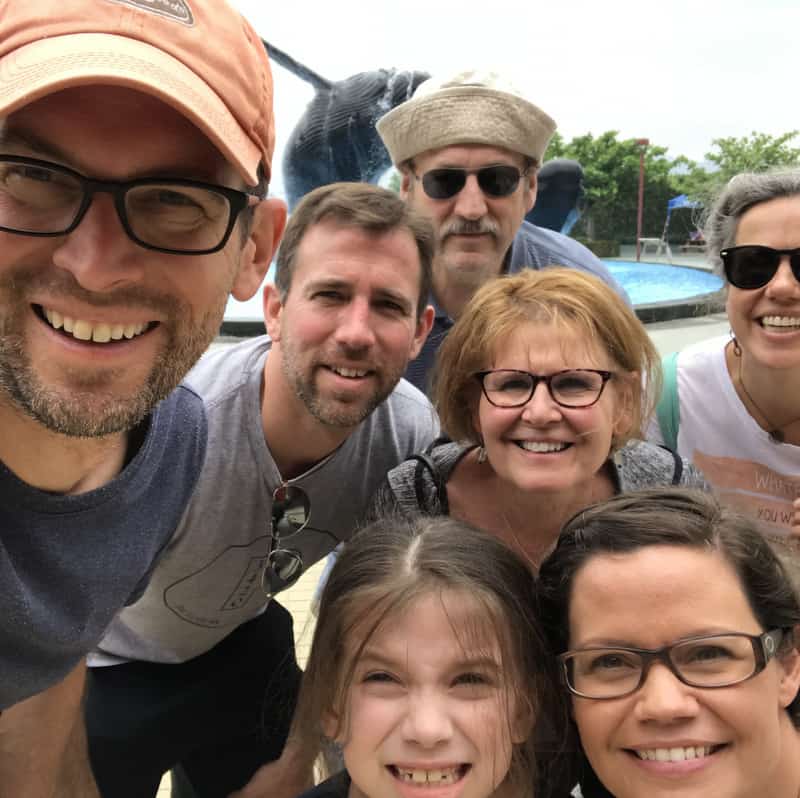 What’s better than a 6 pack?

A seven pack! That’s what our household became for one week in March.

You see, last year Pickles’s dad and mom came to visit – after a pit stop in Bali so they could build that base tan. They must have liked Taiwan so much they dragged the rest of the immediate family over: Pickles’s brother (Steve), his wife (Jessette) and their daughter (Lily) who is now holding the record for our youngest guest.

Since jet lag is a bear from the USA we eased in to the cultural immersion with a bubble tea from Chun Shui Tang Teahouse* and a foot massage! It’s the only way. *It’s said that this place is one of the two origins of bubble tea. The other teahouse is also in Taiwan which leads me ask, when is Bubble Tea Wars coming to Netflix?

One way to reconnect with fam is to get tatted. It’s true. A family that tats together, stays together. We learned this in Portland. I think it’s written in the city’s constitution. 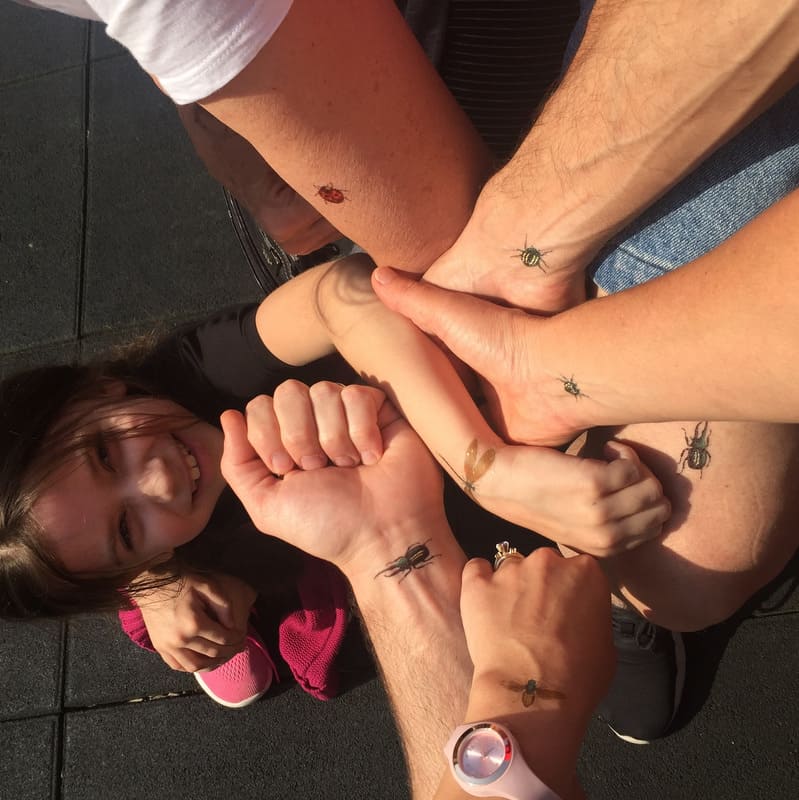 A film crew approached us (yes, the exotic 7-pack of Americans) and asked Lily if she would like to be in a commercial, driving some hot wheels. Heck, ya! We have no idea when or where this will be aired so if you see it, let us know. Lily wants her royalties. 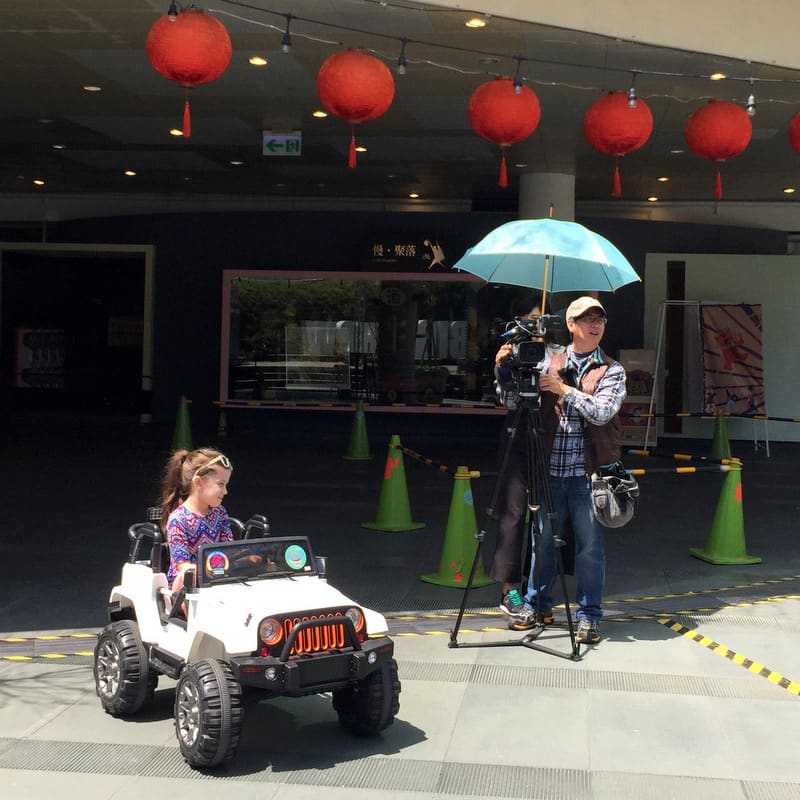 Exploration of our ‘hood

By foot, bike and a few pit stops to climb trees we logged some serious sneaker miles. We visited the National Museum of Natural Science (cool animatronic dinosaurs), the National Museum of Fine Arts (phenomenal A-Sun Wu Retrospective), honed Lily’s photography eye with her snazzy new pink Polaroid, crafted a custom music box at the National Theater’s Wooderful Life DIY shop and even had time to pose for a caricature along the parkway. 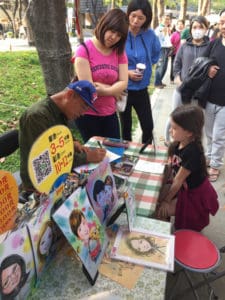 We also spent lots of time eating out and teaching Mimi (grandma) how to use chopsticks. After Lily mastered it she graciously offered up her trainers. 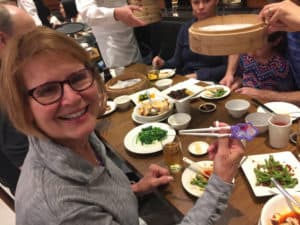 If we weren’t eating it, we were wearing it. Everyone looks adorable in a wearable cream puff, right? Oh, Taiwan. You’re so cute. 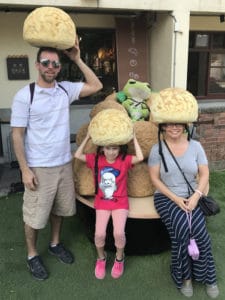 After all the city stuff we jetted south to Kenting for a 3 day, 2 night trip. We had never been to Kenting so we were excited to explore new turf with the family. Kenting sits at the most southernmost point of the island, a four drive from Taichung. Its beaches and waters are popular with snorkelers and divers. We rented a house for two nights in Hengchun’s Old Town. Old Town was built in 1873 during the late Qing Dynasty and is surrounded by a massive brick wall of which only half is still remaining. This home sits adjacent to the north gate.

We were bestowed beautiful weather albeit a little muggy for the Corn Huskers at times. We had a nice long walk in the park, saw a Taiwanese macaque monkey (the only native primates living in Taiwan), strolled through the massive Fairy Caves, observed locals worshiping at Gaoshanyan Fude Temple (which has interesting coral limestone nooks and crannies) and on the way back to the van we found ourselves walking straight through a honeybee swarm! This is an cool phenomenon to witness (my third now). Swarming bees have no interest in humans. They are in fast pursuit of finding a new home a.s.a.p. They have outgrown their existing hive so about 60% of them vacate in search of a new home. As quickly as we knew what was happening, they were off towards the forest, likely in search of hollow tree to make as their new hive. I sure do miss beekeeping. 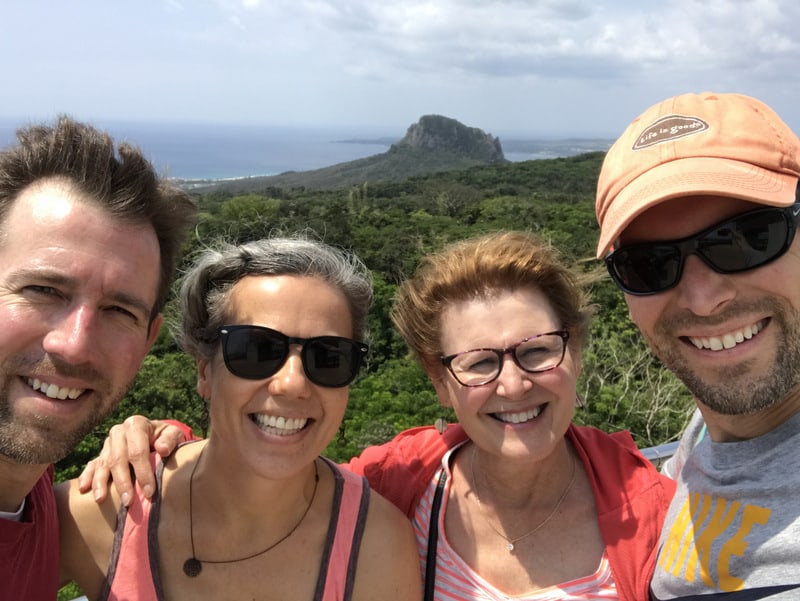 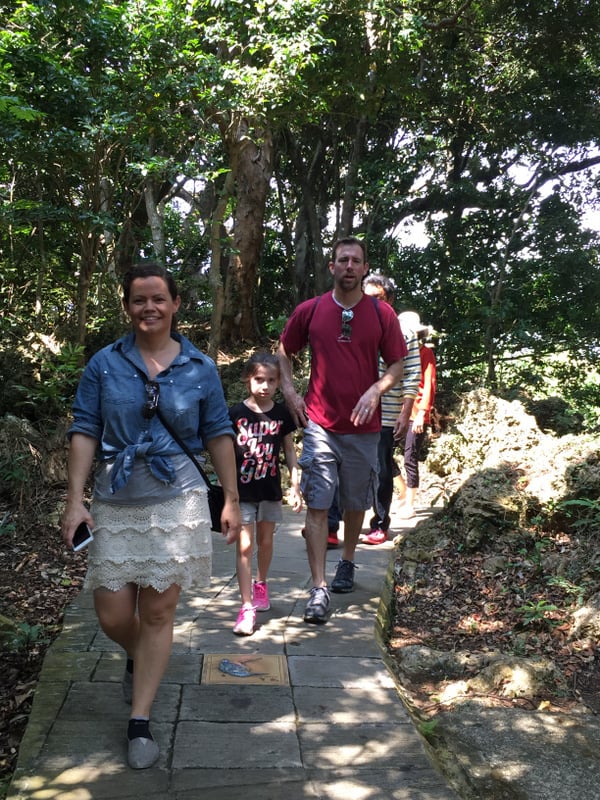 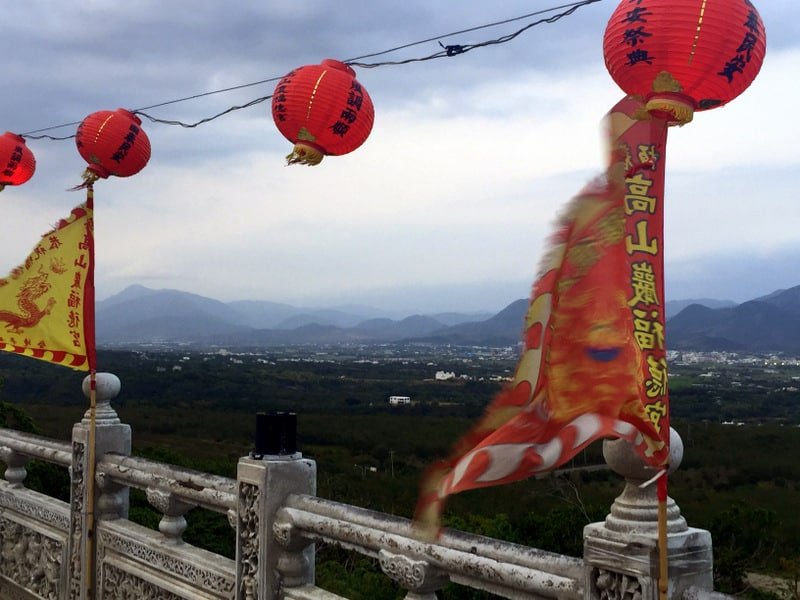 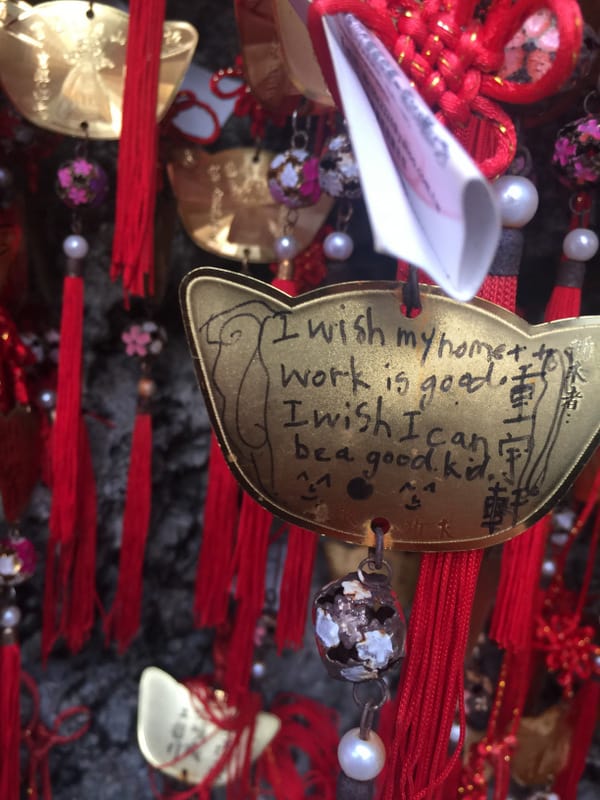 Opps, I did it again!

Hello from the southern tip of the island 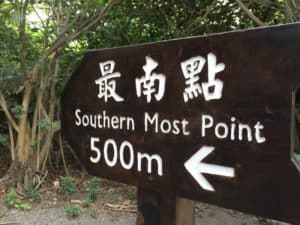 Our turn to play in the water

We don’t have any pics, but we snorkeled at Little Bali Rock! The water and marine life was astounding! It compliments the aquarium trip quite nicely. And only one person got their phone wet and lost their wedding band. If you see a sea snake out there sporting a platinum band with small four diamonds, please call us. 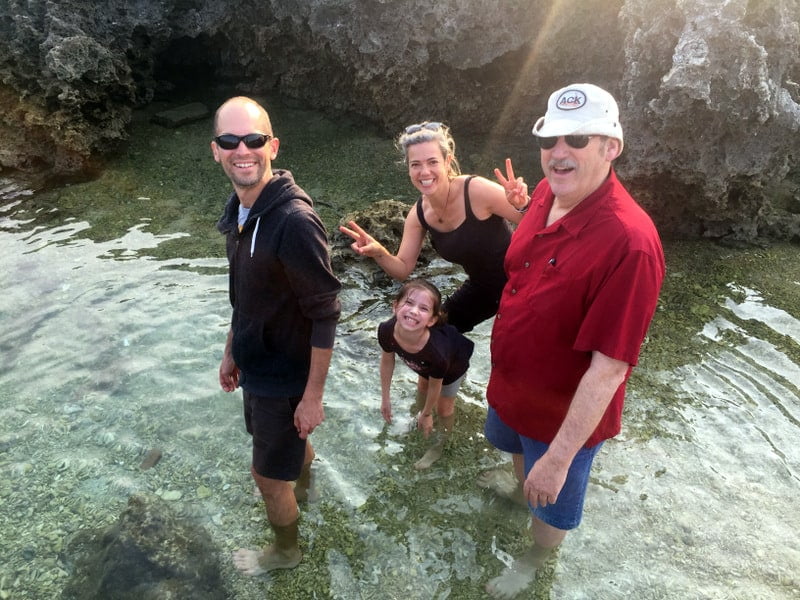 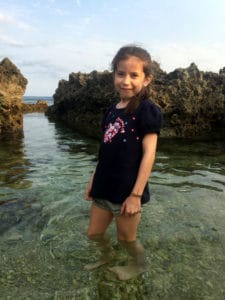 After sightseeing and eating at the night market we were tuckered, but found a few rounds of Connect 4 in us. This is a favorite child hood (and adult) game so it was fun to share with Lily. We also had some hilarious rounds of CatchPhrase.

This is a popular pastime down in the southern part of the island so we fired ’em up! And they’re really called “crazy karts”… perhaps Go Kart’s quirky, wily cousin? 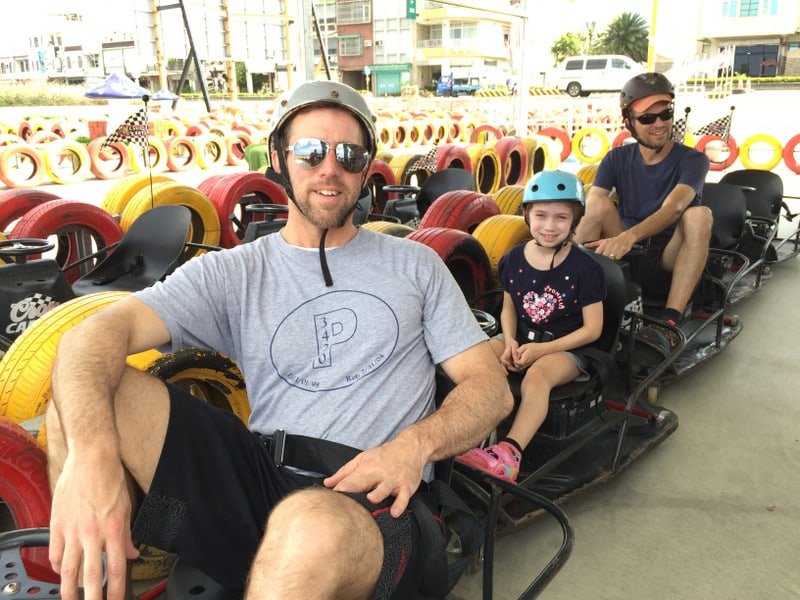 A toast to health

The last night in Kenting, we enjoyed a delicious meal at Bossa Nova and very large cocktails to soothe the loss of Steve’s phone and ring. It helped a little. We toasted to our health and said phooey to the material stuff. We didn’t lose the real good stuff. 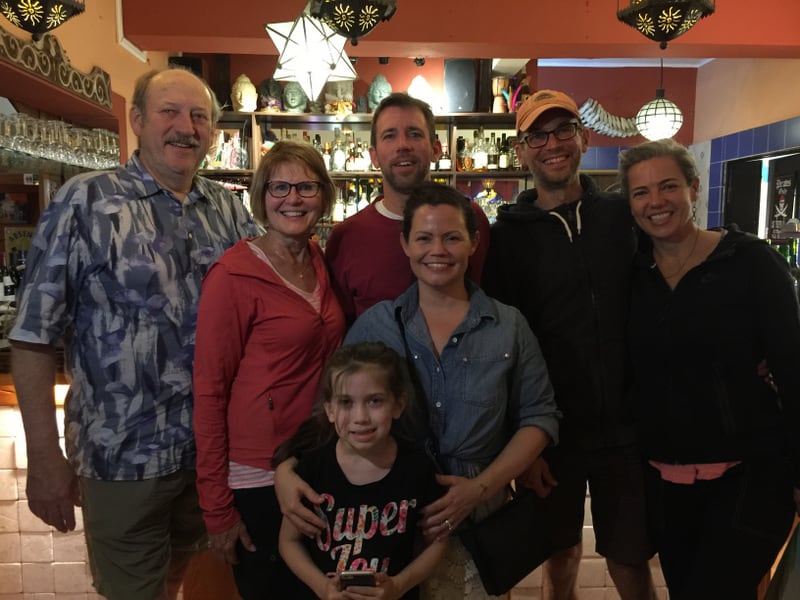 Thanks to Grandpa and Mimi for rallying the troops and coming back to see us.  There’s not much that compares to Taiwan in the USA so we love being able to share what we know of this island. Ok, we know about only 50% of what’s going on over here. We live in a state of being lost in translation, but it’s fun and we’ve accepted it. Thanks for playing with us in our home away from home! It was a blast.

What’s next? Hint: four out of five family members flew back to Nebraska and one stayed on for another adventure… stay tuned for that in the next post.

Thanks for following P&P. We love you. We miss you.

One thought on “Guests: Berggren Family”