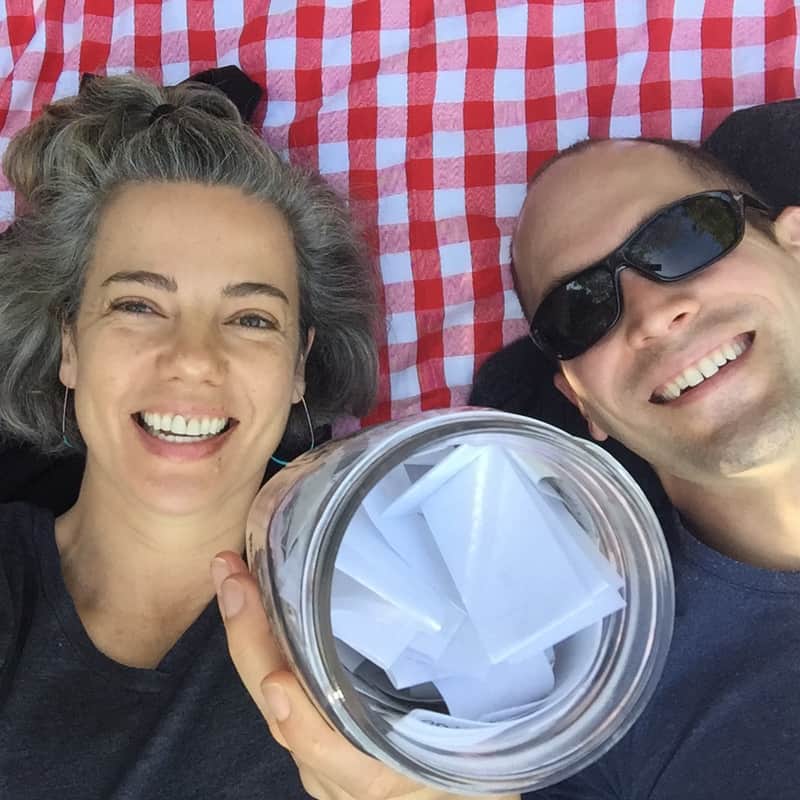 Wrapping up the year of the chicken

After two years this place called Taiwan or as we call it Sweet Potato HQ* is feeling more like home (that is, our home away from our other home). We toasted in the new year with a couple of friends, watched fireworks from the balcony and were in bed by 12:30. The next day was a beautiful 70 degree day, perfect for park lounging. A tradition in our wee family is to read our gratefuls on new years eve or January first. Do you have a tradition to close out the old or kick off the new? We would love to hear about it. *Taiwan is shaped like a sweet potato. Fact!

We’re settling in and it feels good. We have friends! We know where to buy milk, veggies and locally roasted coffee beans. We even have our favorite local dumpling joint which we used to call “Blue Dumpling” simply because the logo is literally a blue dumpling, but now we call it Scientology Dumpling because we saw some Scientology pamphlets inside. Oh and we even have a go-to for pizza delivery.

Unfortunately, we also have a dentist now. Passionfruit chipped a molar on the last day of 2017 which is a terrible time due to the holiday to find a dentist. She spent the first week of 2018 seeking out a dentist fluent in English.

Medical terms aside, we can converse basics in Mandarin. We can tell a taxi where we live, buy stamps at the post office, make a foot massage reservation (over the phone which is another challenge as it removes any body language) and reserve the mahjong room in our apartment building! As I said, these are the basics IN TAIWAN!

New years day we strolled to the National Museum of Natural History’s grounds to kick off 2018 – with our jar of gratefuls. It works like this: We keep a jar on our kitchen table (somewhere obvious is the point) with slips of pre-cut paper sitting next to it. You simply write what you are grateful for, date it, fold it up and stuff it in the jar. At the end of the year it’s a sweet walk down memory lane of all the small (and big) things that made us smile throughout the year. For example, I learned that Pickles’ is grateful for GRAPES. Who knew?

This is a favorite feel good photo from 2017 that makes us smiley. Jill on the right is a friend of ours who works at Taihu Brewery and the baby… that’s Chocolate… he belongs to someone at the bar. One of the many things I love about Taiwan is how chill the babies and kids are. I guess when mom and dad strap ya in a baby bjorn and hop on a scooter not much phases ya. We’ve seen kids asleep on scooters too. Chocolate’s dad said his name is a play on words from his real Chinese name which I can’t recall because I was captivated by his cool barfly demeanor and his good taste in beer.

Formozza is a another play on words. Taiwan was formerly known as lha Formosa, by the Portuguese in 1852. It means “beautiful island” and we’re all familiar with Mozzarella! So, these are our new cheese friends. Formozza is run by Henry and Brenda (on right – Henry not shown as he’s always in the back making cheese). Everyday Henry wakes at the crack of dawn to buy fresh milk at the farms and then he makes all sorts of delicious cheeses and butter, like truffle butter! Being from Portland, we’re suckers for delicious, locally sourced and produced foods made by hip and groovy people.

Recently, we started getting our D.I.Y. on and we started with something we can’t buy here, ginger beer (it’s fermented and non alcoholic). Ginger is plentiful here and it partners well with the pork dumplings that Taiwan is famous for, so this seemed liked a perfect D.I.Y. project. It’s not only easy to make it’s a darn close to our fav back home, Reed’s Extra Ginger Beer. This is the recipe we use (we toss in 20% more ginger too).

I was inspired from a Shibori class I took last year (never blogged about it though) and finally gave it a whirl on my own. Shibori is a Japanese manual resist dyeing technique, which produces patterns on fabric, the technique dates from the 8th century. Yes, 8th century. It came way before tie-dye, but the concept is similar. Typically natural plant dyes are used such as indigo which is derived from a green leaf. In this class we used a brown dye derived from a plant root.

Indigo dye is gorgeous and at some piont I would love to get my hands on it (the real plant that is). In the meantime, I use what I have and that’s turmeric! I love this spice and cook with it all the time. The color is gorgeous. You’ll find lots of DIY blogs on this technique. I used this one. 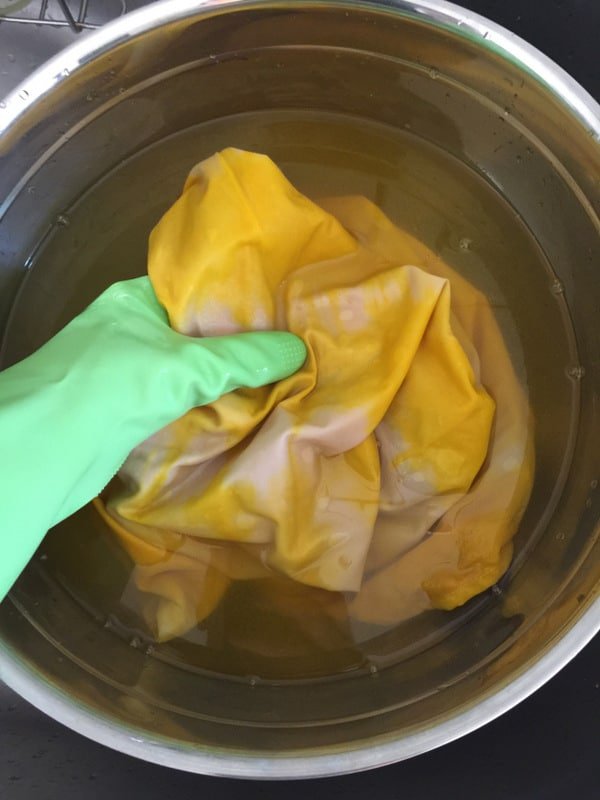 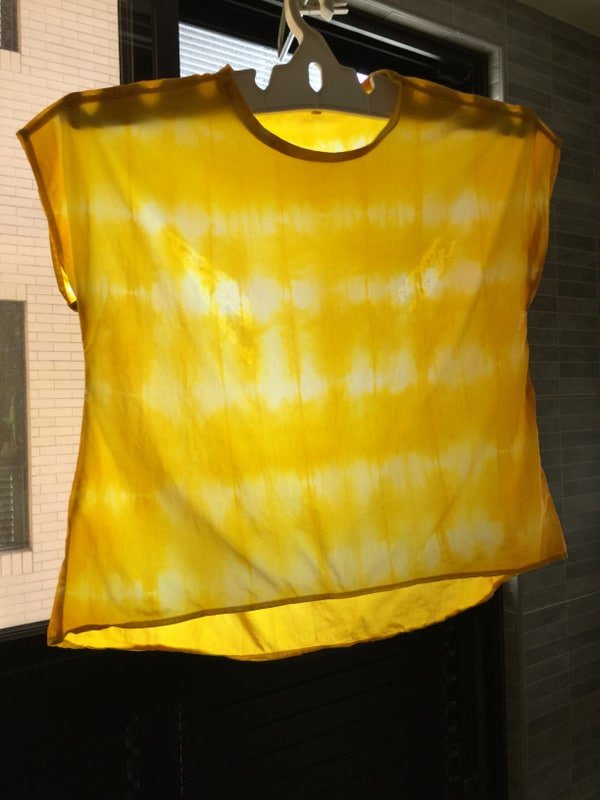 I did a post last year on loofahs. I was blown away to learn that loofahs didn’t come from the sea, but from the garden! It’s an edible vegetable, quite mild in taste, yet tasty as a side kick to any stir fry or protein. It’s a prolific growing plant here, like the zucchini back home. Since I was loofah curious and think they make great body scrubbers, I thought I’d make my own. I bought a couple at the market and let them dry out in the kitchen which took a month or two. They never smelled weird or got funky.

This is not my crafty work, but I saw it at a cafe which I thought emitted the loveliest light. Loofah 2.0 D.I.Y. project for sure. My loofahs were reincarnated as skin scrubbers. They’re the ultimate exfoliators! 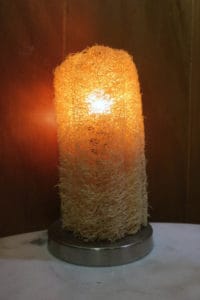 An inspiring meet up

I adore Taiwan and think the recycling practices here are impressive and often out pace many urban cities in the U.S.A., like (gasp) Portland. However, there’s a dependency on single use plastic bags which is strongly linked to the scooter culture. With every purchase, particularly food and drinks, you receive a plastic bag, with a handle, so the item can be transported via scooter (the main mode of transport here). It’s convenient which is why most of us use single use plastics, but we don’t have to.

I got a wild hair to write Bea Johnson who is the woman behind the zero waste home lifestyle. Her thang? Her family of four can fit all the waste they accept/create in one year, inside a mason jar. It’s impressive. She’s certainly not the first person to champion this lifestyle, but she has given it a mod, chic and non-judgmental touch. I dig it and I think there’s a huge pay off that positively effects our health, wallets, time and our beloved environment. She proves it too. We’ve implemented some of her practices and try to follow her 5R rules: #1 REFUSE, #2 REDUCE, #3 RESUSE, #4 RECYCLE and lastly #5 ROT.

I emailed Bea and asked if she would consider visiting Taiwan to do a talk. I got a response within a couple days with an enthusiastic, “Yes” and “would I want to help make it happen?”. Bea’s new book was about to be translated in Mandarin so the timing was perfect. She connected me with her publisher and they were surprised that I was first an American and secondly that I was interested in arranging her to talk here. To make a long story short, her publisher (newly inspired by my interest) decided they would create an event in Taipei (the capital of Taiwan) for a talk and book signing. It was awesome and there was a huge turn out that spilled into standing room only.

Can you teach an old brain new tricks?

Even though our brains feel like potatoes at times, we still keep up with our Mandarin lessons. We remind ourselves that it’s one of the hardest languages for English speakers to pick up, and it’s the most spoken language in the world. Just a mere 1.2 billion speak it (that’s 1 in 6 people in the world). Um… Hola! Spanish is the runner up at about 4 million, then English.

After two years we feel we know the lay of land in our city and don’t rely on maps much. It’s most familiar and comfortable by bike and foot. We do most of our grocery shopping this way. We can also can hop in a taxi or Uber which is so convenient.

The love of being outside & moving

Every morning (starting around 5:30 am) the parks and properties of the many museums are filled with walkers, tai chi groups (with and without swords), ballroom dancers, fan dancers, jazzercisers, the laughing yogis, badminton and lots of other random sights such as, for lack of a better word, self-slapping/hitting folks. It’s common to see people hit/punch/slap themselves which is supposed to be good for blood flow and relieve stiffness (like cupping and massage). Try it, it feels good. Speaking of exercise, we recently started swimming at a decent olympic sized pool (one inside and one outside) that’s only a few blocks from our apt.

I’ve taken a huge liking to this game. I love the camaraderie and the feel of the tiles as they clink together. People say the game play is similar to rummy. It combines skill, strategy, calculation and luck! And no we don’t bet, but it’s a common practice. To play you need four players, but the more friends who know how to play the better (FYI Portland Feisties, you will be recruited). Since Sandy and I own a mahjong set and also have “mahjong rooms” in our apartment buildings (yes, it’s that much of a thing here!) we take turns hosting. We play at least once a month.

Left to right: U.S.A. (me and not shown, Kerry), Taiwan (Sandy), Germany (Bianka), Japan (Kinuko) and Kenya (Susan). Sandy and Kinuko taught me the ropes. We’ve been playing over a year and half now. Recently, I’ve recruited Bianka (a biking buddy) and Susan (we met in the cheese section of the grocery store in search of ricotta which is SO hard to find here until Formozza opened up).

Some of my first Mandarin words stuck because of Mahjong, like all the numbers. All of our languages fly when we play and we always learn something new. For example: mimi in Mandarin means “secret“, in Japan it’s”ear“, in Swahili it’s “I” and in English, a cute nickname for “grandma“.

Inside front page of the daily Taiwan Times is the daily Lunar Prophency. It is always entertaining and often helpful! These are a few of my favorites, posted on the fridge. Top right was a message straight to me, the freelancer: GOOD DAY FOR: “TAKING OFF MOURNING GARB”. What? I can’t leave my pajamas on all day? 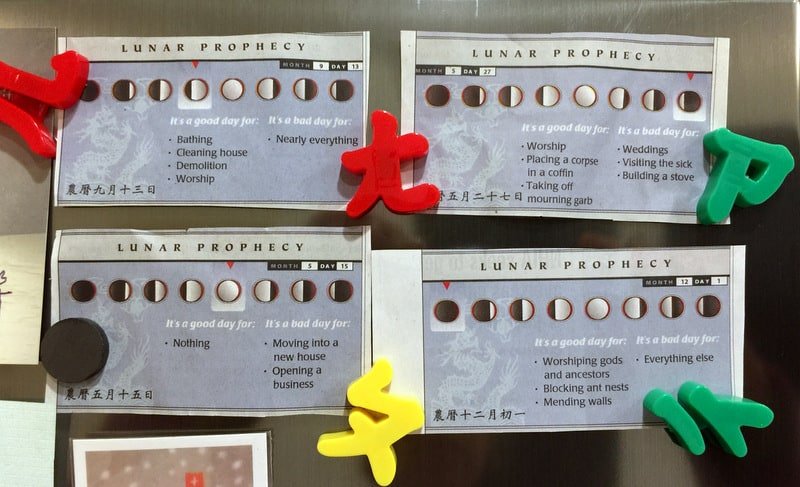 Speaking of moons. Asia rings in the 2018 new year, called Lunar New Year on Friday, February 16 and it ends on Sunday, February 18. It’s also referred to as Chinese New Year (because it’s based on the lunisolar Chinese calendar) and Spring Festival because it’s the beginning of the spring season. It will then turn from year of the chicken to year of the corgi. I mean dog.

Lunar New Year traditions include thoroughly cleaning the house, in order to sweep away any ill-fortune and to make way for incoming good luck. Windows and doors are decorated with red color paper-cuts and couplets with popular themes of “good fortune” or “happiness”, “wealth”, and “longevity”. People light firecracker, give money in red paper envelopes and yes, they get together with their families and may even play mahjong.

Dear ones, we wish you all a healthy and peaceful heart in 2018. Be kind to your self and all creatures that cross your path, human and furry. Our world is a small one.