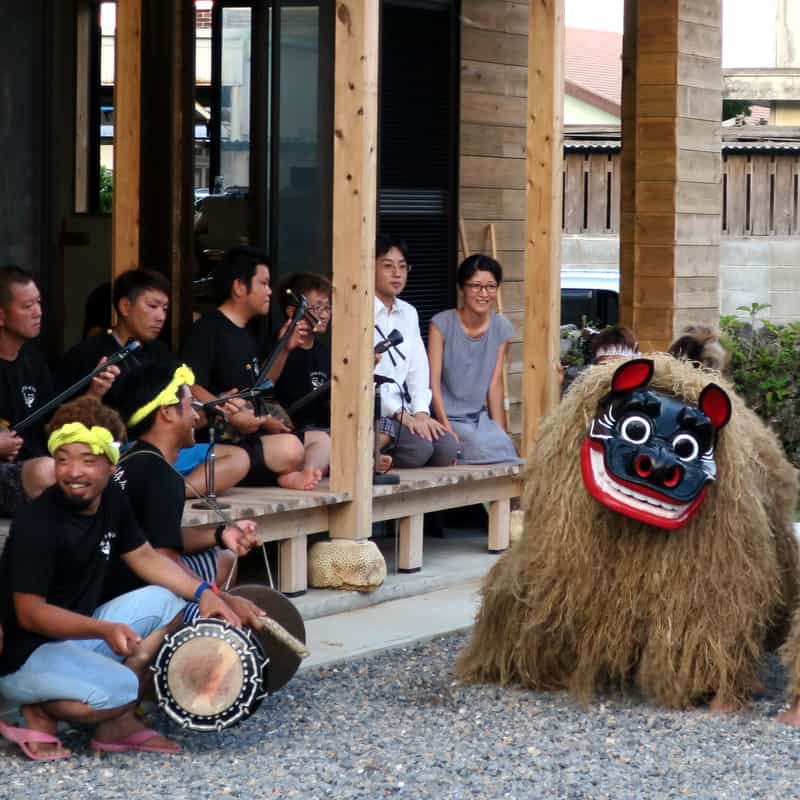 A different world, less than an hour away

Who knew that a 55 minute flight east from Taiwan could land you in the Hawaii of Japan? We didn’t know that Japan’s islands sprinkled so far south almost kissing Taiwan’s east coast. After visiting Penghu Island in July, also an hour flight, but west of Taiwan (and part of Taiwan) we were curious to explore more of the islands that surround us.

Ishigaki is where the Japanese go to escape dense city life. It’s 300 km away from the east coast of Taiwan. Ishigaki is part of the Yaeyama Islands, an archipelago in the southwest of Okinawa Prefecture, Japan, and covers 228 sq. miles. It blew us away with its beauty and wildlife. Hands down the best snorkeling and diving we’ve experienced. MANTA RAYS plus mountains, mangroves, fruit bats, coral reefs and shisha beasts. 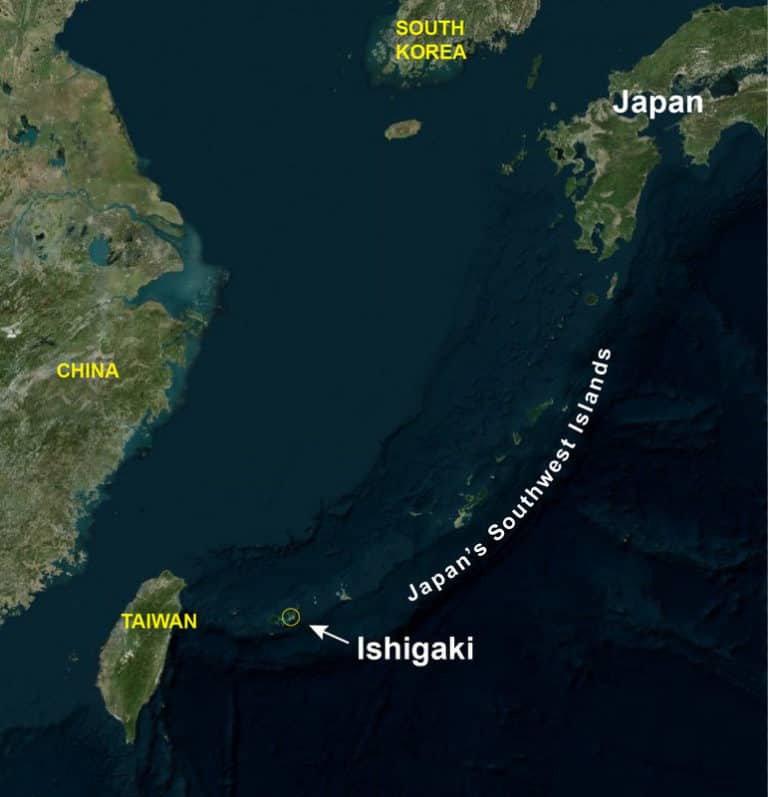 We didn’t know it, but we serendipitously booked our stay during the shishi festival. We fell in love with the energy and sounds of this celebration. This is a neighborhood affair (but celebrated throughout Asia for various reasons). It involves shisa beast dances often performed to folk songs played with the sanshin. The dance is commonly performed to bring good luck and drive away evil spirits. The shisa may bite people on the head to bring good luck too!

Shisa = an artifact that looks part dog, part lion, often seen in pairs. One with the open mouth traditionally wards off evil spirits, and the closed mouth keeps good spirits in. Almost every town, shop, home has a pair of ceramic shisa lions at their entrance or on the rooftop to guard and protect.

Sanshin = often likened to a banjo, it consists of a snakeskin-covered body, neck and three strings.

YOU DON’T SCARE ME

Shishi festival occurred 5 of the 7 nights we were there. At sunset you would hear the sanshin music fill the air and locals would leave their homes to follow the music to someones home, the host. The celebration moves from house to house for a couple hours. Children scurry in first to claim front row seats in the yard or wherever space permits with hopes of a close encounter with the shisa beasts.

Children would yell “ahl-oh-whet” (you don’t scare me) to the shisa. The lucky one would get their head engulfed by the shisa. Parents offer their newborn babies to the shisa for a lifetime of good luck by letting their baby “ride” the shisa or by letting the shisa “eat” the baby’s head. How about that for a rite of passage?

This short video captures the unique sights and sounds of the festival and island. 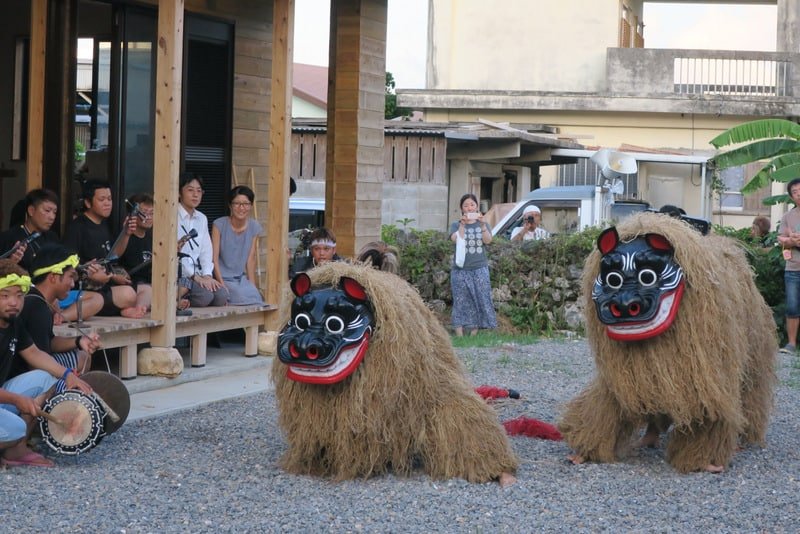 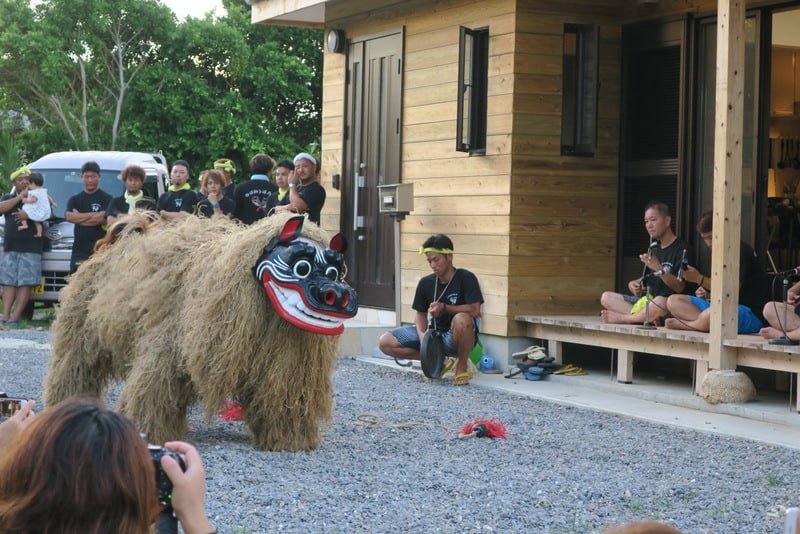 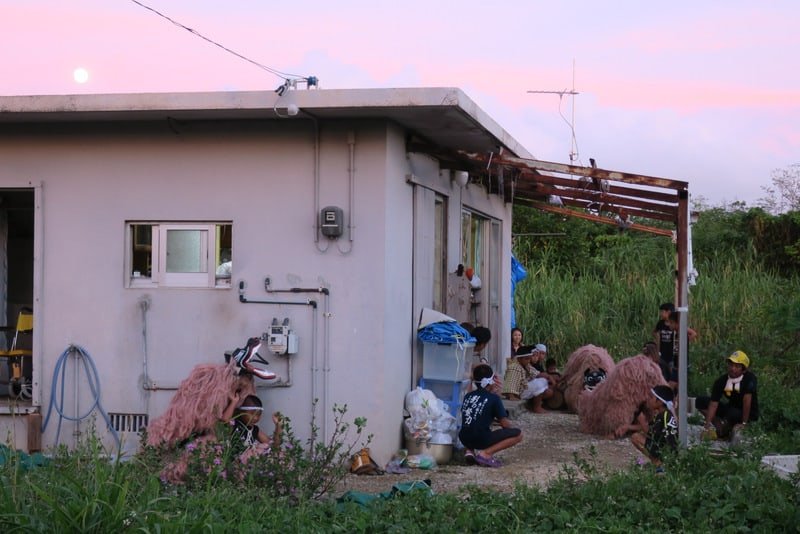 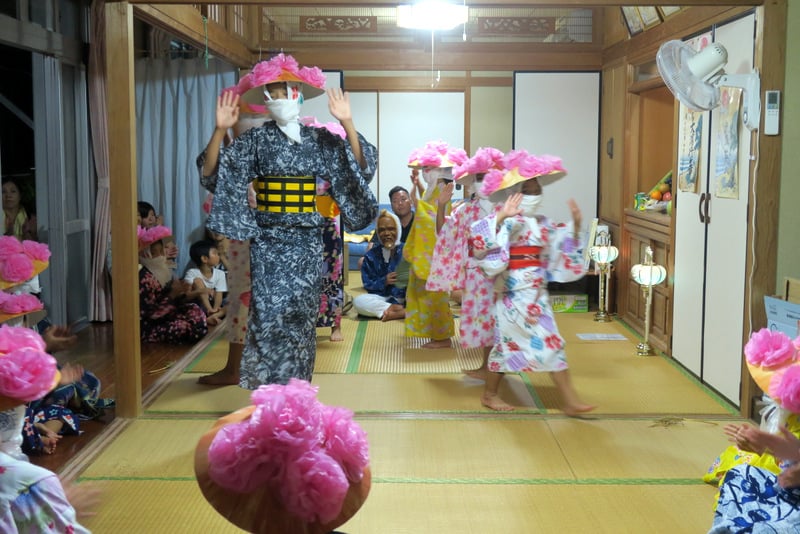 We stayed in a small village on the south east side of the island in a 100+ year old Japanese home called Le Lotus Bleu. The house has a rich history as it was originally built in the Hida Takayama area in Gifu prefecture. The architecture is typical from 19th century houses of Hida, not Ishigaki. The home was dismantled years ago by its wealthy owner and rebuilt piece by piece on Ishigaki. This owner was a costume and kimono maker and lover of theater so he built a small theater house on the property. After he passed away the home fell into disrepair and none of his children wanted it.  Maiko and her husband purchased it after it sat on the market for years, then renovated it over three years. They and their two children live in the “theater” house and they offer six traditional tatami mat rooms for guests in the main house. It’s a one-of-a-kind stay in this little village.

We took a short ferry to Taketomi Island which is west of Ishigaki. It was a scorcher of day so we biked in very sexy full cover-ups in search of shade, cold beer and star-shaped sand. You may enjoy knowing that my rental bike was called the Captain Stag and Pickles’ was the Misty Light. Felt right.

Picked up these Subea masks at Decathlon for about $30 USD. Absolutely worth every penny. The snorkeling at Yonehara Beach was hands down our favorite… ever. It was like swimming in one of those gorgeous fancy aquariums with the most colorful fish and coral you can possibly imagine. 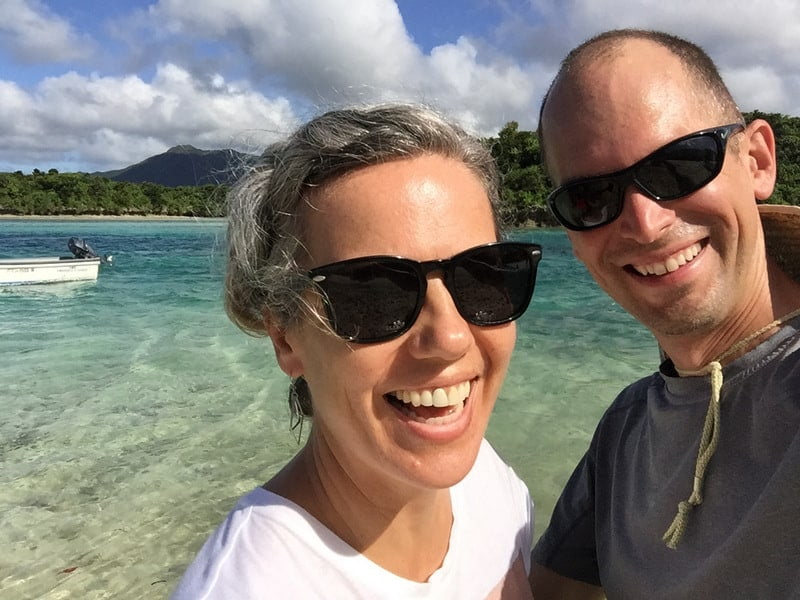 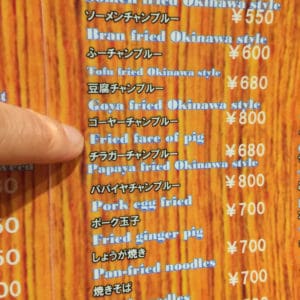 We did three dives with Prime Scuba (highly recommend them): Sakieda Big Arch (18 m), Kabira Manta City (12 m) and Yonana Channel (28 m). Amazing. Why don’t we do this more often? 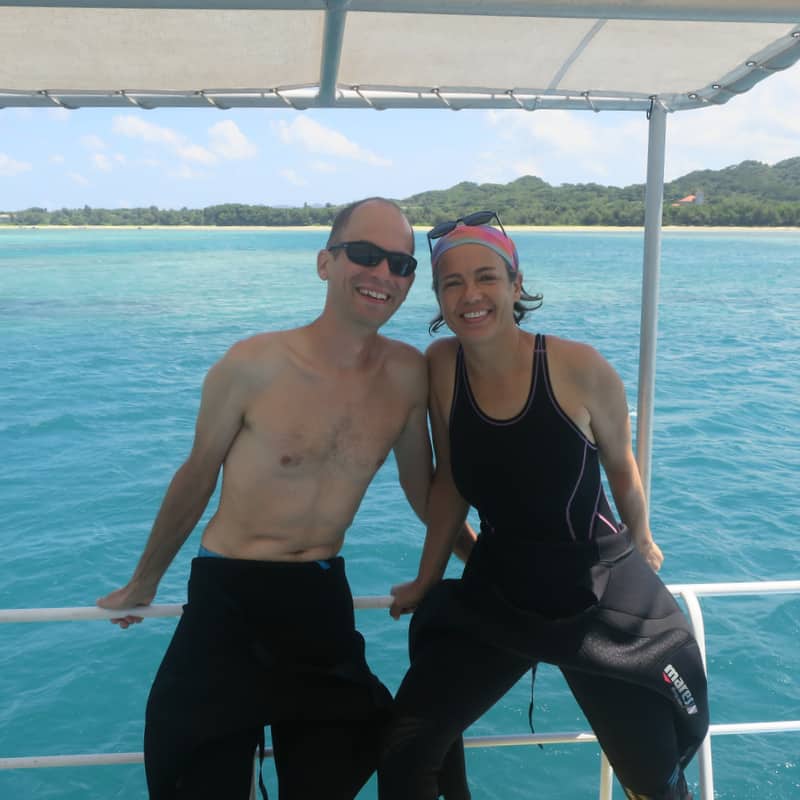 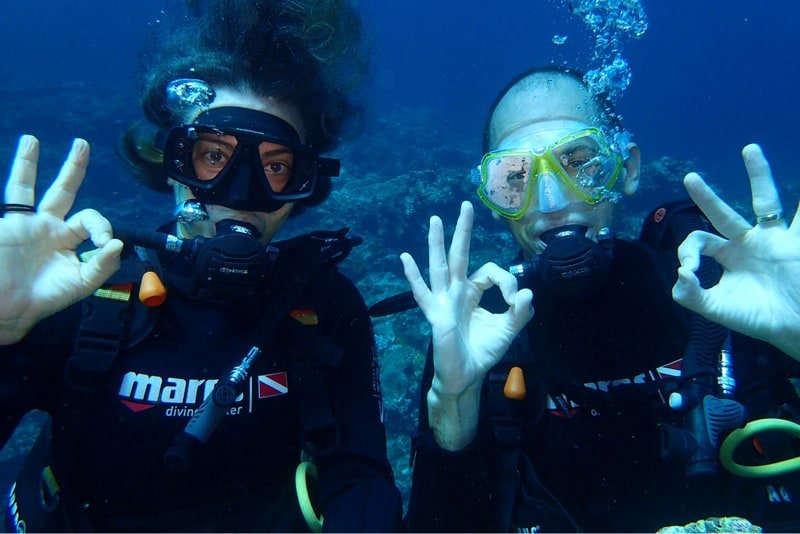 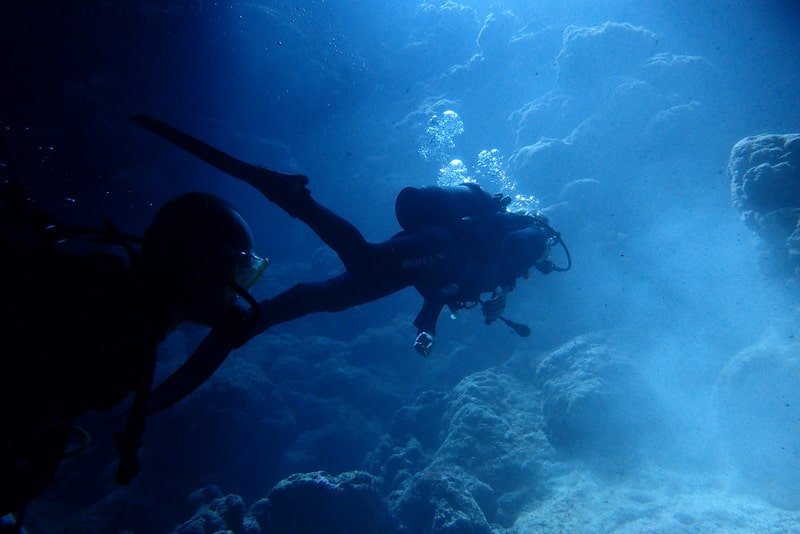 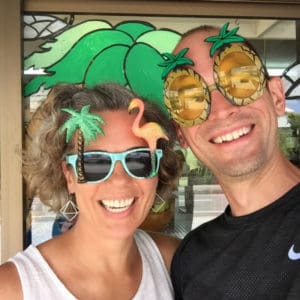