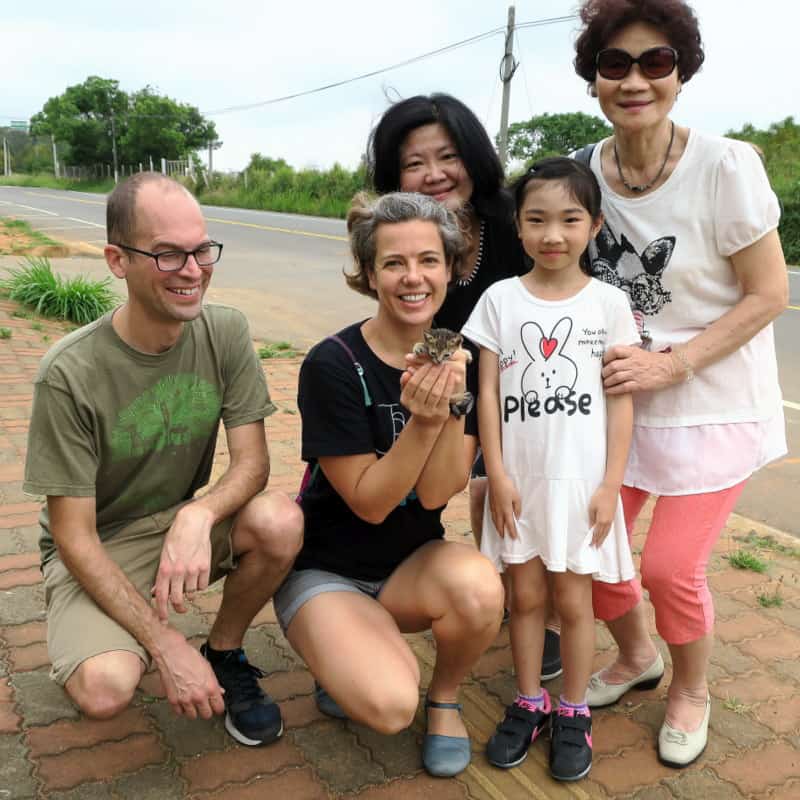 So much serendipity happens to us in Taiwan that it doesn’t surprise me that this happened. I like to call these the “magical Taiwanese moments”.

First off. I’ve been quite home-friend-family-corgi-cat sick in the past month. It’s strange that it kicked in after living here a year and half, but it did. I still love living here, but homesick happens. And then stuff like this happens and everything feels right in the world. 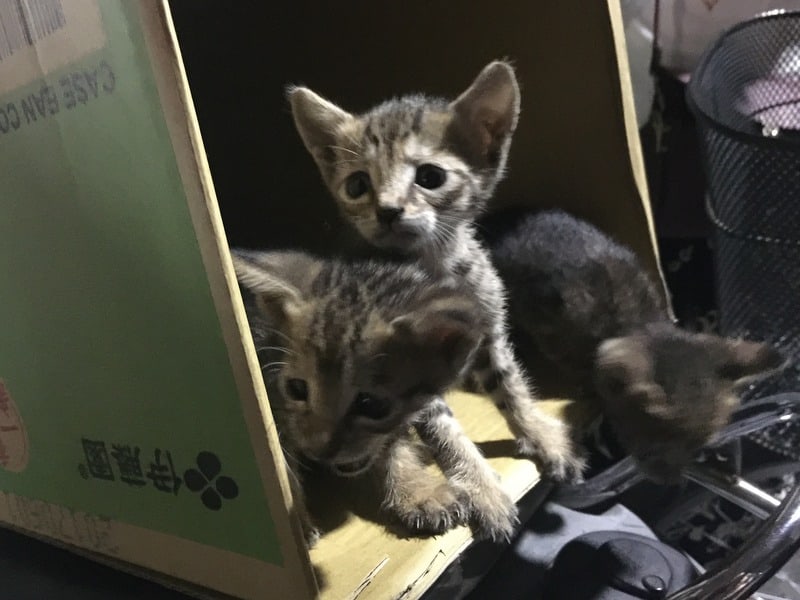 Heading home after an 8 pm night cap, because that’s how we roll, we come across loud mewing, from above. Lo and behold… two kittens on a roof!

The third had already jumped.

Kitty jumper survived. It was being held by a young woman named Xing Wei. She and another woman, Thalia (who speaks fluent English, from Canada), were also walking by and assessing the situation. I thought mama cat may be out looking for food, but locals told us mama had not been seen for awhile. It’s assumed they are feral as Taiwan has a lot of feral cats and even more feral dogs.

We decided to rescue them off the roof as they were (A) starving, (B) likely going to jump and then (C) hit by a car. Pickles being the tallest stood on a chair and brought the other two kitties to safety. 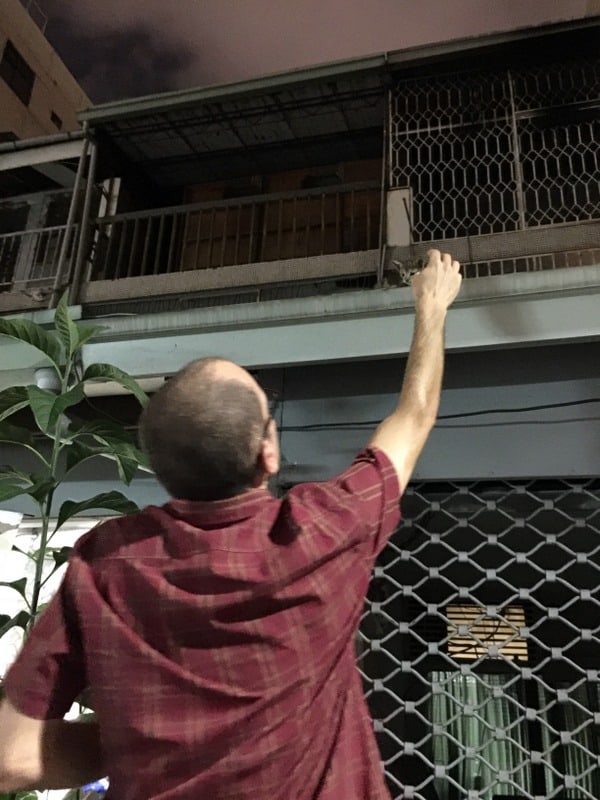 Kitties in a Basket 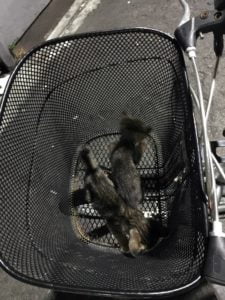 Between Xing Wei, Thalia and us we decided we had the most space to foster the triplets for a night. YAH! We agreed to meet the following day at 10:00 am to take them to a shelter. Until then they pimped out in our spare shower. 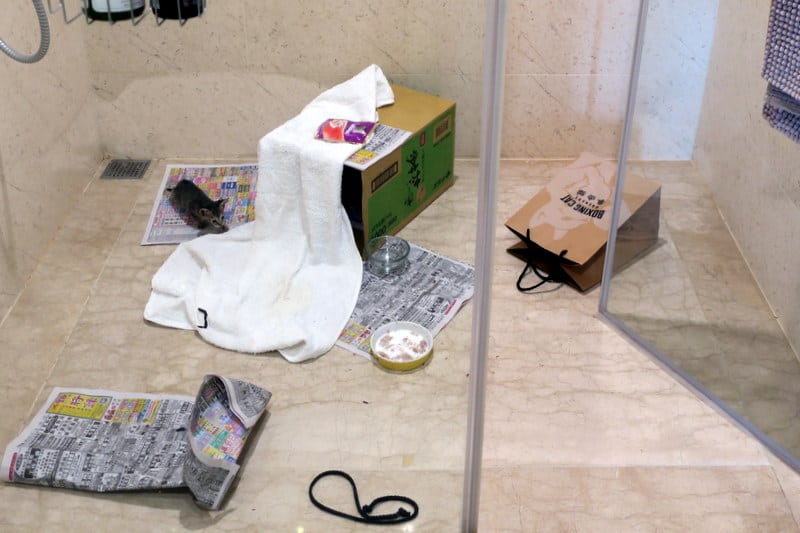 They were SUPER hungry!

I photographed the heck out these love bugs and attempted to find them homes via Facebook. No dice. 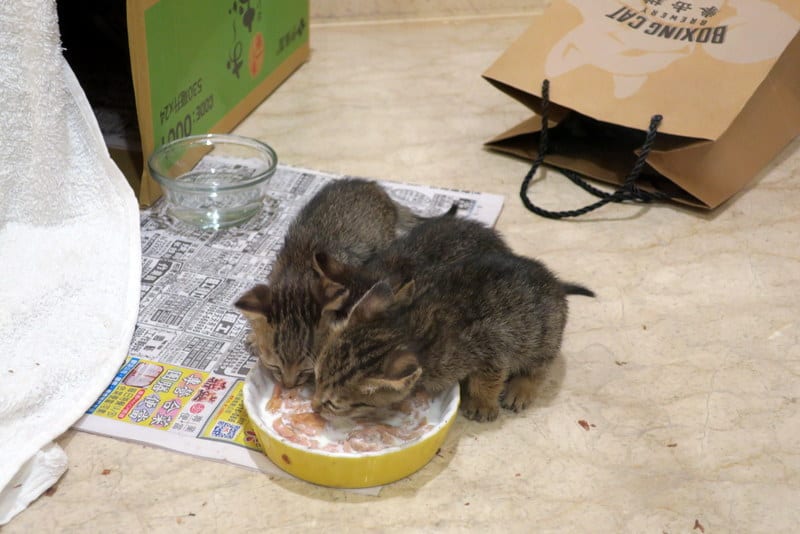 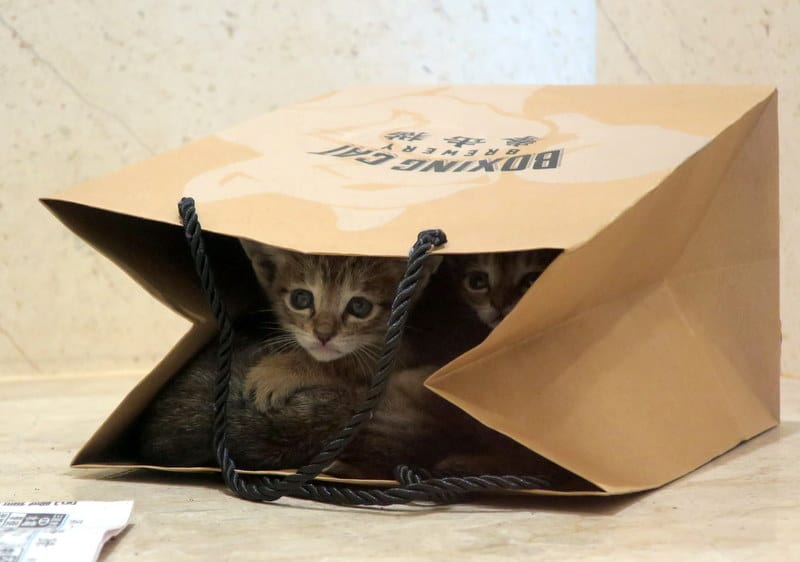 The next day, we reluctantly went to Taichung Animal Shelter in Nantun, a government run shelter. Below is Xing Wei and Thalia. 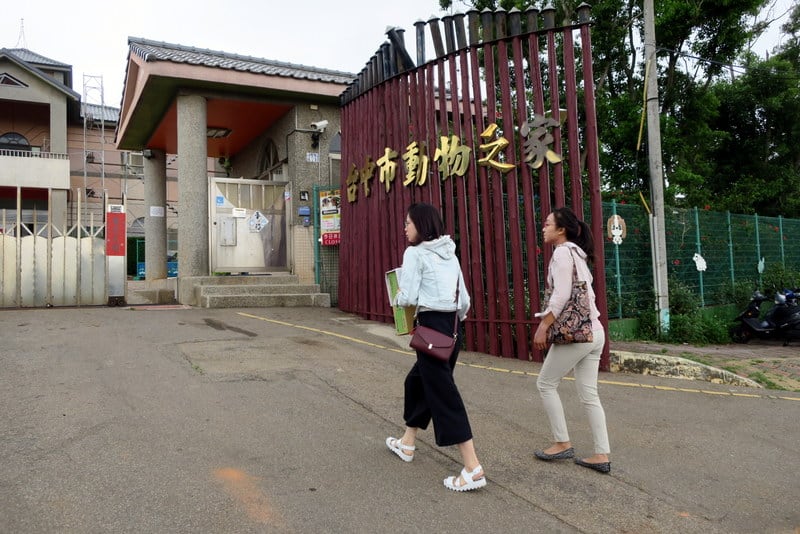 All shelters tug at the heart strings

They’re all a bit rough around the edges, in need of funds and always short on human help. Xing Wei filled out the paper work to surrender them. If not adopted in 12 days, they are put down. This shelter is about 30 minutes out of town. It seemed rather remote and we wondered how many people actually come out here. 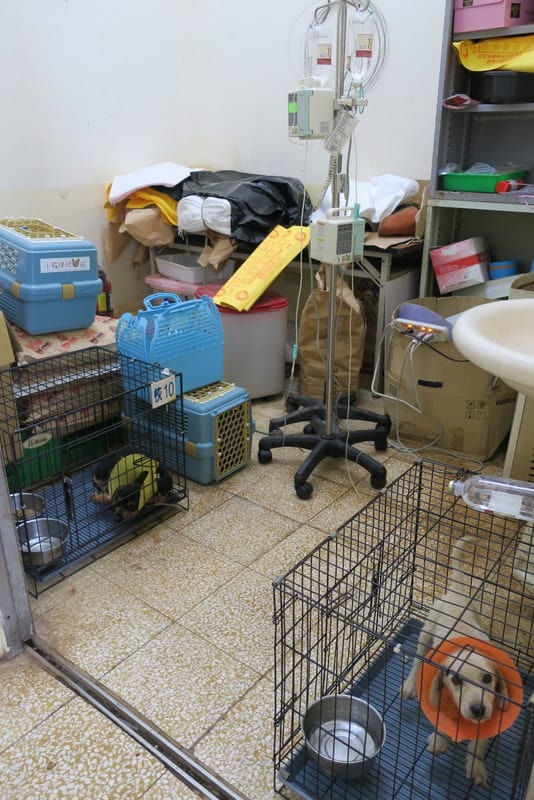 We officially surrender them and walk away, slowly. Their fate seemed unknown and the place didn’t leave us feeling hopeful. 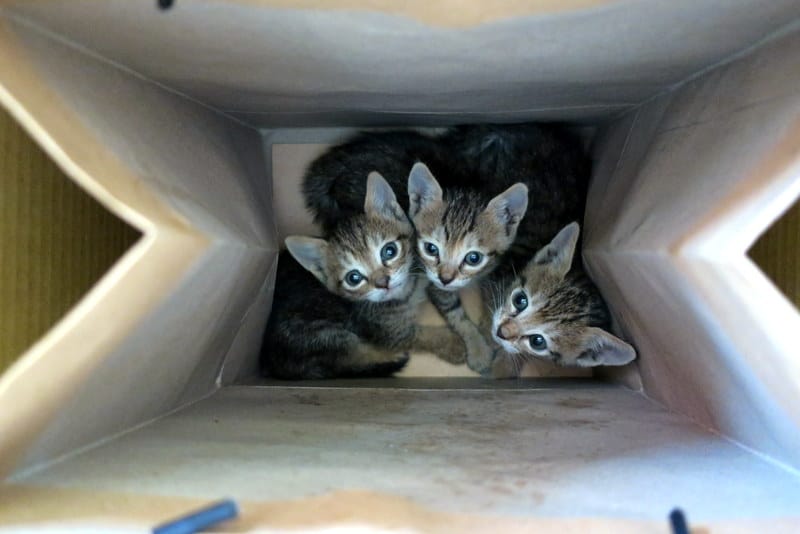 As we’re walking away, feeling a bit weepy, we see this family carrying the best clue, AN EMPTY KITTY CARRIER! They came for business. I approach them and explain in broken Mandarin we have 3 kittens… which were in the “back” and not available for anyone to see yet. Oddly, the shelter had no kittens for adoption. We learned they are taken somewhere else which is another story. Thalia and I give this family the pitch while Xing Wei runs back to re-rescue the kittens out of the shelter. Because if you’ve ever worked in a shelter, you know… kittens really do sell themselves.

And they did. This family adopted one, right there on the street. One down, two to go. 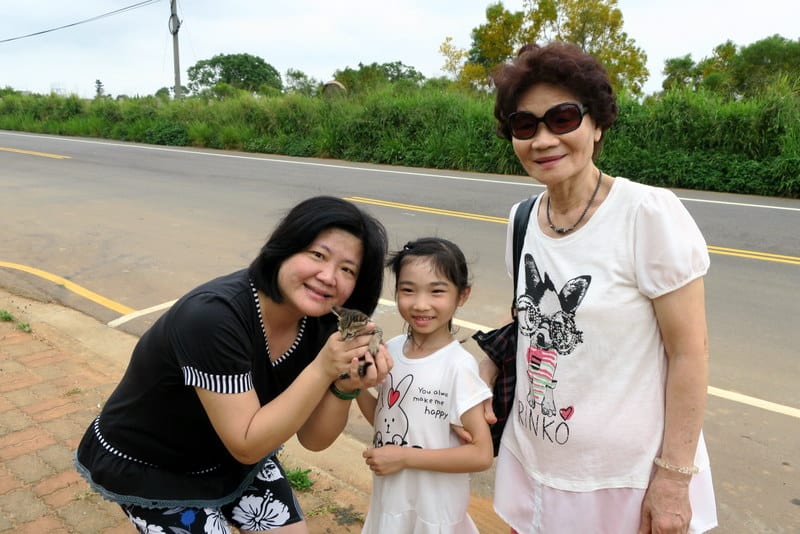 Camp out in front of shelter. Approach every person that shows up. Let the kitty magic happen. 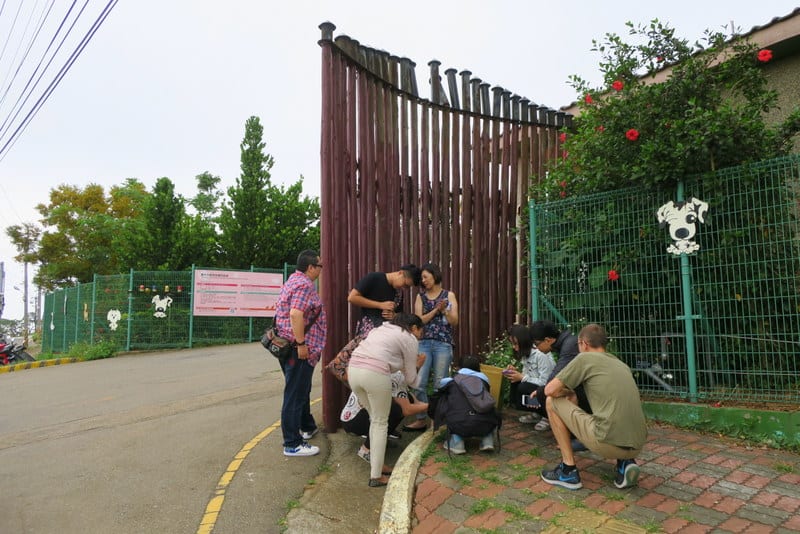 This sweet young couple came looking for a cat. She spent time bonding with this one and was hooked. 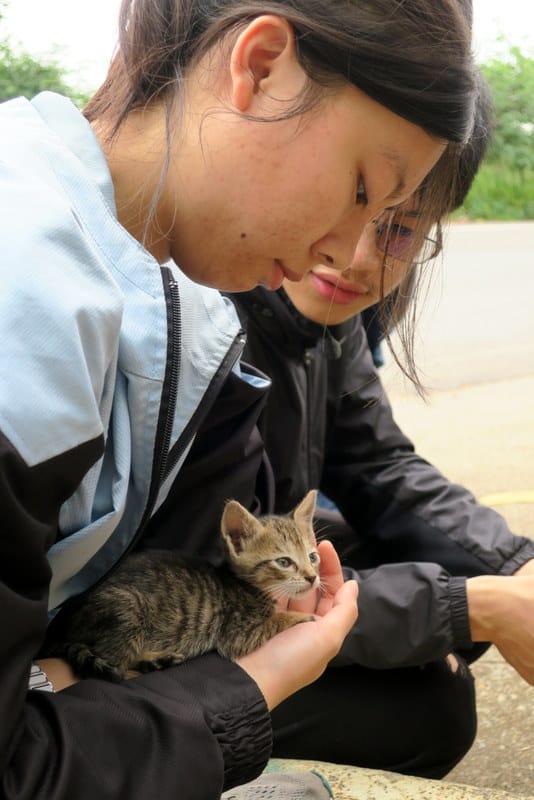 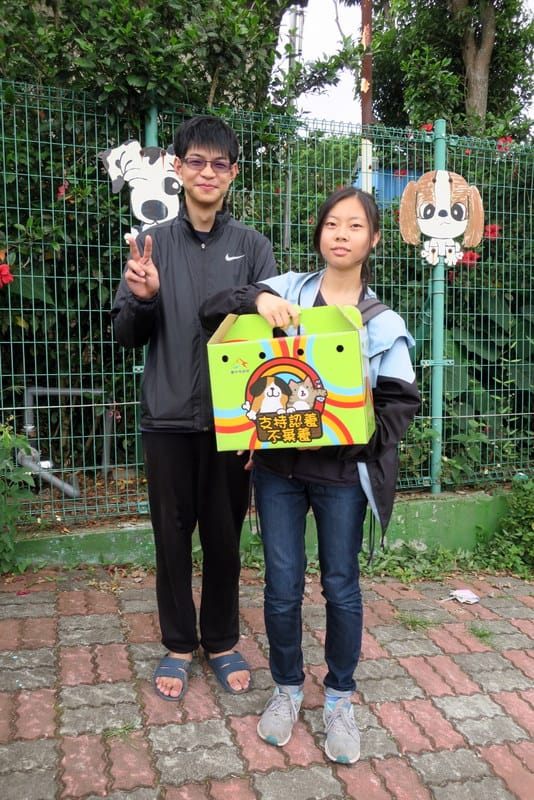 A mother and her son fell for this one! 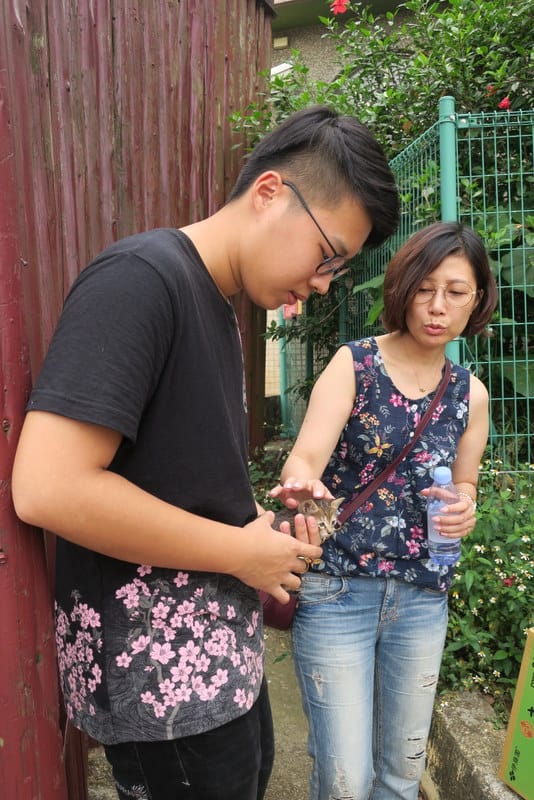 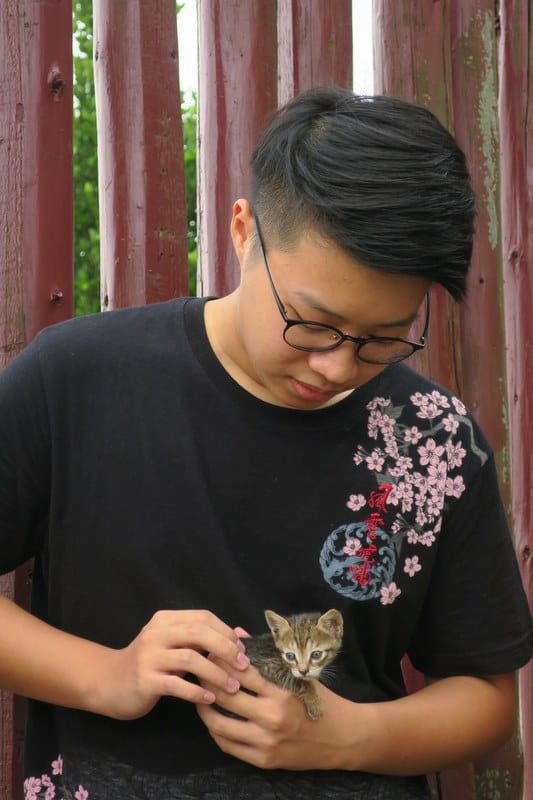 Within 2 hours the Rogue Kitty Operators found homes for all three kittens!

And here we all are (minus the first adoptive family): Me, Pickles, Adoptive Family #2, Adoptive Family #3 (4 total), Thalia (white pants) and Xing Wei (black pants). The other layer of serendipity is that Thalia and I have a lot in common so I gained a new friendship from this experience. Thalia connected us on a text-message group so we can all stay in touch and get kitty updates. Taiwan… I love you. 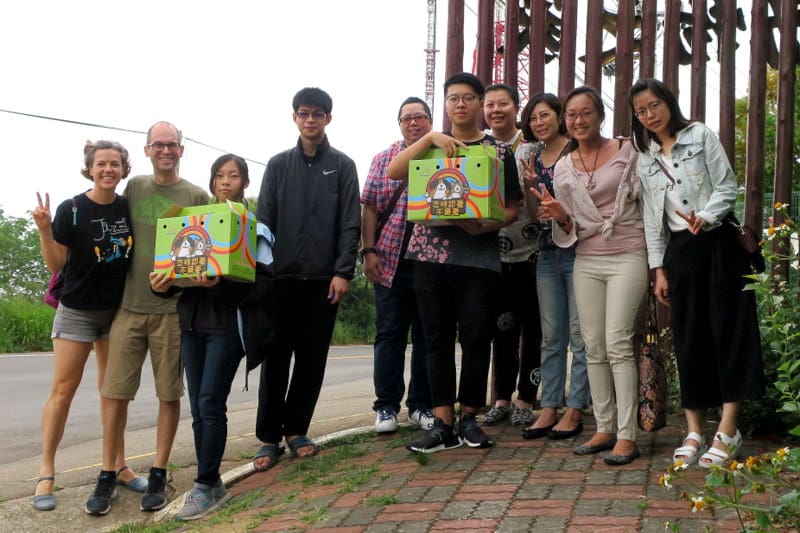 Now… I just need to stumble upon some stray corgis.

Finger hearts and mews to the good spirit that surrounds us! We are feeling grateful today. I leave you with this very important message because shelters around the world are filled with perfectly adoptable animals so please,

P.S. Last year I volunteered with Taiwan Guide Dog Association. I had a hoped to work with the seeing impaired humans, but I was more of the dog groomer and paper shuffler, which was nice for a bit, but these dogs are not in need per se. All in time… I’ll find my thang here… or just keep rescuing kittens from rooftops.