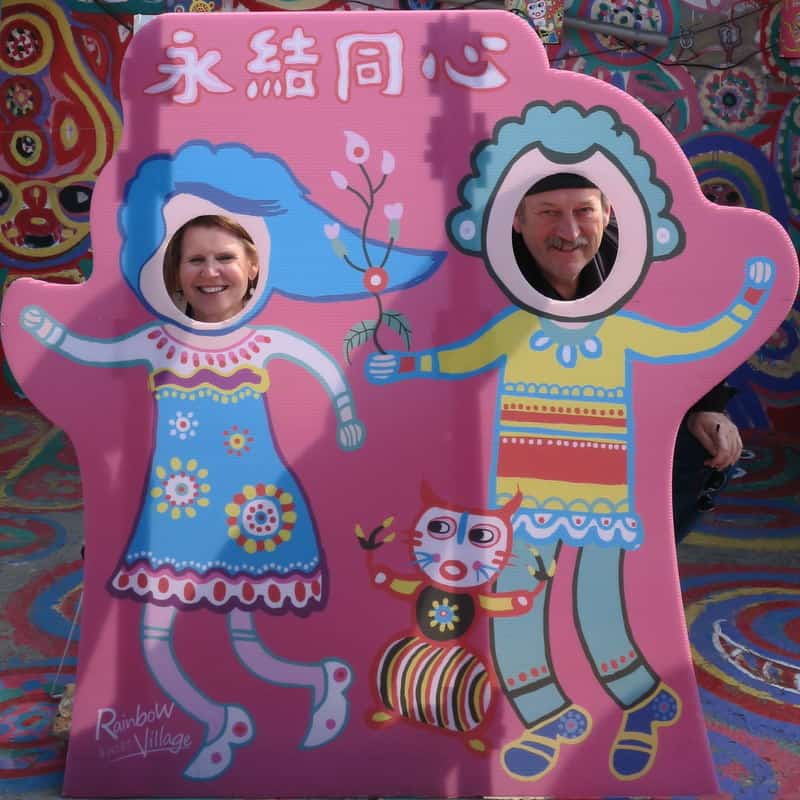 Look who showed up in the ‘Chung…

Kathy and Jerry Berggren from Lincoln, Nebraska! AKA my favorite in-laws.

Note the puffer coats! These two brought the Nebraskan weather – low 60s! Our thin-blooded Taiwanese internal thermometers can’t handle such temps. We are getting really soft over here, people. We had such a fun time as these two were up for doing and eating anything… so that’s what we did! 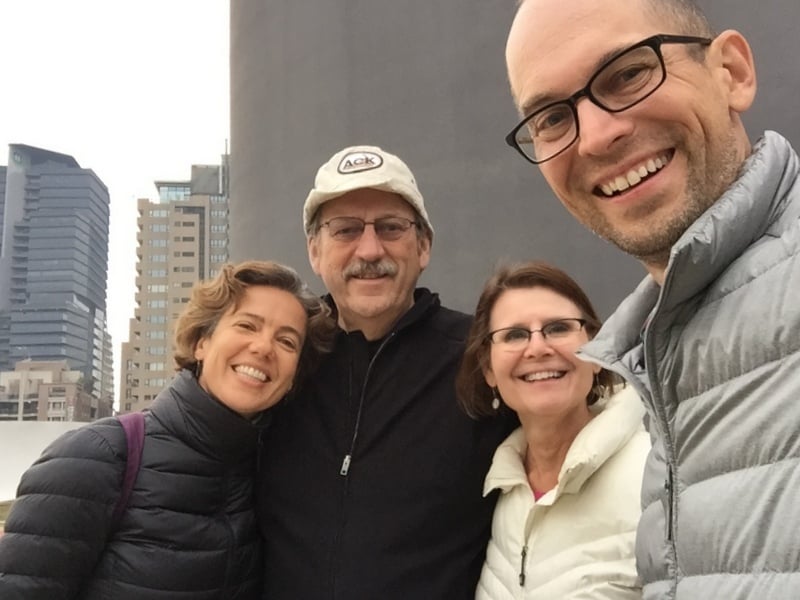 Kathy mastered chop sticks… for a brief while 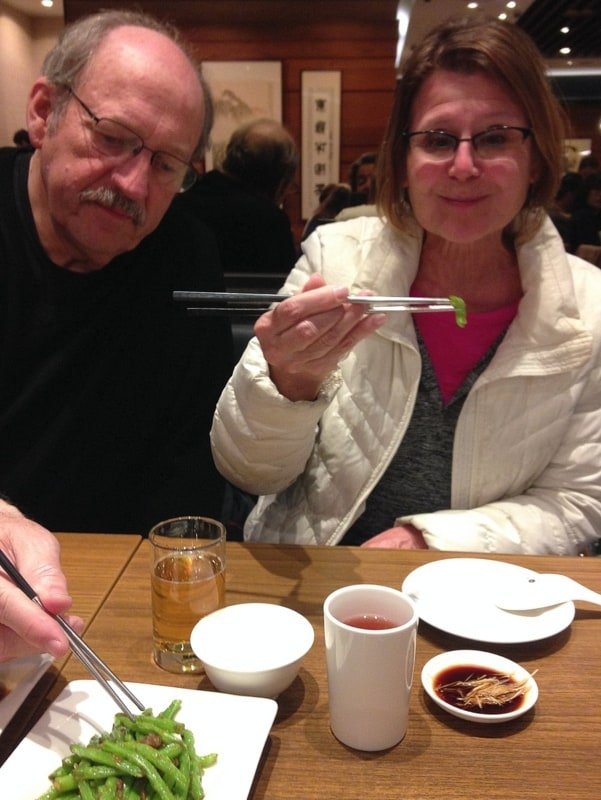 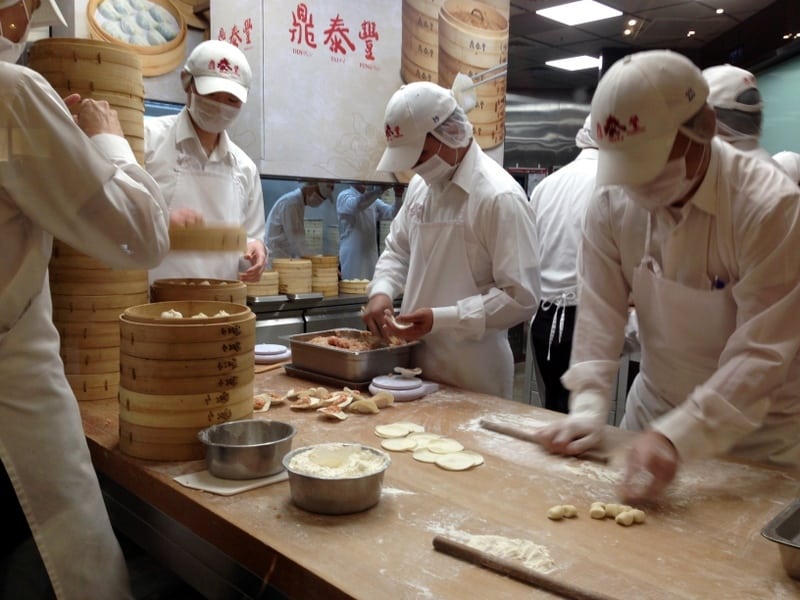 HAPPY HOUR at the TAICHUNG THEATER 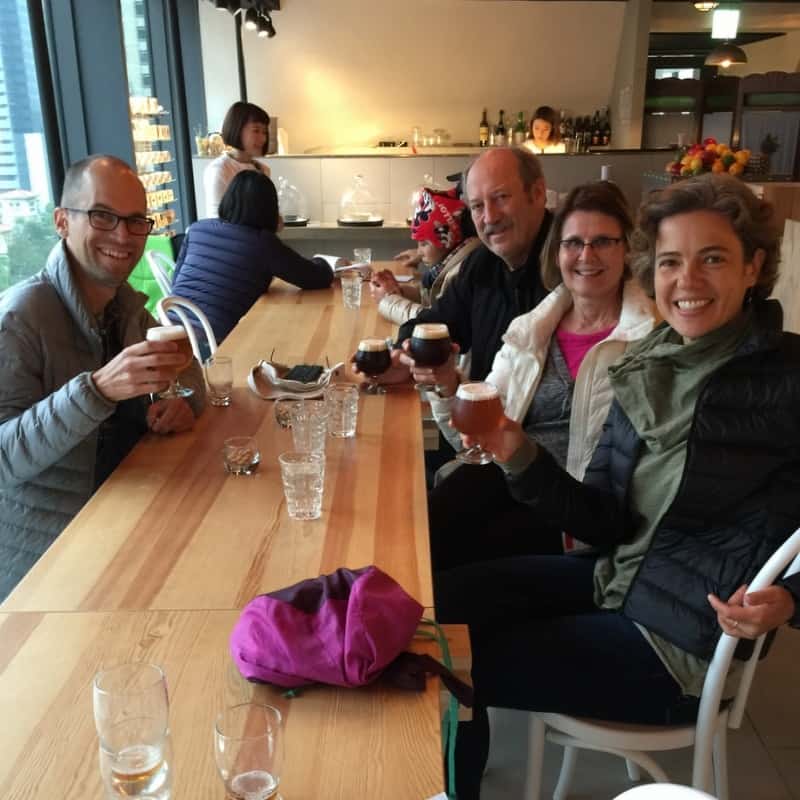 My friends, Kinuko and Sandy (who I play – I mean ferociously compete with in Mahjong with every month) took us to the fish market. Basically you walk around, buy what looks good, (we each picked 1 or 2 fish). Then, you take your fish to one of the restaurants next to the market and they cook it up as you wish. Thankfully, Sandy knew which one was the best because they’re all vying for your business, waving and calling via mega phones,”Eat here, eat here!” It’s a bit intense. 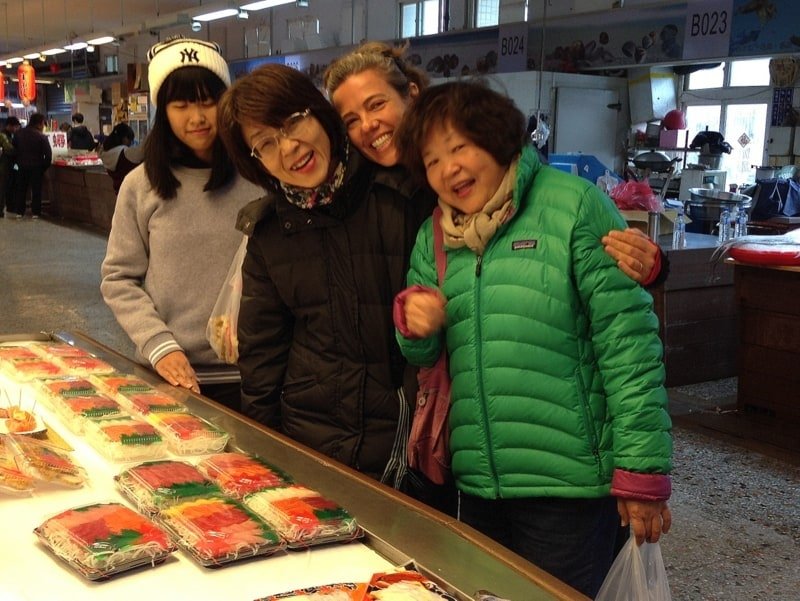 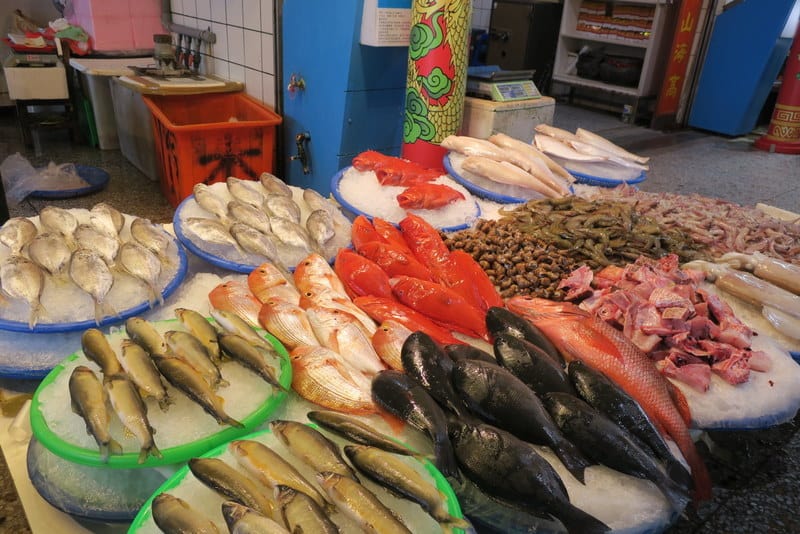 Explaining how we want our fish prepared

Jerry got in trouble taking photos of the kitchen crew. They thought he was a spy and would steal their secrets. Now we know they have secrets! 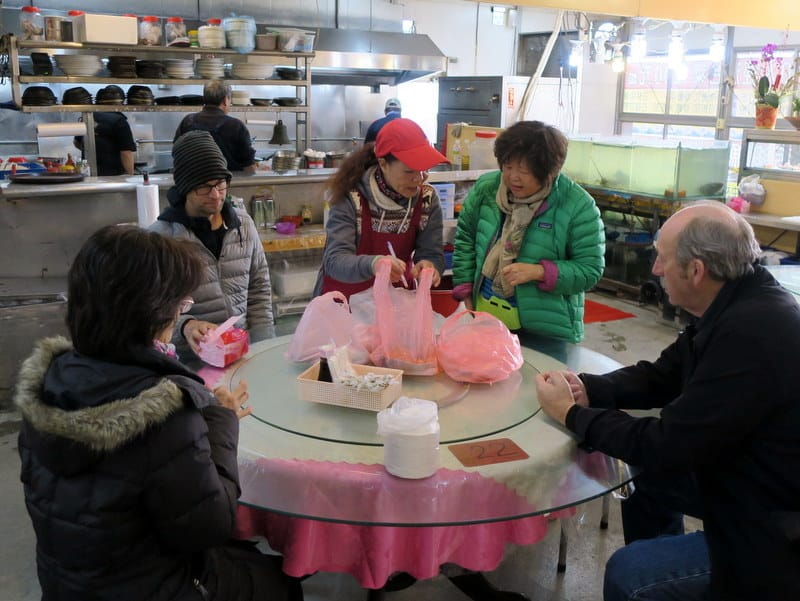 We’ve been here a couple times and every time it’s a different and fun experience. This time the whole place was under construction, getting a much needed new roof. But alas, Mr. Rainbow was still there, signing art and posing with his fans, us. We also learned what his signature finger pose is all about (he did this when we were there with Aki & Kani, but I thought it was a “show me the money” sign).

Fingers Hearts is a gesture created by crossing the thumb and index finger. It means you are sending love! 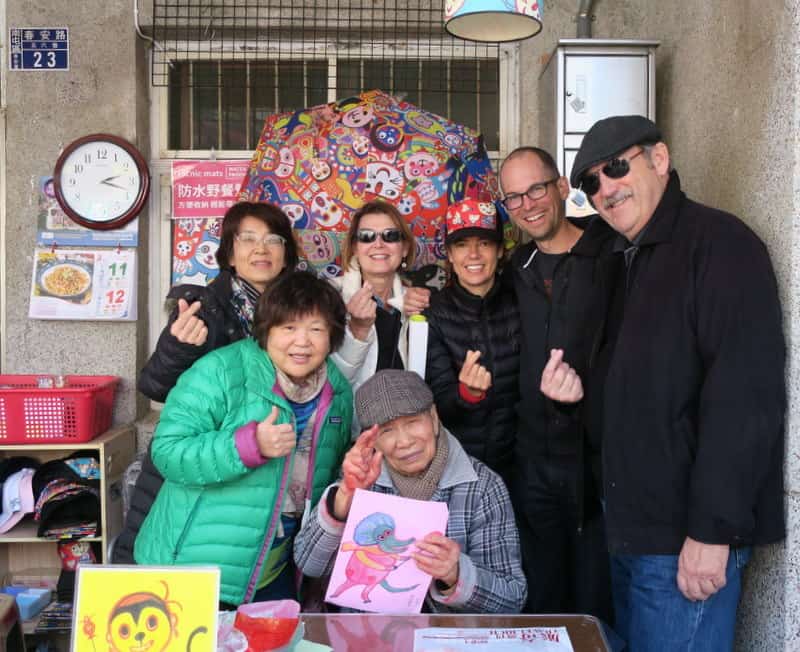 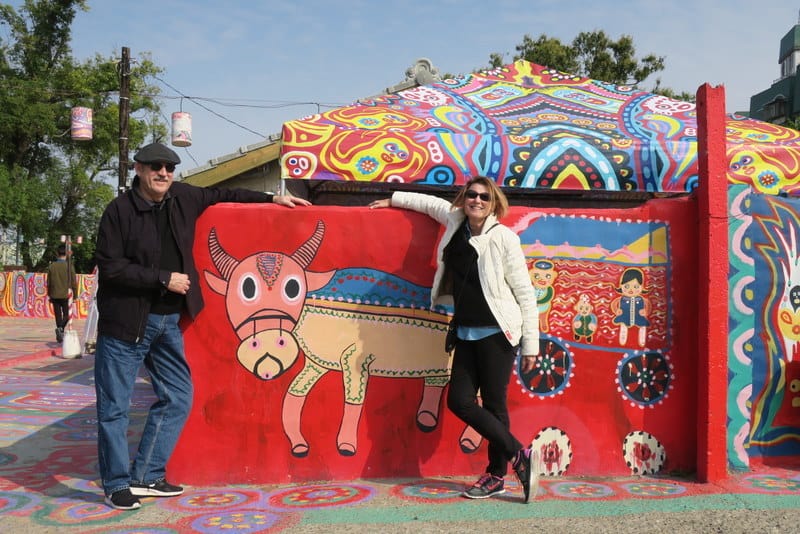 SO MUCH LOVE HERE 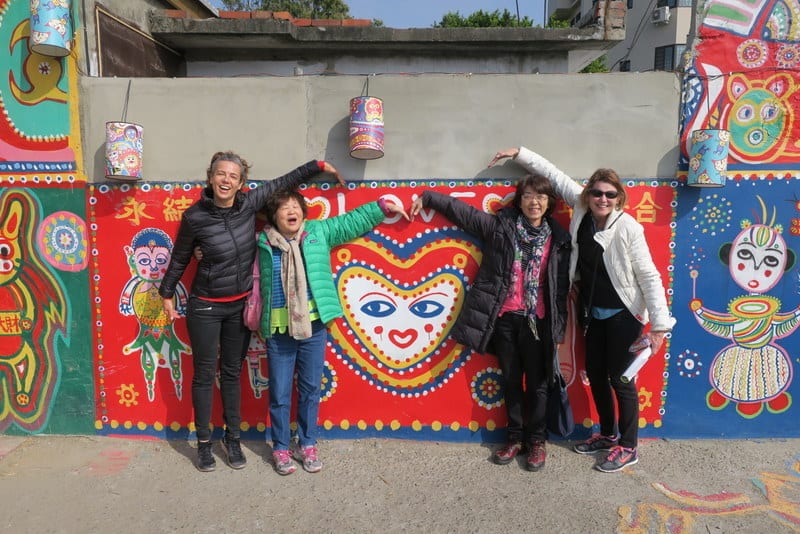 While we’re on that theme… 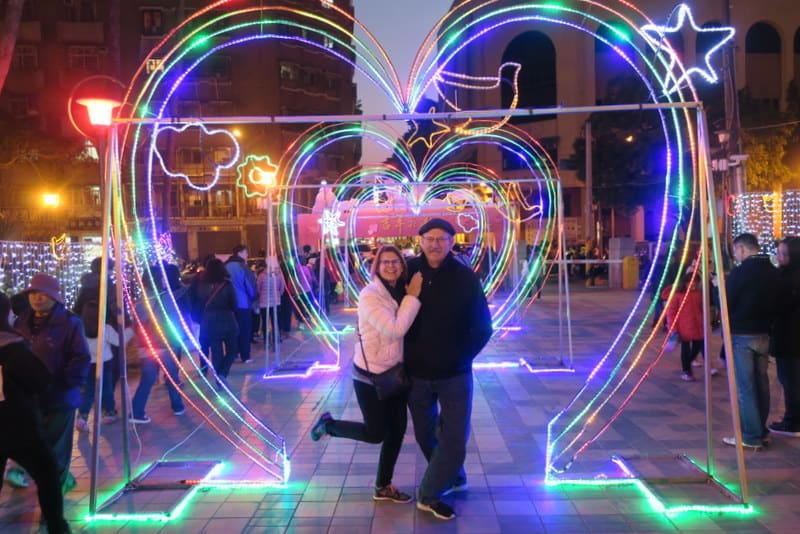 It’s important to stretch the core to make room for more dumplings. Hey, Kathy’s a physical therapist, she knows best. 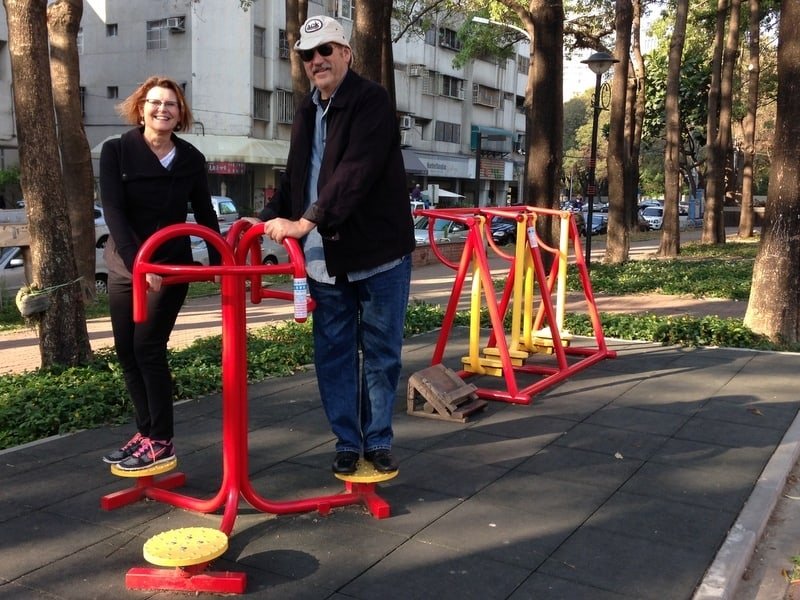 In Search of Tango

And all we found was The Tango hotel. My father in-law is a tango dancer, a good one too! We searched for tango dancing, but alas, the only dancing we found was a morning exercise group doing American tango and other Ballroom dances. If you’re ever in Nebraska, look this feller up because he’s been dancing Tango in the Great Plains and around the world since 2007. 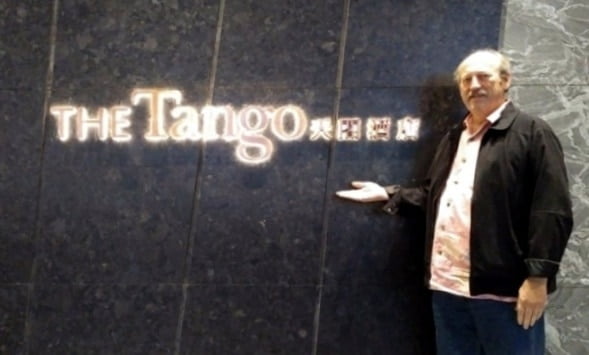 These never get old. If you visit us, we’ll take you once, twice or three times. 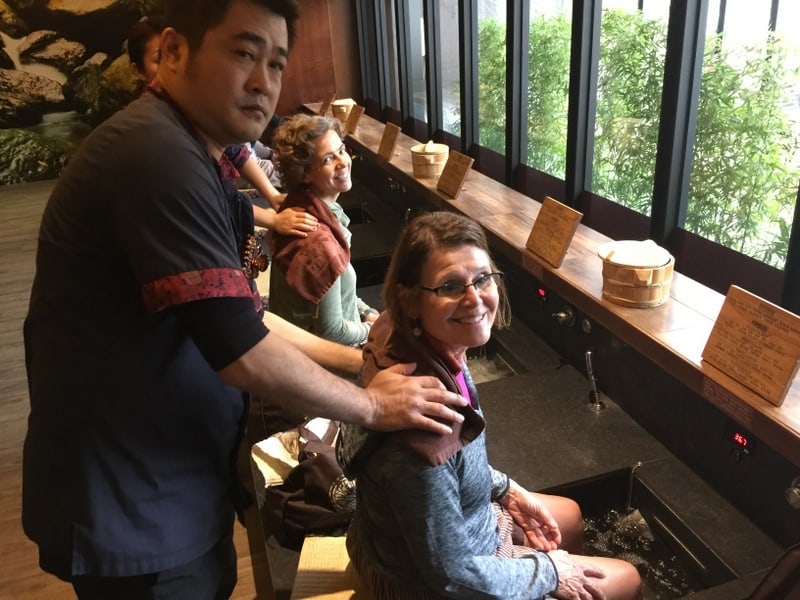 We rented hybrid bikes (electric assist for a little oompf) and circumnavigated Sun Moon Lake – 30 K yo! I’m not going to lie, electric assist is FUN! We did experience a small glitch, when my bike decided to turn into a wild stalin during a pit stop for lunch. It took all my strength to hold it (in a wheelie position) to prevent it from crashing through the market stalls. A local guy helped me calm down the beast. It was a mortifying experience. Now it’s quite funny. Sorry, the family was frozen in disbelief to reach for their cameras so no photos. 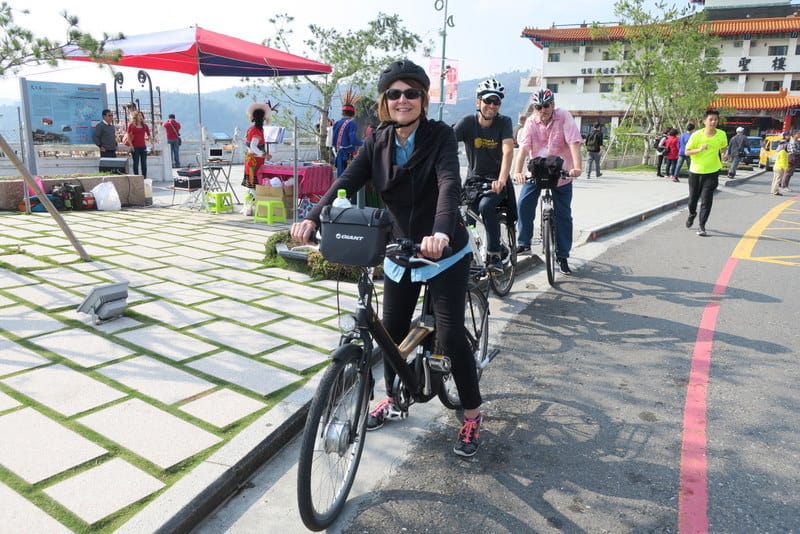 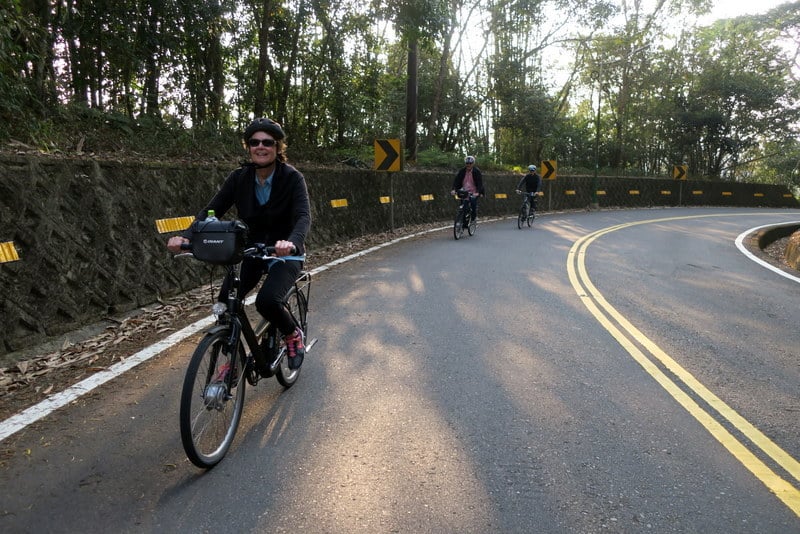 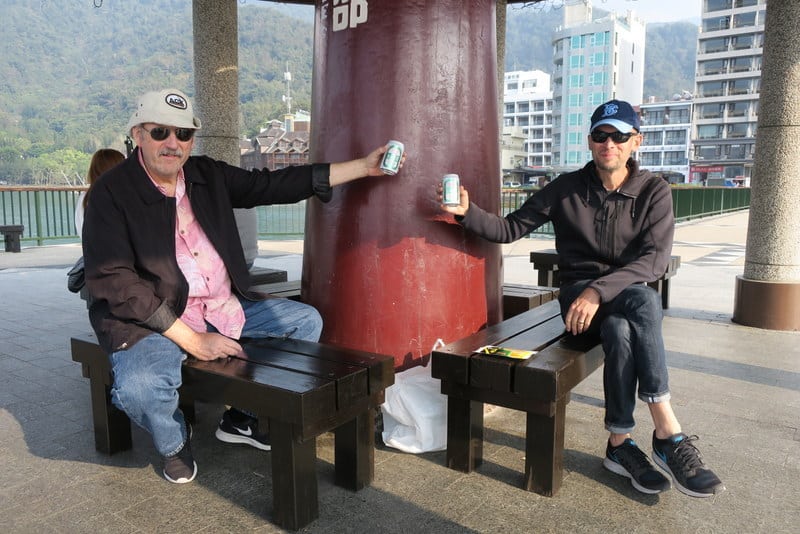 Temple pit stop and these two keep their helmets on, which was a good thing. 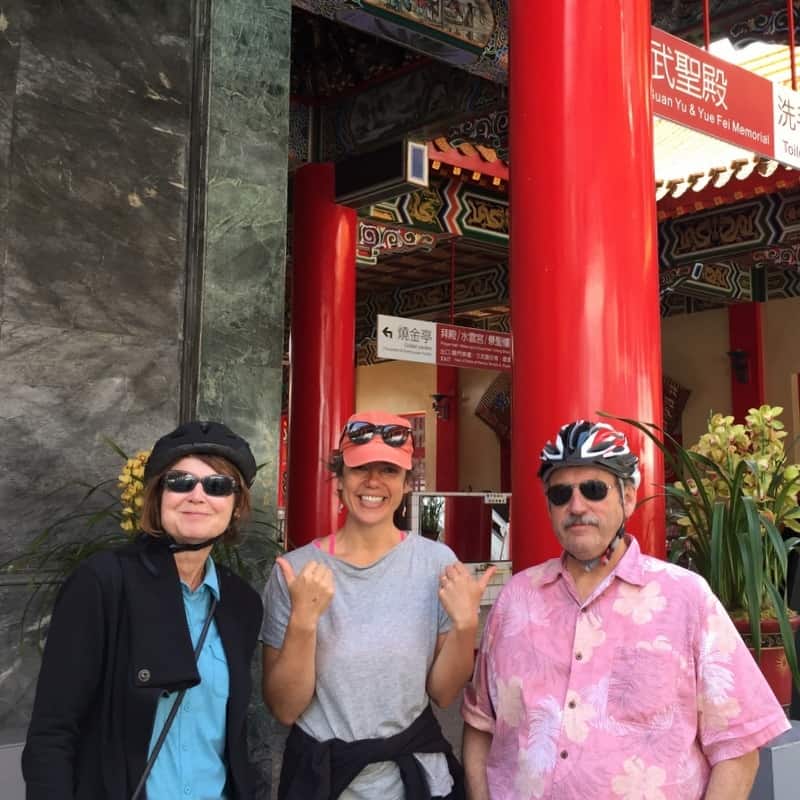 SO OFFICIAL IT HURTS 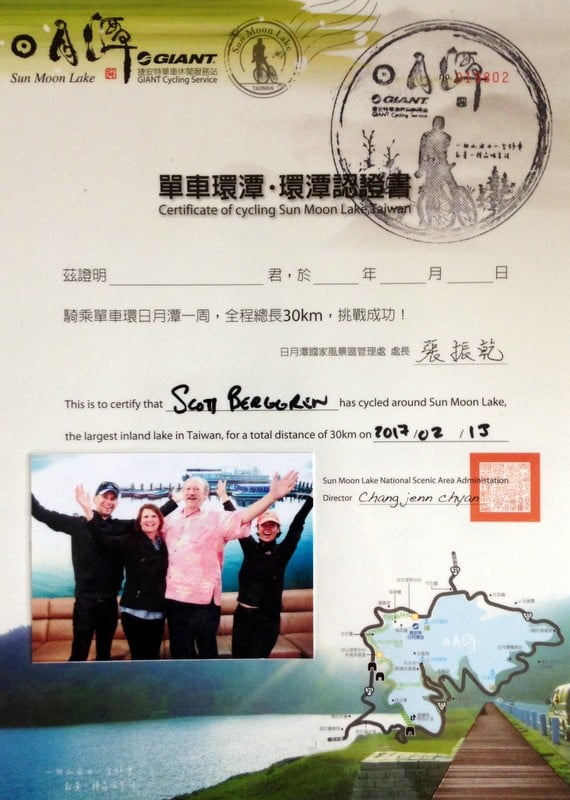 DAY TRIP TO TAIPEI, THE CAPITAL

We had to take the architect in the family to see the Taipei 101 building. We also took them to see the Earthquake Museum because when you specialize in historic preservation that’s juicy stuff. Berggren Architects

Taipei 101 is the tallest building in Taiwan. It was the world’s tallest building until 2009 when Dubai beat us with just a taller spire. What a cheater move! Taipei 101 still has the largest damper sphere in the world and it’s one of the most stable buildings ever constructed which is incredible when you consider it’s located just 660 feet away from a major fault line and gale winds reach 134 mph during typhoons. Source: wiki

But it is because it has a big ball – 18 feet in diameter, yo! It’s a gigantic suspended tuned mass damper or basically a big hanging ball. It takes up four stories and sways to offset movements in the building caused by strong gusts. If you visit us, we’ll show you our big ball. It’s cool. Almost as cool as Pickles’ soccer balls. 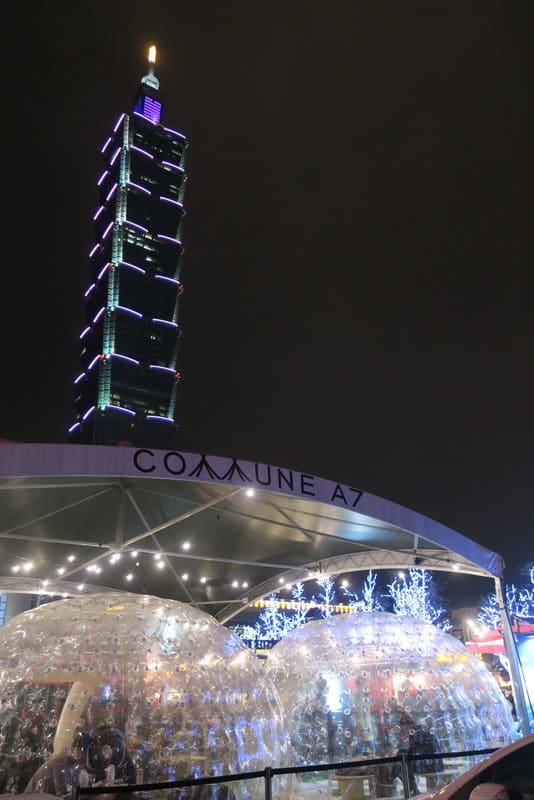 We got lucky at the 101 because it was the first time the outside observation deck was open! It’s usually too windy up there. 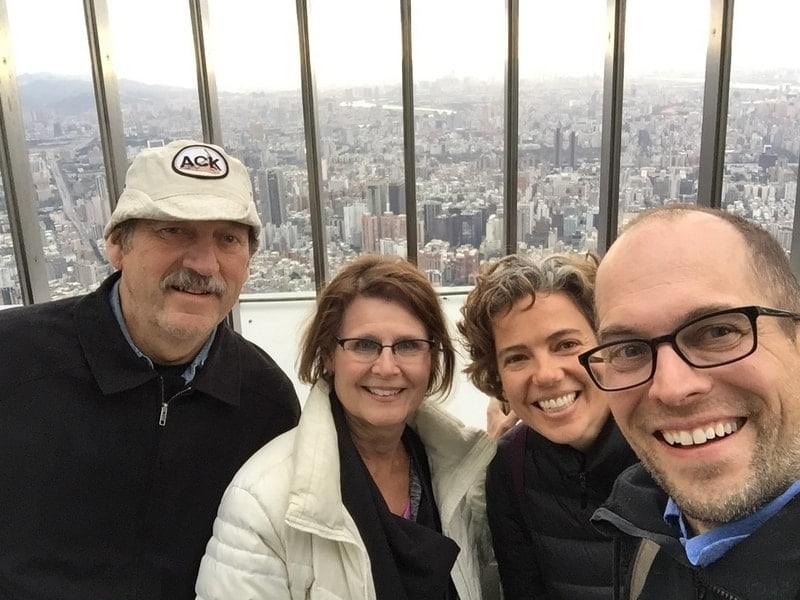 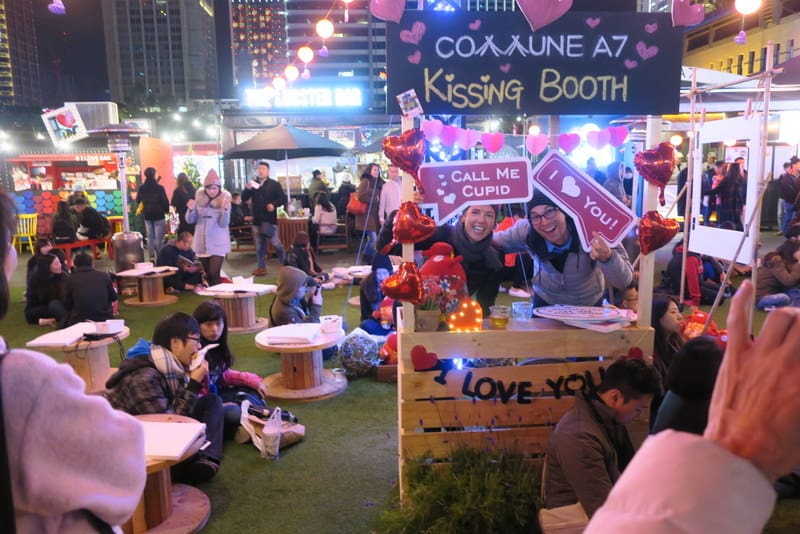 Taihu Brew in an Airstream 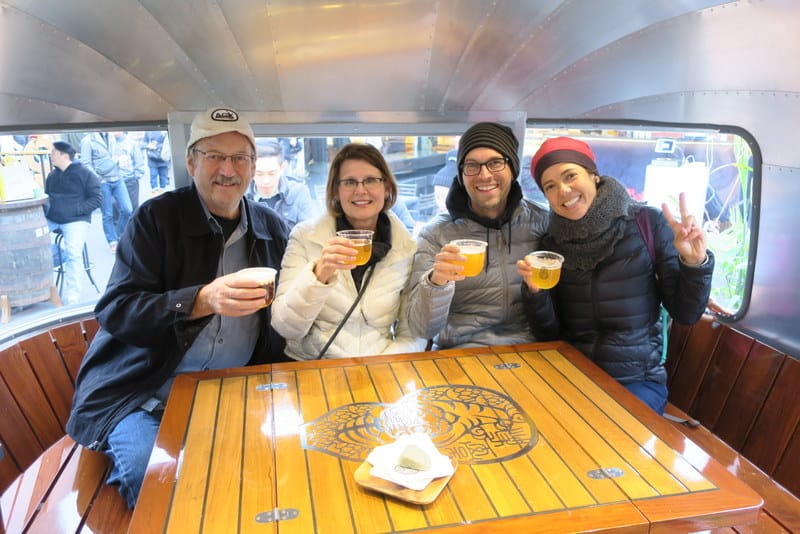 Pickles’ brother has 3 kids so this is for them. Don’t worry, Kathy is just as proud, but Grandma Tea wasn’t up and running yet. 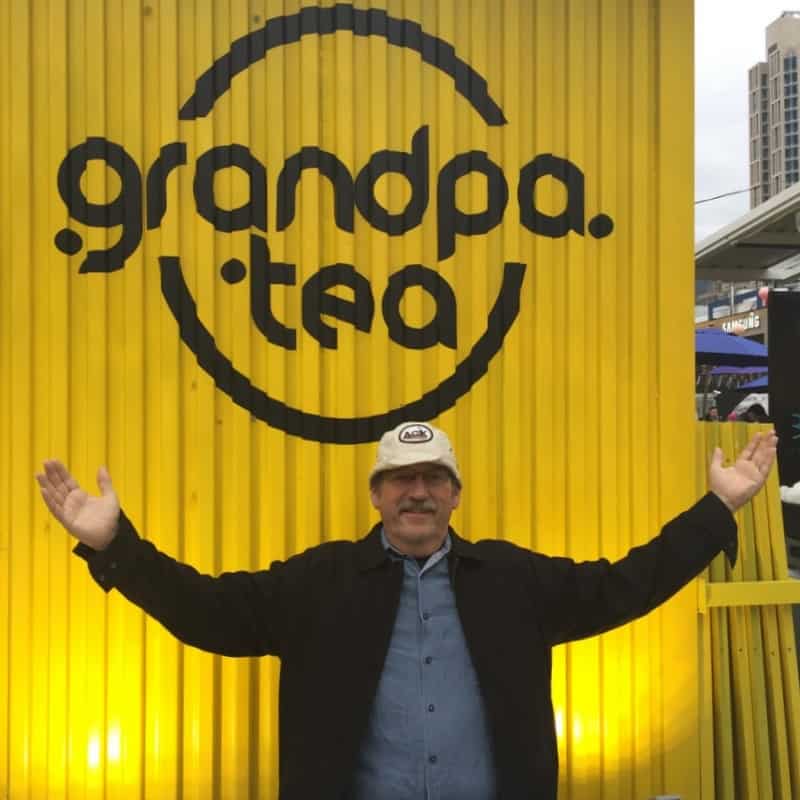 Thanks for coming all the way over here with your adventurous spirits. You win for longest flight / most miles traveled to get here. We know it wasn’t the way the crow flies, but you made it and we cherished every minute.

SUBSCRIBE BY EMAIL. Check spam for confirmation email from “Admin”

2 thoughts on “Guests: The Berggrens”