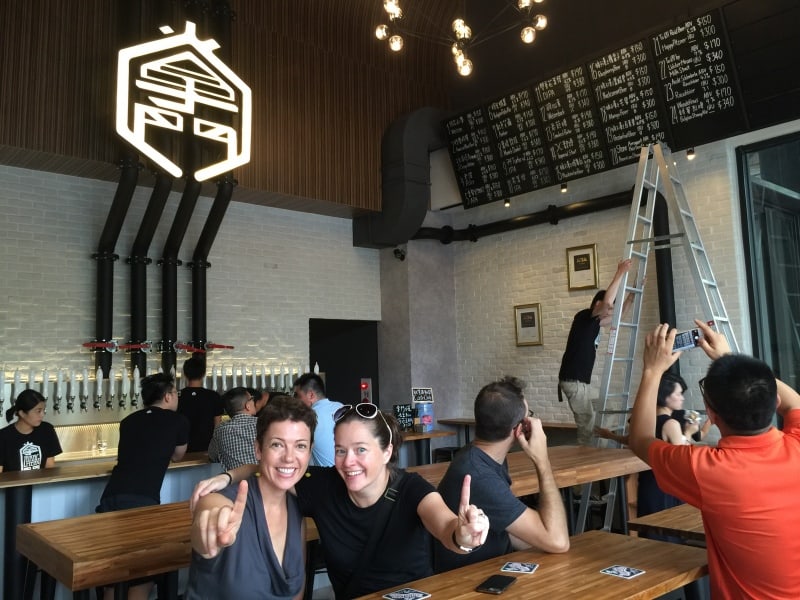 Taiwan at the Tipsy Point

Exciting news for those of us living in Taichung.  This past weekend, ZhangMen Brewery opened their second taproom in Taiwan in our town of Taichung.  We read on their Facebook page that they were having a soft opening on Friday at 5.  We were outside their door at 4:59.

We are number one!

ZhangMen currently has 24 beers on tap, 19 are their own recipes brewed in Taiwan and the other 5 are imported.  We were told that they plan to expand to have 32 taps in total.

Why this is so exciting:

When we first arrived in Taichung at the end of 2015, the craft beer scene was pretty limited.  This is because Taiwan Beer is pretty embedded in the country.  Is is the only beer that can be brewed within city limits.  All other brewers have to brew outside of the city.  Taiwan Beer is fine for a light lager, but their other “flavors” are not good.

We conveniently moved to an apartment near Taichung’s largest bottle shop ChangeX in February.  ChangeX had 4 taps and a reasonable selection of bottles from around the world.  They have since expanded to have 8 beers on tap and significantly expanded their bottle selection.  Now we can get Deutsche’s beer from Bend Oregon, Speakeasy, Stone, Founders and others at our local convenience store, Carrefour.

The best locally brewed beer is currently brewed in our friend Kevin’s apartment – he usually has 4 beers on tap!

Brewing around the island

We visited the office of Taihu Brewery up in Taipei by complete accident.  We were just looking for their beer, but ended up in their offices because that was the address on their Facebook page. We found out that they have started importing a number of beers from the states and the are available in their 2 tap rooms up in Taipei.

Not only can we get good imported beers but there are more and more craft brewers starting up in Taiwan with a taste for hops.  We met one of the small craft brewers, Ray and enjoyed his Hat Trick APA after seeing his bottle shop on the way home from the earthquake museum.