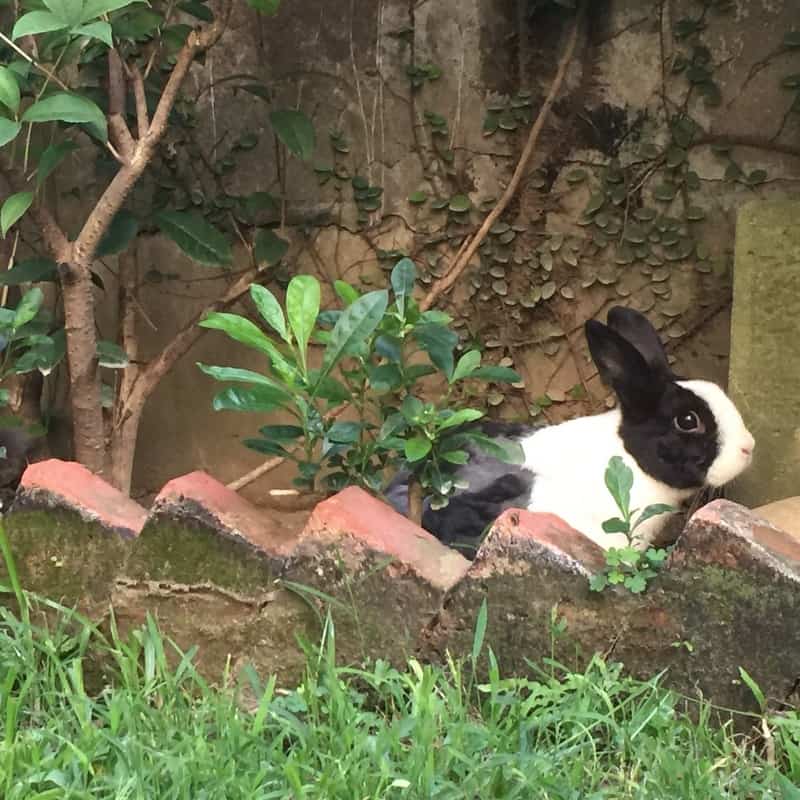 There is a place, in the urban chaos, where bunnies frolic amongst their own. It’s called Two Rabbits Cafe 兔兔窩

People bring their pet rabbits to this cafe and they frolic about with other pet rabbits. Humans can relax, order some food, a tea and then pinch themselves asking… “Is this for real?”

It is. It’s Taiwan Magic.

A couple days prior to this magic, I was at a writing cafe, called Still Light, 覓靜拾光鋼筆咖啡廳. It’s a place that offers beautiful (and some expensive) calligraphy supplies such as pens and paper for those who want to hone their calligraphy skills or who simply want to write a letter, at no cost. I was here, practicing my Mandarin calligraphy, when I met Guan Ming. He’s a biology teacher on summer break, who was also practicing his calligraphy. It’s a thing here.

I learn that Guan Ming has 4 bunnies

Let me back up even more. Just a day before this I was expressing the void of animals in my life to my husband, specifically the void of a Corgi named Lulu and a wobbly cat named Poppy. We made the right call in not bringing them to Taiwan though. It’s a very long trip for two senior animals (who must fly in cargo on international flights) who then need to be quarantined for 21 days. And there’s a slew of shots and blood work that need to be given prior to leaving your home country. And it’s really hot here for a dog not used to 100+ temps. And our lease wouldn’t allow it anyway. Both pets are in very loving homes back in the USA. Poppy is in Nebraska with Team Toth and Lulu is in Montana with my family. Still, it doesn’t mean we don’t have heart pangs for them.

So… I ask my new friend, “FOUR BUNNIES! What are their names?”

It turns our Guan Ming is going to Two Rabbits Cafe later in the week and invites me. Or did I invite myself? It’s all a blur. I put “Bunny Guy” on our shared google calendar so I won’t forget. Scott inquires… “Who is this Bunny Guy?” Don’t ask, just join me. He’s skeptical, but I insist he come.

Two Rabbits Cafe is a bike ride from our apartment, located in a quiet alley. It’s run by two sisters, who took the business over from their grandmother. They live with their parents and grandma on the property, above the cafe. Coincidentally, one of the women is getting ready for a trip to Billings, Montana. Someone from her host family (she used to live in Montana) is getting married so she and her mother are going. Small world!

And there, sitting at a table in Bunnyland, is Guan Ming (aka Bunny Guy) with his four fluffy bun-buns flopped in the shade behind him.

I pinch myself a few times… and say, “only in Taiwan” 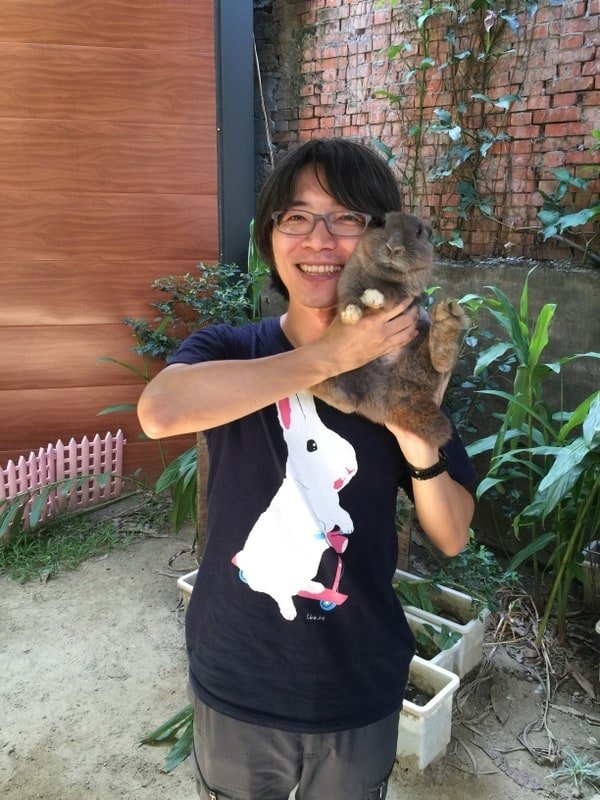 Here’s Guan Ming, rocking an awesome shirt and holding Duō Duō, which means “much much or many many”. 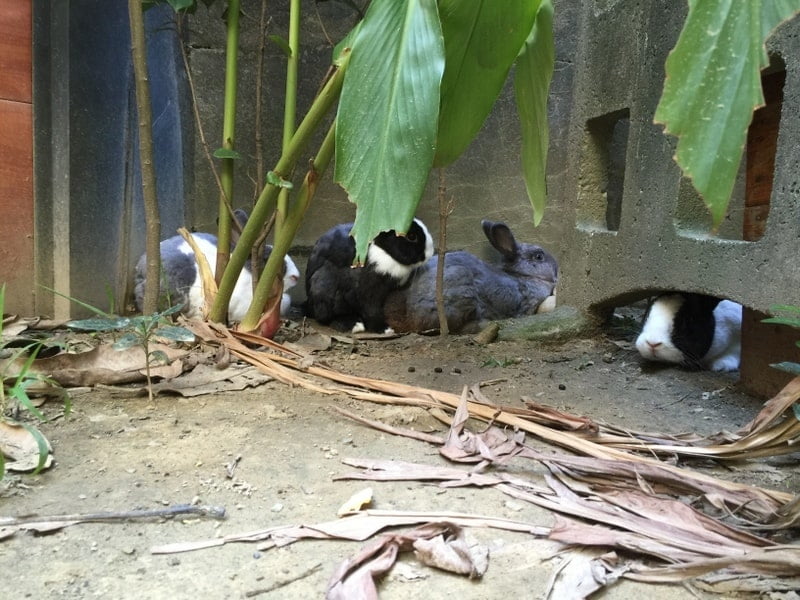 These are Guan Ming’s rabbits… JuJu, Rocket, DuoDuo and Oreo. Oreo is a feisty one. JuJu likes to groom everyone. DuoDuo is the mama and Rocket is just badass. 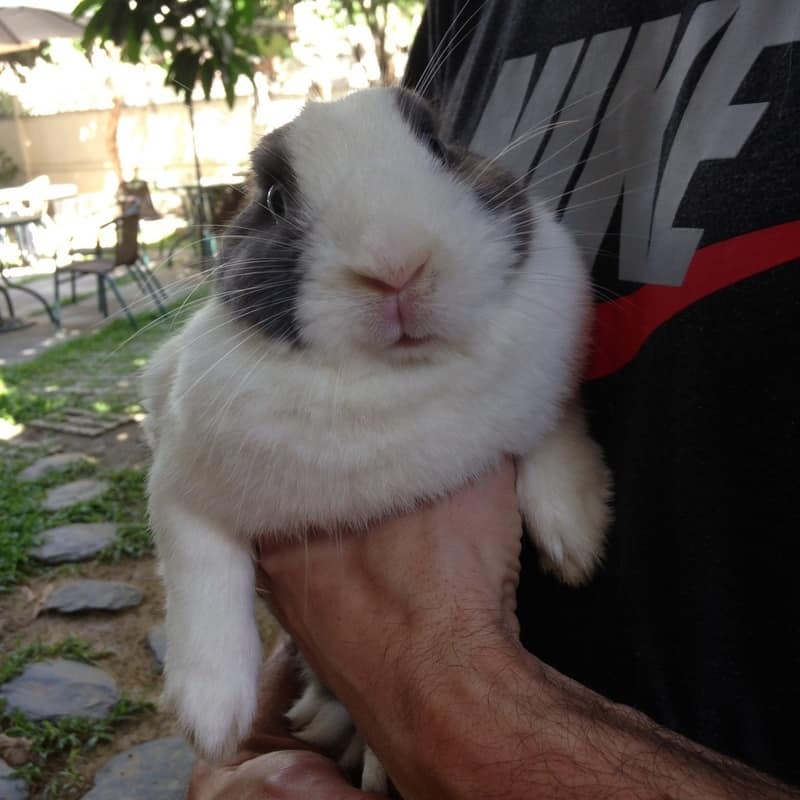 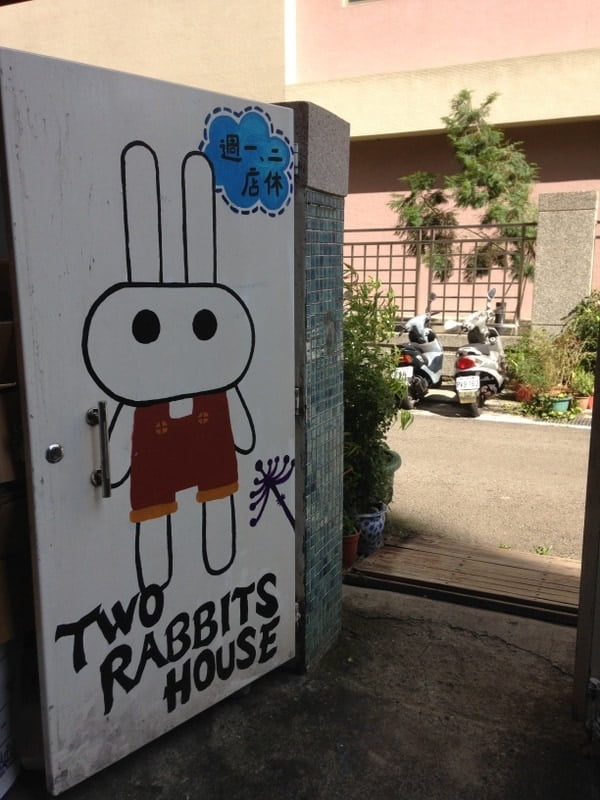 The name of this place in Mandarin is 兔兔窝, which translates to Tù tù wō which literally translates to Bunny Nest. Based on the door sign, I think there’s some word play going on, which is common. 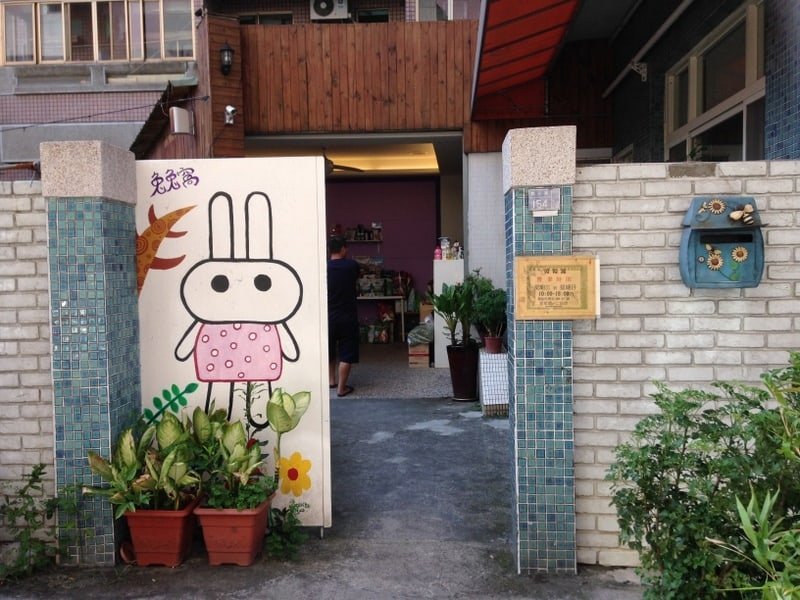 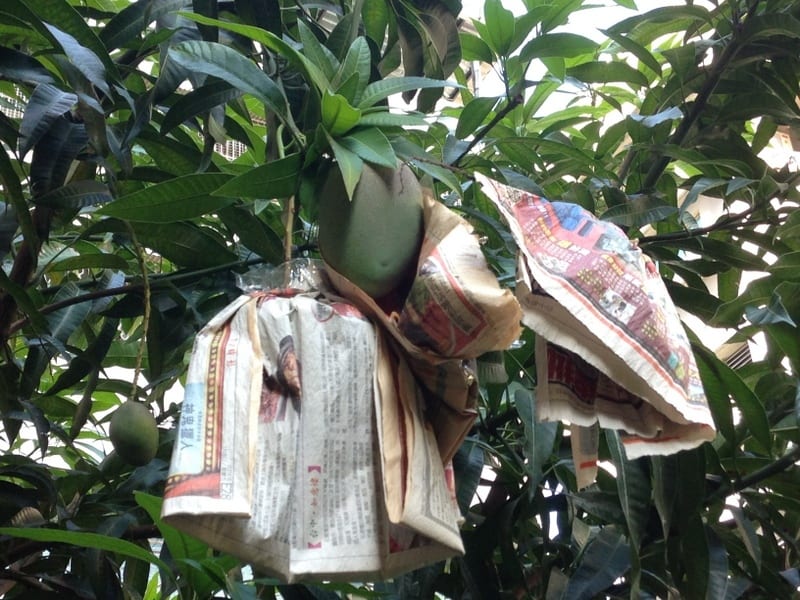 Because it’s a magical place, there’s a mango tree in the yard. Fruit is often wrapped with paper as a natural bug repellant. 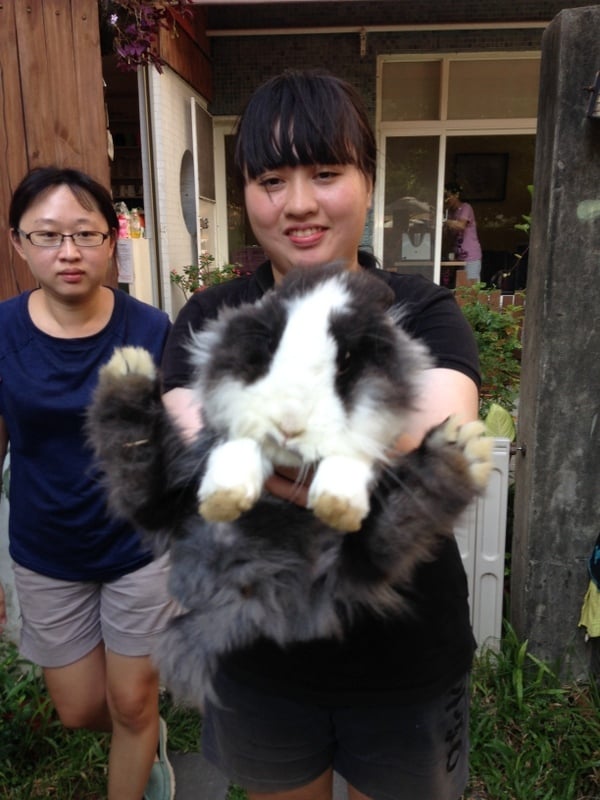 The young women who run the place have a rabbit, her name is Mrs. Big. 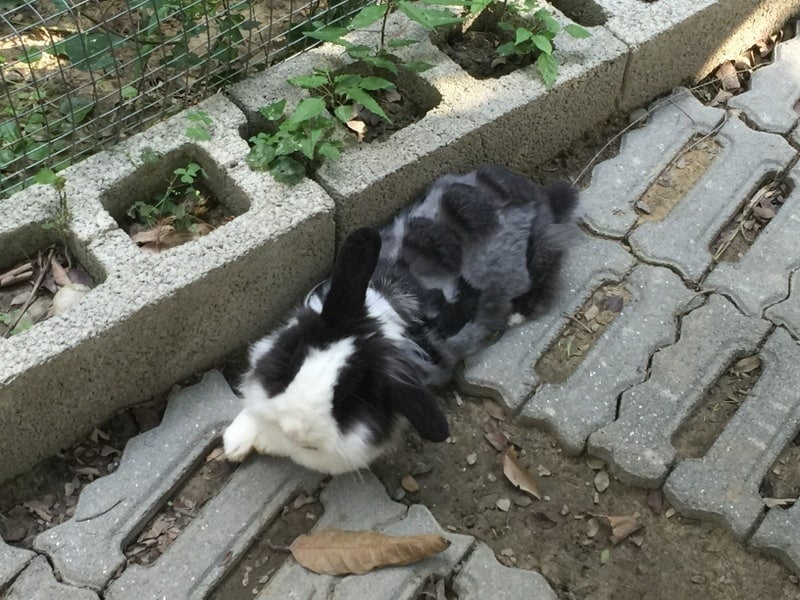 Mrs. Big has a special coiffe. 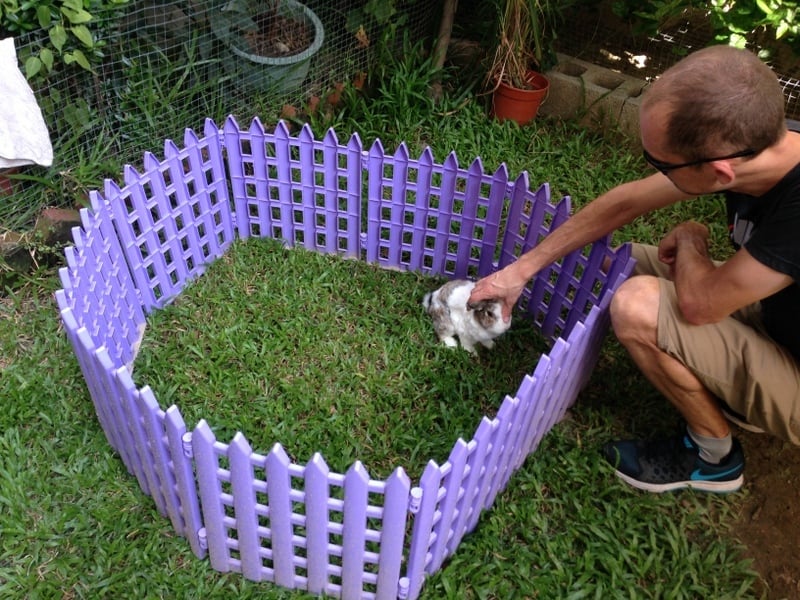 Bunnies that aren’t fixed require special play pens. There’s a larger pen in the back of the yard… incase it gets busy. 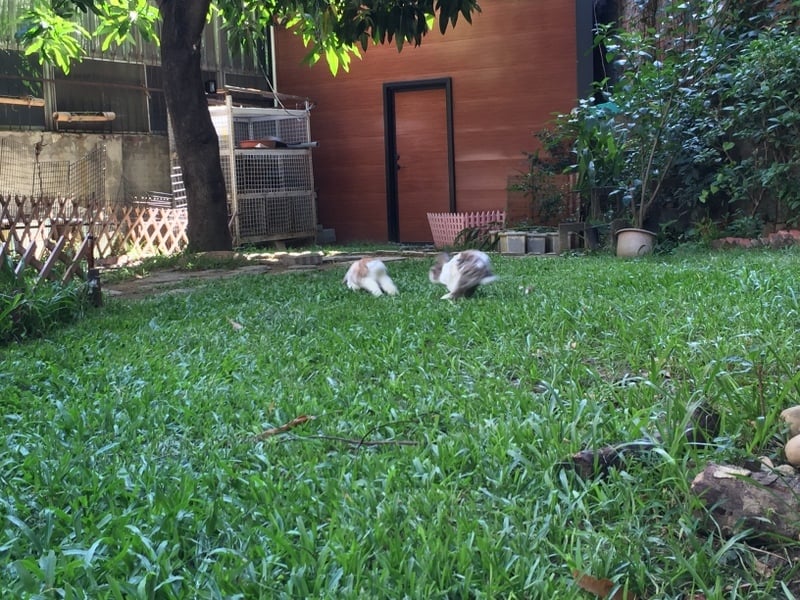 Sit back, sip your tea and watch the bunnies frolic. 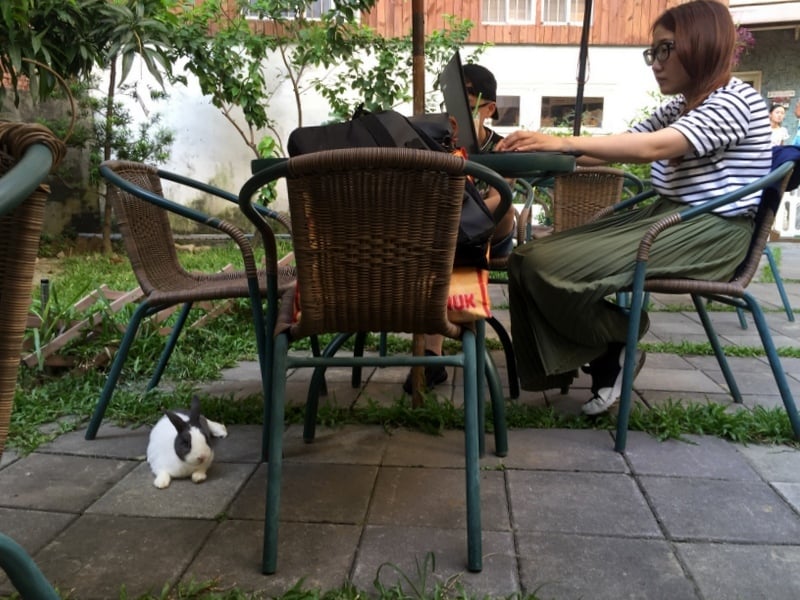 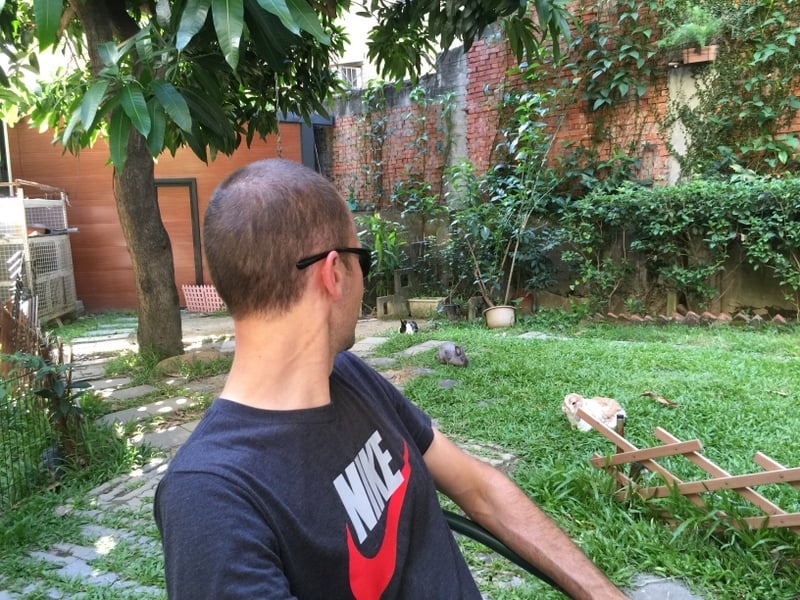 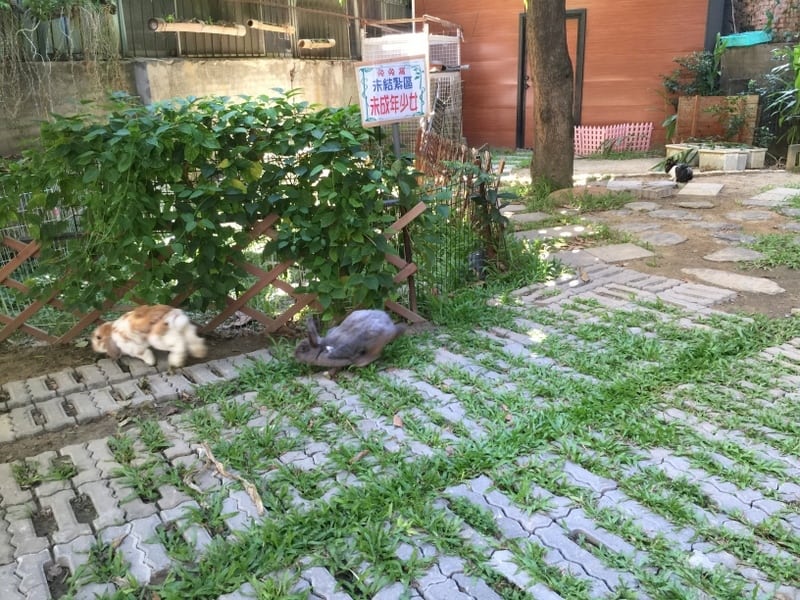 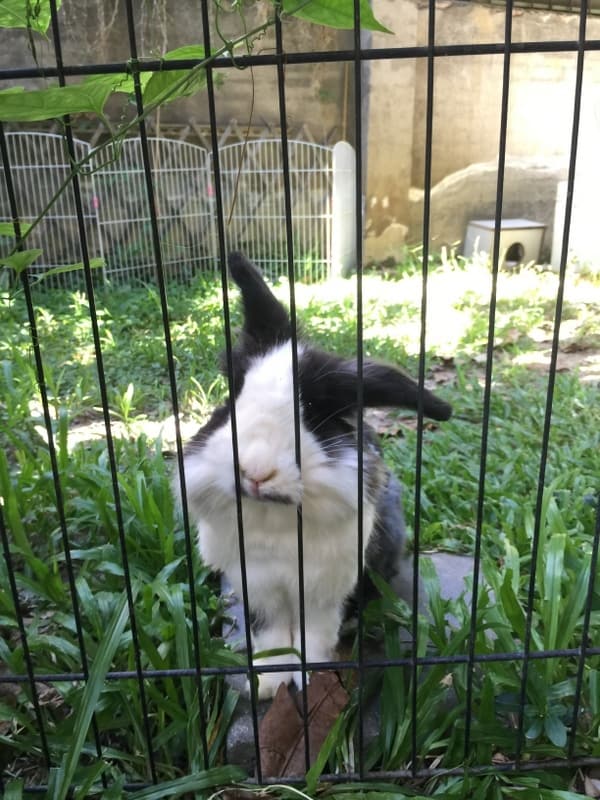 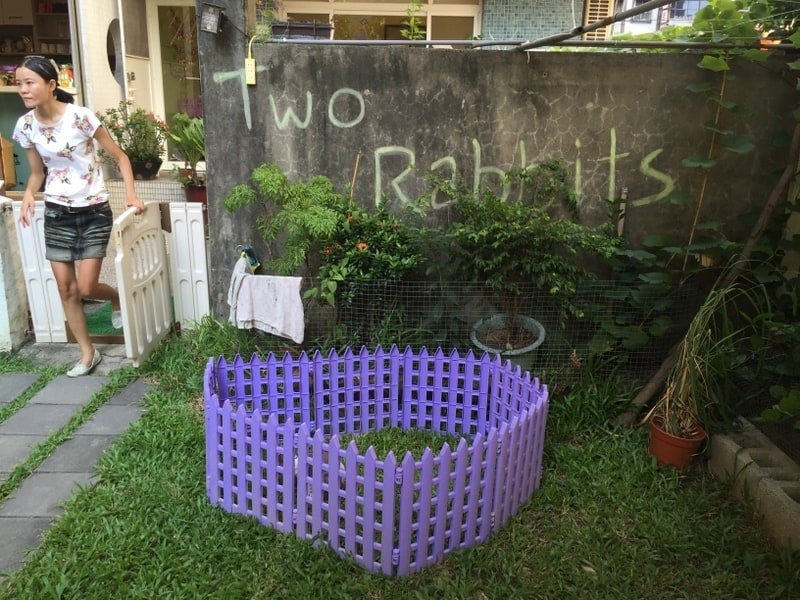 The gal on the left brought her bunny, which is in the pen because it’s not spade. See her shirt? Somehow I missed the memo to wear my bunny prints! 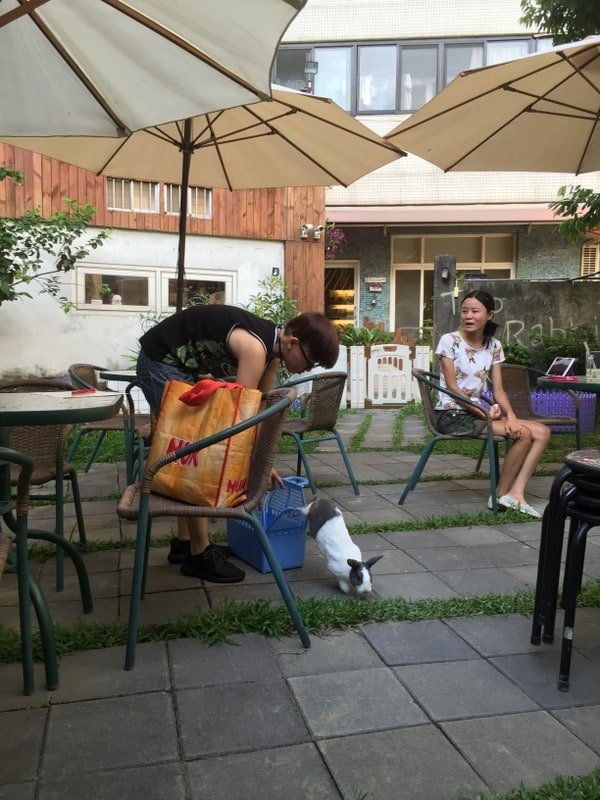 Another bunny customer! It’s getting busy around here. 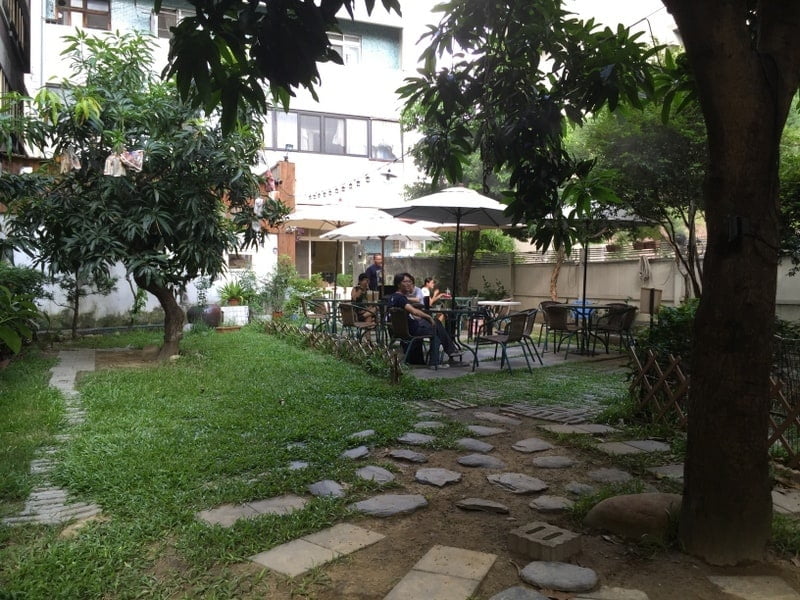 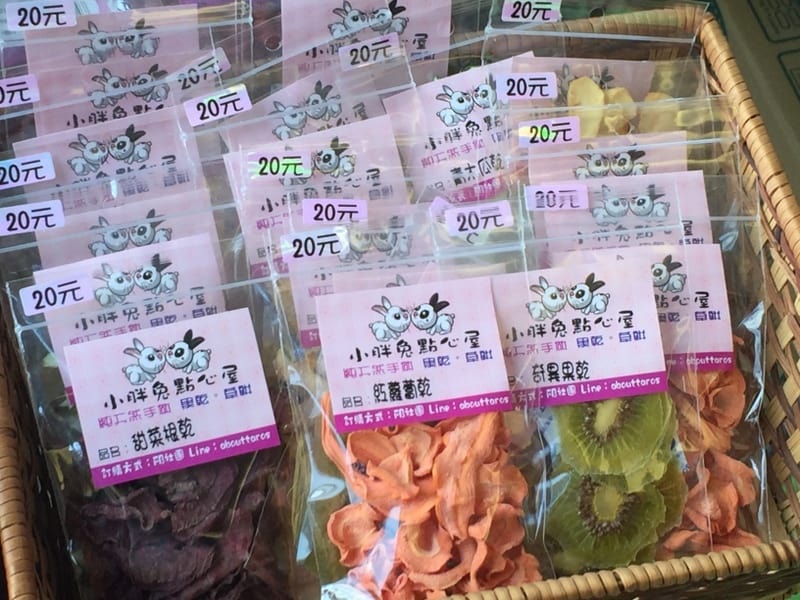 These bunnies eat healthier than we do! 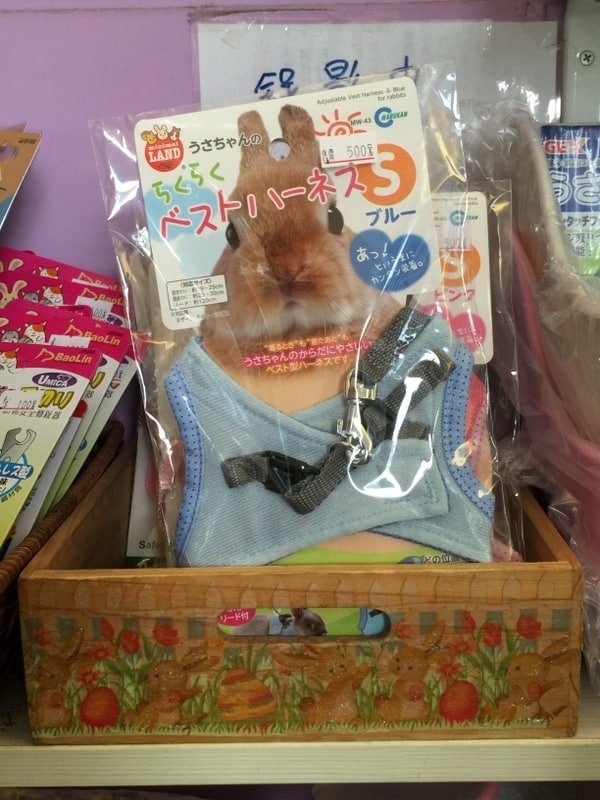 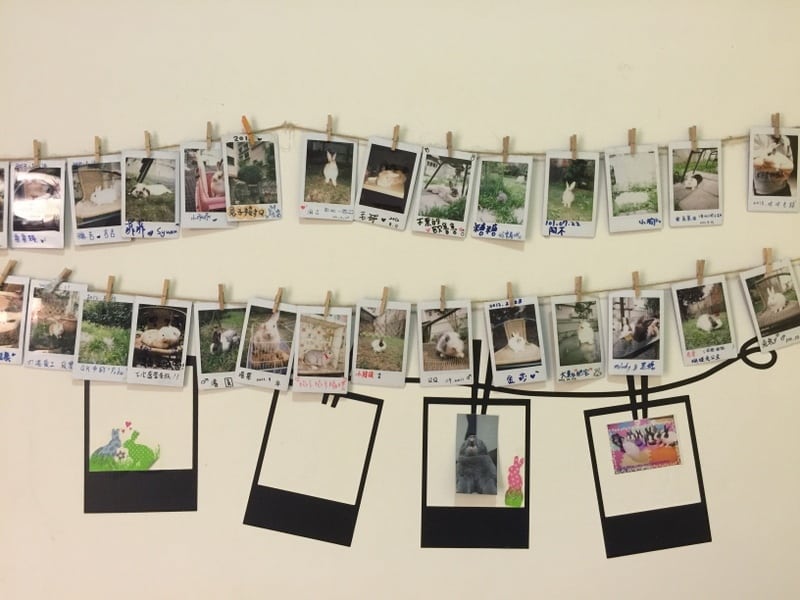 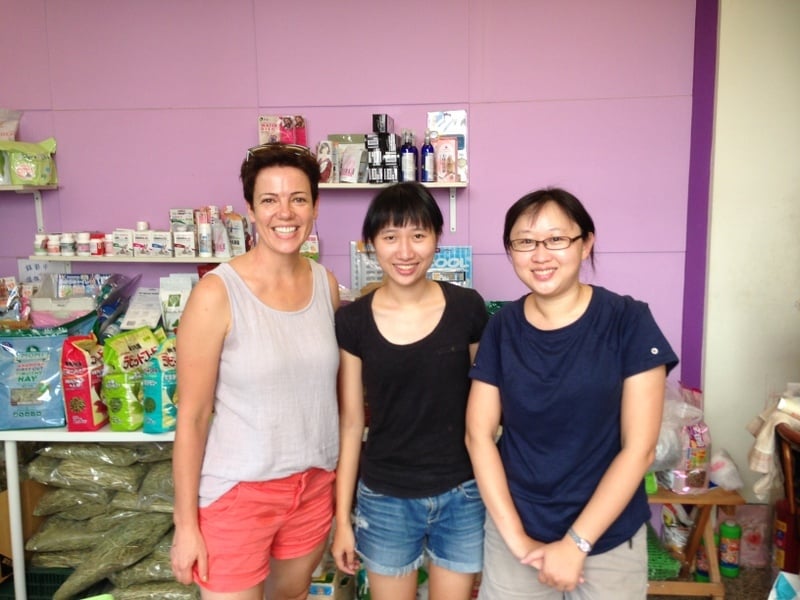 The sisters who run Two Rabbits Cafe (who insisted I be in the photo).